Please ensure Javascript is enabled for purposes of website accessibility
Free Article Join Over 1 Million Premium Members And Get More In-Depth Stock Guidance and Research
By Sushree Mohanty - Nov 24, 2020 at 6:50AM

Despite all their woes, these two Canadian pot stocks still have investors in their grasp.

In the face of financial and funding hurdles as well as state and federal discrepancies in the law, U.S. cannabis companies have done exceptionally well this year, driven by a surge in cannabis demand amid the pandemic. But two big-time Canadian pot stocks, Aurora Cannabis ( ACB -6.19% ) and Canopy Growth ( CGC -4.20% ), remain investor favorites. Both companies had a tough 2019, owing mostly to external headwinds that gripped the sector. They they have clearly managed to rebound, in some business areas, in 2020. On Nov. 9., Aurora released its first-quarter fiscal 2021 results and Canopy reported second-quarter fiscal 2021 numbers.

Aurora's stock is down 36% since then, while Canopy is down 0.73%. (For perspective, the industry benchmark, the Horizons Marijuana Life Sciences ETF gained 1.45% since Nov. 9.) So far this year, shares of Canopy have gained 15%, while Aurora's stock has slumped 72%. Meanwhile, the industry benchmark is down 12% over the same period. But their share performances might not tell the whole story. Let's take a look at the companies' quarterly reports and determine which of the two is the better cannabis pick. 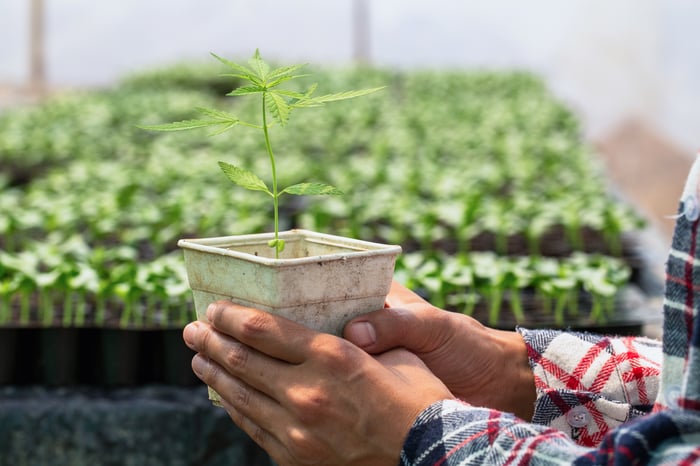 Aurora Cannabis is working hard to rebound, but is it doing enough?

What's worrisome is that Aurora reported higher earnings before income, tax, depreciation, and amortization (EBITDA) losses this quarter of CA$57.8 million compared to a loss of CA$33 million in the year-ago quarter. EBITDA losses jumped from an already high CA$32.2 million in the fourth quarter of 2020, mostly because the company had to incur legal settlement and contract termination fees. Other costs in the quarter were associated with workforce reduction -- a part of Aurora's business transformation plan announced in June.

Aurora assured investors again this quarter that the company will achieve positive EBITDA by the second quarter of fiscal 2021. However, I think the target is nearly untenable. The company has worked to reduce its selling, general, and administrative (SG&A) expenses, which fell by CA$19.6 million in Q4 to CA$46.9 million in Q1. But Aurora needs to grow revenue at a higher rate and reduces expenses further to even get closer to making profits.

The goods news is that Aurora managed to reduce its capital expenditures this quarter to CA$13.2 million from CA$16.4 million in Q4. One method that can help Aurora hit its EBITDA goal is to focus on new derivatives products to find new revenue growth -- but they have to reduce costs when doing so. The company's Reliva acquisition in March could also prove fruitful in finding revenues from the U.S. cannabidiol (CBD) business. Aurora acquired the hemp-derived company for $40 million of its common stock. For the three months ended Sept. 30, Aurora earned CA$1.7 million in revenue from Reliva following the completion of the acquisition on May 28. At the time of the deal, Reliva was one of the largest CBD brands and had its products on the shelves of nearly 20,000 stores across the country.

Canopy Growth's second-quarter fiscal 2021 results for the period ending Sept. 30 brought better news. The company saw a 77% jump in reported revenue to CA$135.3 million compared to the year-ago quarter. The rise was mostly driven by a 15.5% increase in Canadian recreational cannabis revenue. Canopy reported another adjusted EBITDA loss in Q2, this time of CA$85.7 million, but they came in better than CA$150.4 million in Q2 2020, thanks to a dip in SG&A expenses by 19% to CA$147 million from the prior-year period.

Another thing to applaud in Canopy's Q2 results was its successful "leadership position in the cannabis-infused beverage segment." As the company stated in its press release, it has now acquired a 54% dollar market share with its five ready-to-drink tetrahydrocannabinol (THC) cannabis beverages marketed under the Tweed, Houseplant, and DeepSpace brands. The global cannabis beverages market could grow by a compound annual growth rate (CAGR) of 18% to $2.8 billion by 2025, according to Grand View Research.

Dominating the cannabis beverage market at an early stage will give Canopy a competitive advantage in the cannabis derivatives segment. Canopy already has a strong partner in Modelo and Corona magnate Constellation Brands ( STZ 0.10% ) and can take advantage of Constellation's network to launch its cannabis beverages in the U.S. market. Both companies entered into a strategic partnership in Oct. 2017, when the alcohol company invested an initial CA$245 million in Canopy.

Neither of these cannabis companies is in a stable position yet. Revenue growth isn't quite balanced with consumer demand, and neither has made a profit yet. After some rash decisions and aggressive spending on acquisitions last year, both will have to take some strict cost-cutting measures in 2021 (think shutting down unproductive facilities and making workforce reductions) to tighten their cost structures.

Though Aurora's efforts cannot be ignored, it still has a rocky path ahead. Given a choice between these two, my pick would be Canopy Growth. Its partnership with a U.S. beverage giant gives it an edge to strengthen its position in the American market. This partnership is also keeping Canopy's pockets deep. Aurora doesn't have comparable external financial backing. One day, Canopy can also utilize its acquisition deal with U.S. hemp-based company Acreage Holdings, which won't be finalized until the federal legalization of cannabis in the U.S. This deal will eventually expand its derivatives products' reach in the states.