Can Gap (NYSE:GPS) breathe life back into its Gap brand? The company's eponymous stores have been one of its biggest losers over the past few years, and it's struggled to define the brand's identity. With improving sales for the company as a whole in the third quarter, driven by a 61% increase in online sales, management released a new strategic plan in October to run with the momentum. But those new plans for the Gap brand look like a big mistake.

Gap was once the leader in fashion apparel. When I was in high school, a Gap store was the coolest place to shop. While it's still the largest U.S. apparel retail company, with $16 billion in 2019 annual sales, the company as a whole, and the Gap brand in particular, have seen waning sales over several years, and the retail company's stock has dropped along with it. Even Old Navy, its tried and true growth brand, along with Banana Republic, started to falter. Athleta, a women's activewear brand that accounts for a small percentage of sales, has been its only growing brand. 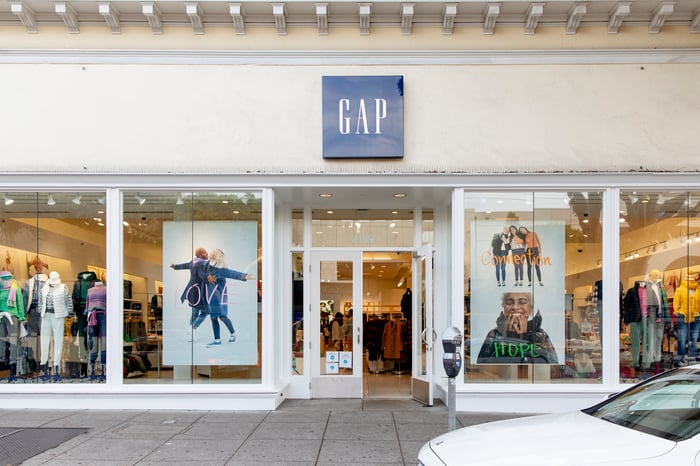 What changed during the pandemic

Activewear has been on the rise as a trend for a while, growing 8% annually between 2017 and 2019, according to market research company The NPD Group. The pandemic lifted that trend, as people staying home wanted to wear comfortable clothing. And with basics being Gap's sweet spot along with its top-notch digital options, the company's brands suddenly seemed relevant again.

This led to a 13% companywide comps increase in the second quarter despite a sales decline, and a 5% comps increase in the third quarter powered by strong digital demand. Coming right after the company's announcement that it wouldn't pay store rents because of its precarious financial situation, that was good news. In the midst of growing success, CEO Sonia Syngal, who started her new role in February, and her team developed Power Plan 2023, a strategy to deliver improved results over the next three years.

That strategy included a transformation plan for the Gap brand, but one that's woefully underwhelming. While boosting Old Navy's success through more competitive shopping options and doubling down on Athleta's potential with a focus on products seem like reasonable, actionable goals, "transforming the Gap brand" through restructuring the store fleet and enhancing digital seems out of touch. Former CEO Art Peck developed a store restructuring plan last year, and digital has always been the brand's best hope. But that was never enough.

Management said that Gap brand has the "right brand" at the "right time," which is helping it grow market share. This is true and may continue to be true as digital grows and casual becomes the new look. But what happens when that time ends?

No plans for real change

In other words, there aren't any real plans for change, and management seems to be merely pinning its hopes on shifting retail and fashion trends, largely to activewear. But there are so many competitors in this field that do have strong branding, such as Nike and lululemon athletica. There are also major companies getting in on the trend, such as Target, which recently released its own discount activewear brand, All in Motion, and American Eagle Outfitters, which is popular among its teen market and just launched its Offline by Aerie activewear brand. So where does Gap, as a brand, stand out?

Pretty hard to say. Although the company said it will transform the brand through technical details, what Gap can do right now is use the momentum to connect with customers, use data to hone in on what's working, and then carry out an updated branding scheme.

Although the retailer's shares lost value over the past three years, investors impressed with its performance during the pandemic have bid it up 38% year to date. Old Navy and Athleta may indeed see growth, but without clearer direction and a distinct identity, the Gap brand may not be able to stand out among its peers. Digital strength will lead it into the future, but long term it may sap the energy out of the company once again.