Just a few years ago, General Electric (NYSE:GE) was a popular dividend stock. Then it slashed its dividend by a total of 96% in the span of 12 months.

As a result, most dividend-focused investors have taken their money elsewhere. After all, GE stock now pays a quarterly dividend of just $0.01 per share, putting its yield at a paltry 0.4%. Nevertheless, GE could be an excellent dividend growth stock for investors with a long-term mindset.

GE imploded in spectacular fashion a few years ago, following numerous missteps over a period of many years. First, the storied industrial conglomerate made several bad acquisitions. The businesses it purchased turned out to be cash pits, and GE ran up a huge debt load in the process of buying them. (Ill-conceived share buybacks aggravated this problem.) Additionally, weak market conditions and poor business decisions led to losses in some of GE's other business lines. Meanwhile, low interest rates caused its pension plan to become severely underfunded. Lastly, the company discovered a massive shortfall in the reserves for its legacy insurance business, due to surging long-term care costs.

For a while, long-serving GE CEO Jeff Immelt and his lieutenants resisted cutting the dividend. However, Immelt retired in 2017, and his successor lasted barely more than a year. Deteriorating results -- GE's power and renewable energy segments posted a combined profit of more than $5.5 billion in 2016 but were collectively unprofitable in 2018 and 2019 -- left management desperate to retain as much cash as possible. 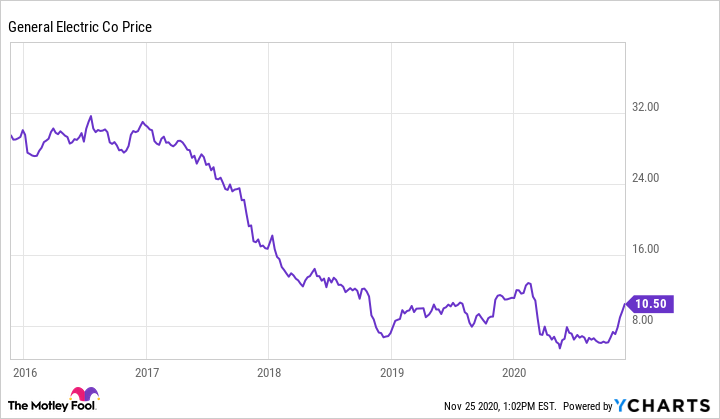 The past is the past

While GE has been a bad dividend stock over the past five years, the future looks very different. For one thing, GE has made a lot of progress repairing its balance sheet, helped by its dividend cuts, which are saving it approximately $8 billion annually.

As recently as the end of 2017, GE had gross borrowings of $134.6 billion. As of last quarter, it had whittled that down to $79.5 billion, mainly using the proceeds of a slew of asset sales. GE also ended September with $39.2 billion of cash on hand. It is deliberately holding more cash than usual due to the uncertain business environment, but it will eventually use its excess cash for additional debt reduction and pension contributions. GE also plans to monetize its stake in Baker Hughes over three years, which would net about $7 billion based on the latter's recent trading price.

Just as importantly, CEO Larry Culp has spearheaded aggressive restructuring and cost-cutting efforts to bring the troubled power and renewables units back to consistent profitability and cash-flow generation. These efforts are starting to bear fruit: Both of those business segments were profitable last quarter, something that hadn't happened since 2018.

In the short term, GE does face severe headwinds in its largest and (typically) most profitable segment: aviation. However, with COVID-19 vaccines on the way, aircraft utilization should increase steadily over the next couple of years, driving a rebound in GE Aviation's high-margin service revenue. In the long run, aviation remains a lucrative growth business.

Dividend growth could come before long

General Electric will probably wait until it has reached its leverage target before increasing its dividend. Initially, it had hoped to reach that milestone by the end of 2020. The pandemic has delayed things, but it should still be possible to finish fixing the balance sheet within a year or two.

Once that happens, GE could move fairly quickly toward its long-term goal of having a dividend in line with peers. This likely implies a payout ratio between 30% and 50%. While that rules out a return to GE's pre-2017 quarterly dividend of $0.24 per share, it could be consistent with quarterly dividends in the vicinity of $0.10 per share just a few years from now. Based on GE's recent share price, that would put its dividend yield at around 3.8% -- more than double the S&P 500's current yield.

The past few years have undoubtedly been extremely painful for GE shareholders. Nevertheless, with new CEO Larry Culp slowly but steadily returning the company to health, GE could turn into a great dividend stock for patient investors.