Among the online brokerage firms, Robinhood is certainly the one that gets the most media attention. Its appeal to younger investors, gives insight into what the next generation is interested in. Not surprisingly, tech and growth names lead the list of Robinhood's most popular stocks. While some of these have had great financial success, others show the exposure to speculation that this demographic of investors seem to be overly comfortable with.

These are three stocks Robinhood investors are interested in, as of Nov. 27, 2020.

Amazon (NASDAQ:AMZN) is consistently on the list of top stocks Robinhood investors are interested in. It's not hard to see why. Robinhood appeals to the younger crowd. That demographic loves tech companies, and Amazon is one of the clearer winners among Robinhood's most popular stocks. Over the last three years, Amazon shares have gained over 150%, handily outpacing the market. Its disruption of traditional retail has been unrelenting, and investors have embraced it.

This year has only helped the story. COVID-19, the subsequent economic shutdown, and social distancing all led consumers online to do more of their shopping.   Names like Amazon, Walmart, and Target all had distinct advantages in comparison to smaller operations when it comes to maneuvering this kind of tumultuous event. After the shutdown ended, Amazon has continued to benefit from social distancing. Third quarter sales ended September 30. increased a whopping 37%. 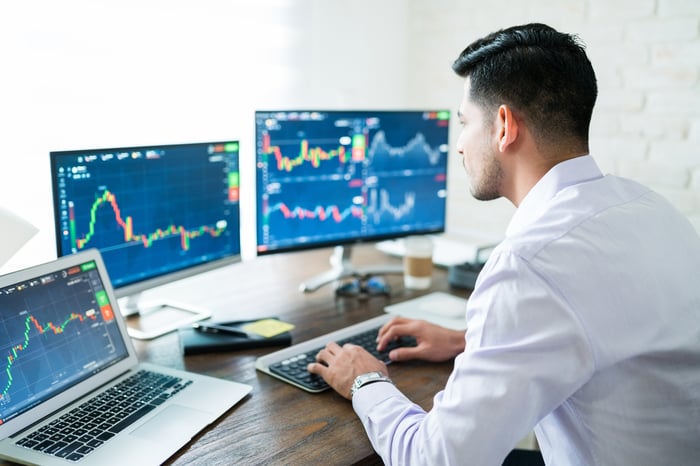 The e-commerce titan recently launched its online pharmacy business in the United States, furthering the company's attempts to leverage price and online convenience to derive market share in new spaces. Not everything Amazon does always works, but if the company can offer a better deal in terms of pricing and convenience, it's hard to see Amazon Pharmacy not adding value to the company.

No lack of love for cannabis

Aphria (NASDAQ:APHA) can be found jumping around near the top of Robinhood's top 100 most popular stocks. The Canadian marijuana company was once one of the favored front runners in the industry due to its profitability as a medical marijuana supplier. Of course, the hype surrounding the market became a bit speculative. The large names within the space including Aphria, Canopy Growth, and Tilray have all taken heavy losses as they have scaled up production to compete.

Accusations by short-sellers that the company's top executives were making investments in useless entities for profit led to a bit of chaos for Aphria. Since CEO Vic Neufeld stepped down, investors are more focused on sales and the bottom line. Revenue growth has been phenomenal.

After the shakeup in management, Aphria continues to seek scalable profitability. Revenue growth has been substantial, but losses continue to be significant. For the last fiscal year ended in May 2020, Aphria had reported annualized revenue growth of 128.73% to 542.34 million Canadian dollars. Through that same time frame, losses increased 450% to $90.81 million. The losses continue to be a drag for the stock. While sales growth has been tremendous, the bullish sentiment can't break free of the lack of profitability.

At the beginning of November, news broke that Aphria was buying U.S. based Sweetwater Brewing for $300 million. The brewing company uses hemp to create cannabis flavors in its beers. Part of the strategic reasoning provided by the company was that Sweetwater set the company up for easier access to the U.S. market if the government legalizes cannabis at the federal level.

Estimates don't call for Aphria to start producing profitable earnings until 2023. Of course, if estimates were always right, investing would be a pretty easy game. This is a situation where shareholders could see big returns if the company can shift to meaningful profitability, while avoiding overextending itself to do it.

The company has expanded in Europe, serving as one of the main medical suppliers for Germany, with operations in other countries as well. The Sweetwater acquisition takes Aphria into something new. Of course, the desired integration in which Aphria can sell cannabis infused drinks, will be a tough sell in the U.S. for quite some time. Investors could be waiting a long time to see Aphria start making some real money.

Disney (NYSE:DIS) has been an investment gem for a long time. Today, the company is at a crossroads. COVID-19 has ravaged its theme park business, resulting in a big financial headache. On the flipside, it's foray into streaming through Disney plus, Hulu, and its 21st century fox assets, have all benefited from social distancing.

Finishing its fiscal year on October 3, Disney saw a 23% decline in revenues for the fiscal fourth quarter. The divided nature of their businesses, can be seen in the variations in growth. Media Networks were up 14% for the full fiscal year, while direct-to-consumer/international revenues increased 81%; demonstrating the huge rise in Disney's streaming business.

That subscription revenue wasn't enough to fend off the declines in parks/experiences and studio entertainment, with revenue fallout of 37% and 13% respectively. In all, operating income from parks/experiences shifted from $6.76 billion the year before, to a loss of $81 million in fiscal 2020. Studio entertainment operating income declined 7% to $2.5 billion.

The stock is up since Disney reported earnings on Nov. 12, thanks to losses that were less than expected. Overall, there seems to be a blend of momentum between the overall market rally, combined with expectations that vaccines for COVID-19 will help Disney's parks business get back into the swing of it. Until that happens, Disney faces a tough situation.

Robinhood investors do seem to have an aptitude for stocks that are highly speculative. The most popular stock right now is Virgin Galactic (NYSE:SPCE), a commercial space company with no real sales relative to its valuation. However, the three stocks discussed above are far more appealing when choosing investments.