Because three pharma and biotech companies have reported glowing results from their coronavirus vaccine candidates' trials over the last month, it might seem like the race is over. Even if other companies manage to cross the finish line, their tardiness would mean that they'd only be able to enjoy the scraps left over by the victors, right?

Not if Johnson & Johnson (NYSE:JNJ) has anything to say about it. Despite dismissals from skeptical investors who associate it with baby powder and tear-free shampoo rather than cutting-edge medicines, there's a solid chance that its candidate will make billions. Don't let the delay in getting J&J's results fool you: Its coronavirus vaccine will probably have several edges over the competition. 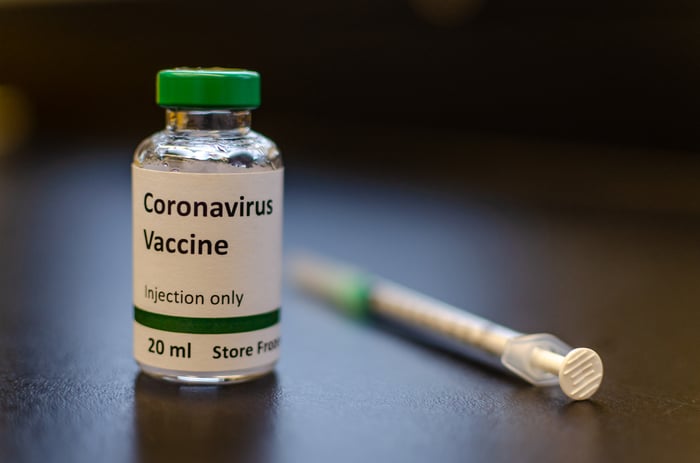 Easy dosing and storage will make for a widely distributed vaccine

J&J has two vaccine trials in the works: one that tests a one-dose schedule, and a newer trial testing a two-dose schedule. Both of these trials use the same platform, which was recently used to produce an approved Ebola vaccine. Its one-dose trial preliminarily reported favorable safety and efficacy data in early October, and investors can expect another update before the end of the year. If everything goes according to plan, healthcare systems should start receiving doses for distribution to the public early in 2021.

Its vaccine will be stable for three months at refrigerator temperature, which makes it compare favorably to competing inoculations by companies like Moderna and Pfizer that require two doses to build immunity as well as deep freezing to ship and store. The cost per dose will also be around $10, which also makes it much less expensive than Moderna's $32 or Pfizer's $19.50. But, AstraZeneca plans to win the pricing war by charging around $3 per dose. Still, if J&J's one-dose regimen is proven effective, it'll be highly competitive.

No short-term profit, no problem

Like AstraZeneca, the company won't be seeking a profit from vaccine sales for the duration of the pandemic. In AstraZeneca's case, the pandemic profit moratorium is scheduled to expire in the second half of 2021, so J&J may follow suit and raise prices after that point. Given that the U.S. government funded its vaccine project to the tune of $456 million, it won't be hurting for cash to finance distribution and production in the meantime.

This is an important point, as the duration of the pandemic may well hinge on how long immunity lasts in inoculated people. If immunity is short-lived, J&J's low-cost one-dose vaccine starts to look a lot more lucrative, as it would require half as many visits to healthcare providers. It'd also mean that J&J wouldn't need to spend as much on manufacturing additional doses to meet demand.

Right now, it's scaling up its production capacity with the goal of reaching one billion doses available by the end of 2021. If sold at cost, that would net the company $10 billion in additional revenue throughout the year. That's enough to make a significant improvement in its trailing revenue of $80.86 billion, even if it doesn't lead to an immediate increase in earnings. Sales could be even higher if it raises prices to make a profit toward the end of the year.

Johnson & Johnson doesn't even need its coronavirus vaccine to succeed in order to remain a profitable and shareholder-friendly company. I'm a perpetual bull on this stock because of the company's deep expertise in profitably marketing consumer healthcare goods, so I'm friendly toward an immediate purchase. But investors should realize now that the beneficial impact of vaccine sales on J&J's bottom line will probably only start to show up in the second half of next year.

And there's a chance that the ongoing trial to measure the effectiveness of the two-dose regimen will find that it is more protective than one dose. That doesn't put a pin in the company's revenue from the vaccine, but it will mean that it will need to spend more to manufacture enough doses to meet demand. So, the benefit to shareholders from vaccine sales would probably be slightly less in that case, but it doesn't change much about the stock's strong long-term growth potential.