Please ensure Javascript is enabled for purposes of website accessibility
Free Article Join Over 1 Million Premium Members And Get More In-Depth Stock Guidance and Research
By John Rosevear - Dec 1, 2020 at 10:21AM

November was another record month for the Chinese electric-vehicle maker.

Chinese electric-vehicle (EV) maker NIO ( NIO 0.41% ) said on Tuesday that it's accelerating a plan to increase its production after setting a record for deliveries in November.

NIO delivered 5,291 vehicles to customers in November, more than double its year-ago result, as demand for its stylish electric SUVs continued to be strong. That total includes 1,518 deliveries of the EC6 sport crossover, the company's newest model, launched in late September. 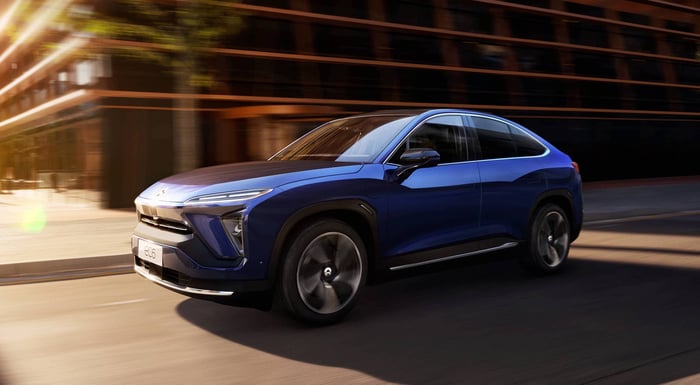 With demand continuing to grow, NIO said that it is now working to accelerate its effort to increase production. During the company's third-quarter earnings call last month, CEO William Bin Li said that the company was working with its suppliers to increase production to 7,500 vehicles per month early next year; it now hopes to have that increase in place before the end of December, it said on Tuesday.

NIO increased its production capacity from about 4,000 vehicles per month to 5,000 in September.

Its fast-growing sales are changing minds on Wall Street. Goldman Sachs analyst Fei Fang, a longtime NIO bear, upgraded it to neutral from sell on Tuesday morning, with a price target of $59, up from just $7.70.

Fang admitted to underestimating the benefits to NIO from its efforts to increase vehicle range, its batteries-as-a-service program, and the positive effect from China's retooled government incentives for EV buyers.

Fang wrote that Goldman Sachs now expects EVs to account for about 20% of China's new-vehicle market in 2025, up from about 5% now.