Marijuana stocks got a much-needed boost from the results of the recent U.S. election. With the Biden administration set to take office amid key legalization victories in a handful of states, America could become a land of plenty for the cannabis industry -- but the majority of marijuana cultivators are far from being safe bets.

Many of the most-discussed companies in the industry are unprofitable despite rising revenue and falling costs. Others can't seem to strike the supply and demand balance in their home market while expanding internationally. Right now, there's no clear leader of the pack, though there are a handful of popular stocks that might be worthwhile. Let's take a close look a trio of these highly watched contenders to see which of the three could be a good stock to trust with $1,000. 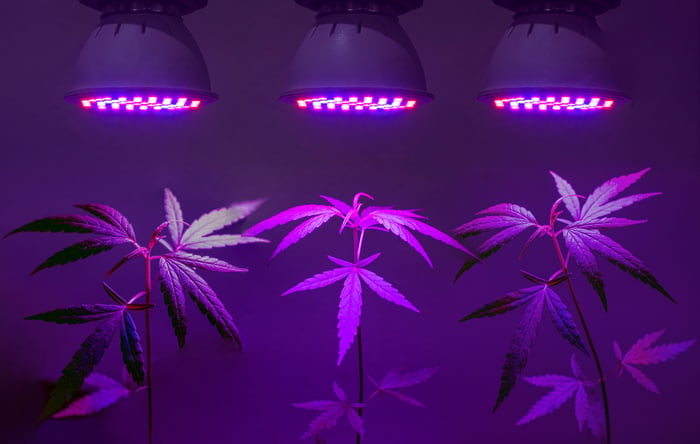 Aphria (NASDAQ:APHA) has the distinction of being the only publicly traded and licensed cannabis company to have a positive adjusted earnings before interest, taxes, depreciation, and amortization (EBITDA) for the entirety of the 2020 fiscal year. Given how much the industry as a whole seems to struggle with profitability, this suggests that Aphria is closer to business sustainability than most of its peers. It's also a sales leader thanks to its retail stores in the Canadian recreational cannabis market, in which it controls slightly more than 29% of the cannabis vaporizers segment.

In 2021, the company is preparing to expand its operations in Germany's medicinal market. Having launched its wellness brands in the country in Q4 2020, Aphria expects its first German harvest early in the new year. At the same time, Aphria is entering the American craft beer market through its acquisition of Sweetwater Brewing Company. Sweetwater makes cannabis-themed beers, and it may be Aphria's opening into the cannabis-infused beverages market in the future. This purchase, made at a cost of $300 million in cash and stock, will enable it to generate as much as CA $70 million in additional earnings each year, which will help finance the expansion of its cannabis brands.

Unfortunately, the acquisition is also why Aphria is a risky investment. Craft beer isn't something that has been established as one of the company's strengths, so the purchase could easily end up being a case of profit-burning "di-worse-ification".  Nonetheless, if you're looking to invest in a marijuana stock, Aphria could be the best option at the moment thanks to its dedication to maintaining positive earnings.

With a fresh CEO and a business transformation plan in full swing, Aurora Cannabis (NASDAQ:ACB) is working hard to turn its fortunes. Selling, general, and administrative (SG&A) expenses fell by 25% over the last quarter, as did research and development (R&D) costs. Making these cuts is something that management has prioritized, and it'll help the company reach profitability faster.

Like several of its competitors in the industry, Aurora is also trying to shift its business from low-margin product segments like unprocessed cannabis flower to higher-margin segments like vaporizers. The change seems beneficial so far, and its gross margins are slowly expanding, rising to 52% in the most recent quarter from 50% in the prior quarter. In the same period, its average net selling price per gram of cannabis increased by 4% while production costs remained constant, suggesting that its shift is proceeding as planned.

But the big picture is still far from ideal. Aurora's quarterly revenue is shrinking at 8% year over year. And, its free cash flow in the 2020 fiscal year was even worse than in 2019, with an outflow of $692.96 million. Avoid creating a new position in this stock until both free cash flow and revenue are reliably increasing for several quarters, preferably without debt rising at the same time.

Steady progress makes for a compelling future at Canopy Growth

Canopy Growth (NASDAQ:CGC) deserves the award for "most improved" cannabis company over the last three years. Free cash flow has grown by 57% compared to the same quarter last year. Notably, Canopy hasn't faced aggressive backslides with earnings in the way that some of its competitors have. Instead, it has simply continued along a consistent trajectory of revenue growth and diligent curbing of expenses. If dogs were investors, this last point is what would make their ears perk up.

But the company is still losing more than $190 million every three months, and its margins remain slim. In terms of its progress toward profitability, administrative expenses have fallen sharply, though there's still a long way to go.

Another positive factor is that it has large market shares in key growth regions. The company performs the best in its lineup of cannabis-infused beverages, where it holds 54% of the Canadian market. But it's also a major player in the German market, where it holds the top spot with its Spectrum Therapeutics brand. Next, it will take aim at the American market, where it has yet to reach its goal of a No. 1 or No. 2 position. So far, its Martha Stewart brand of cannabidiol (CBD) products is its newest offering, but its BioSteel cannabis beverages are also scheduled for wider distribution and faster revenue growth next year.

Between its consistent progress toward market share goals and quickly improving free cash flow, Canopy looks significantly better than Aurora and Aphria as an investment today. Companies with leading market shares aren't as risky as those without, and there isn't any situation in which steadily increasing financial strength is a bad thing. And, if Canopy plays its cards right, it'll continue to gain traction with its high-value recreational cannabis brands. Investors should still keep an eye on the profit margin's progress over time, but for now, there's an opportunity to get in before the crowd.