In a milestone that could eventually signal significant market changes for plant-based meat makers like Beyond Meat (NASDAQ:BYND) and Impossible Foods, a U.S.-based company received legal approval today to sell lab-grown "cultured meat" in Singapore.

Eat Just reports its cultured chicken received the regulatory go-ahead from the SFA (Singapore Food Agency), the planet's first legal approval of the retail sale of meat grown in a lab rather than harvested from an animal. The company describes the product as "real, high-quality meat" grown antibiotic free in bioreactors. It also claims safety inspections by SFA scientists determined the cultured chicken has "extremely low and significantly cleaner microbiological content than conventional chicken" during the approval process. 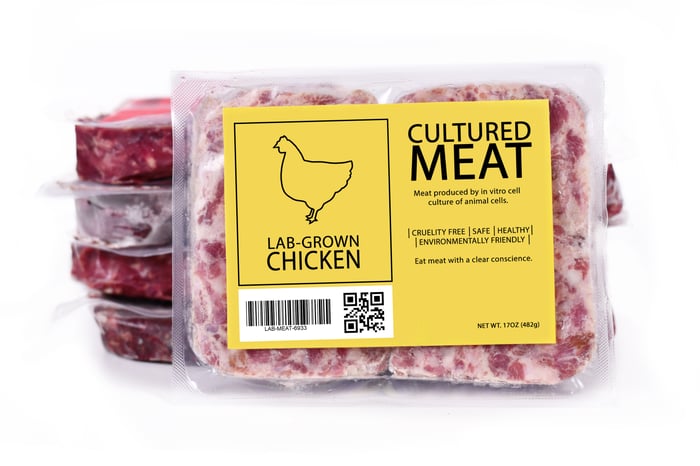 USA Today reports the cultured meat was used in a "chicken bites" product in place of conventional meat. Eat Just's CEO Josh Tetrick told Reuters the company is currently talking with American regulators while working toward permission to sell the lab-grown chicken in America.

Beyond Meat and Impossible Foods view their primary competition as coming from traditional meatpackers rather than each other, at least according to remarks from Impossible's CEO Ethan Brown. Plant-based meat has enjoyed explosive growth in the year of COVID-19 and seems to be a strengthening trend even without the pandemic's boost to the popularity of healthy eating. Grand View Research forecast a 19.4% compound annual growth rate (CAGR) in plant-based meat sales from 2020 through 2027 in a September report.

However, cultured meat has the potential to introduce a new factor into the competitive scene. It sidesteps some of conventional meat's ethical problems, and its production has a small ecological footprint similar to plant-based meat. Today's small "chicken bites" announcement could have major repercussions in the future.