Plant-based alternatives to meat are a rising trend in the food industry. While there are many players in the space, two of the most recognizable brands are Impossible Foods and Beyond Meat (NASDAQ:BYND), so investors assume these are cutthroat competitors. But Impossible Foods CEO Pat Brown disagrees. In an interview with Yahoo! Finance, Brown said, "Beyond Meat is not our competition, and I wish them nothing but success."

If this quote surprises you, then you should definitely keep reading. It's important to frame a narrative correctly. If Beyond Meat and Impossible Foods aren't competing, then who (or what) exactly is the antagonist in this story? 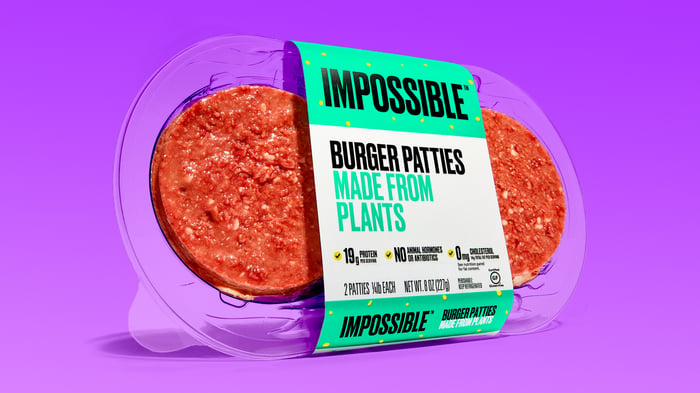 Every good story needs a conflict and an antagonist. For Impossible Foods, the conflict is climate change, and the antagonist is the commercial production of animal protein. From the same interview, Pat Brown also said, "We're relentlessly focused on our 2035 goal of completely replacing the use of animals as a food technology with a technology platform that's not going to destroy our planet."

This sentiment is echoed by Beyond Meat. When registering to go public, the company listed animal-protein competitors like Cargill, Hormel Foods, and Tyson Foods ahead of any plant-based player. It would go on to acknowledge it often competes with Impossible Foods for shelf space. But the company was clear: It's aiming for the entire traditional-meat market, which it estimates at $1.4 trillion.

For Ethan Brown and Pat Brown, founders of Beyond Meat and Impossible Foods, respectively, there appears to be a more urgent motivation than just making a profit. They want to save the earth, and they believe plant-based meats are part of the solution. Producing animal protein is seen as an environmentally harmful, wasteful, and generally inefficient process.

Therefore, it's evident the goal of both plant-based companies is to steal market share from the animal protein giants, not each other. "We don't accomplish anything from an environmental standpoint by stealing customers from Beyond Meat," Pat Brown said.

Beyond Meat and Impossible Foods are attempting to steal market share from agricultural companies like Tyson, but they're going about it in slightly different ways. For example, Impossible Foods uses heme in its products, which gives them a more "meaty" component. But to have enough heme, it has to manufacture it in the lab. Therefore, it uses genetically modified ingredients. By contrast, Beyond Meat won't.

Impossible Foods' scientific approach attempts to make its products as much like animal proteins as possible. Pat Brown recently said, "We're doubling the size of our R&D operation and ... launching a call for the world's best scientists and engineers to join us on the most important scientific and engineering project in human history." His company is looking to start producing fish and dairy alternatives in addition to the faux beef it already makes. These will likely be very convincing alternatives, but will use modified ingredients.

Beyond Meat employs scientists as well, but the manufacturing process is different. The company's scientists are concerned with its products having a nutritional profile similar to animal meat and improving the taste and texture on an ongoing basis. But it doesn't use GMOs to do it.

Perhaps you could say Impossible Foods is focused on providing superior taste while Beyond Meat wants to make sure it's delivering a better-for-you product. That's not to say Impossible Foods is bad for you or Beyond Meat doesn't taste good. I simply mean the primary factors considered when appealing to carnivores are different. As such, one would expect the two companies are attracting slightly different consumers. Indeed, Pat Brown says, "Keep your customers, Beyond Meat, please." 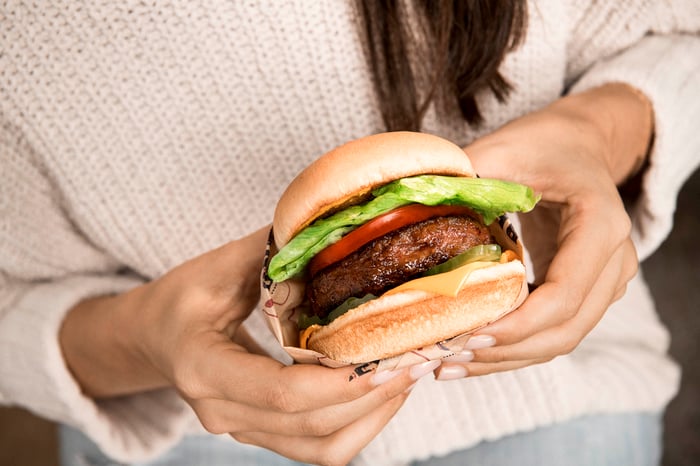 Finally, because Pat Brown and Ethan Brown are motivated by a higher purpose than just money, these companies are incredibly difficult to dismiss outright. Both Browns believe there are dire consequences for not developing plant-based meats to reverse climate change. Whether you believe that or not is a separate issue. These growth companies could reward shareholders big-time simply because of the fervency with which they're pursuing change.