CVS Health (NYSE:CVS) is one of the nation's largest pharmacy chains, and its stock is trading at a rock-bottom valuation. In fact, you could now buy the company's stock at a meager 11 times price to earnings, which is a steep discount over the market's 37 times net-income valuation. What gives?

As it turns out, the pharmacy giant is cheap for a good reason. Its entire business is ripe for disruption by healthcare start-ups or new ventures by e-commerce giants. Even its dividend yield of 3% isn't convincing enough to overshadow the long-term risks inherent with an investment. Let's find out why CVS stock's outlook is no longer as bright as it once was. 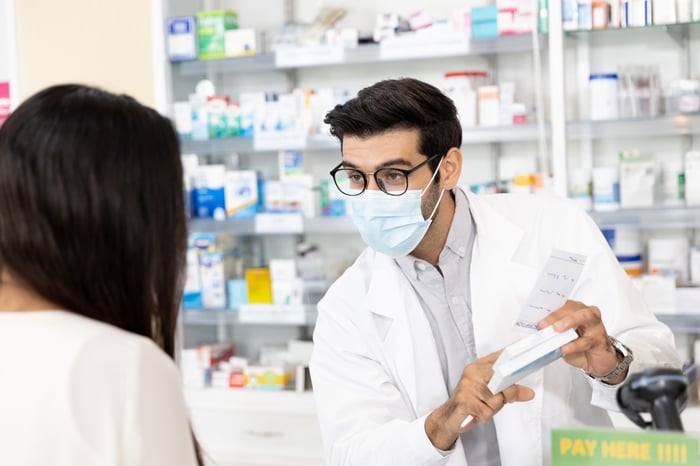 CVS had a decent third quarter. During this time, the company increased its revenue by 3.5% year over year, primarily due to increased sign-ups for its health insurance plans. Year to date, CVS has brought in over $12.3 billion in cash from its operations, representing a 20% increase over the first nine months of 2019.

The COVID-19 pandemic also created several revenue opportunities for CVS. So far, the company has administered over 6 million COVID-19 tests, representing 70% of all test volume at retail locations. Additionally, the number of seasonal flu vaccines administered at CVS is up a staggering 78% year over year to 13 million.

A major upcoming catalyst is the administration of COVID-19 vaccines at CVS locations, once one or more candidates are approved. The Trump administration's Operation Warp Speed (OWS) initiative promises to produce and deliver 300 million doses of COVID-19 vaccines before January of next year. But this is where the string of good news ends for CVS, as a significant risk now lies ahead.

On Nov. 17, Amazon (NASDAQ:AMZN) announced that it would be moving into the pharmaceutical business. Through Amazon Pharmacy, doctors will be able to send their prescriptions directly to Amazon for fulfillment, which would then deliver the drugs right to patients' doorstep within two days, at no charge. The service is available to all Amazon Prime members. There are also no limits to the number of free deliveries each month.

More importantly, patients can save up to 80% off generic drugs and 40% on brand name medications if they do not have insurance. The discount applies to online orders as well as at over 50,000 participating pharmacies across the country. If the savings are significant, then it may incentivize patients to opt out of private-prescription drug plans.

The problem is that Amazon has a solid track record of rendering brick-and-mortar retailers obsolete. One could reasonably predict that it will do the same for brick-and-mortar pharmacies with its new healthcare initiative. Due to its redirection of fulfillment and pledge of lower prices, Amazon poses a significant threat to retail pharmacies across the country.

In addition, it is simply much more cost-effective to operate a handful of fulfillment centers for filling prescriptions than opening thousands of retail locations. Last year, CVS operated 9,941 stores at the cost of $20.522 billion each year in lease liabilities alone. That's more than three times the size of its 2019 net income of $6.634 billion.

Its profits were tiny compared to its revenue of $256.8 billion last year. If customers were to, en masse, ditch CVS's health plans for potentially cheaper drugs or no longer go to one of their stores, then it would deal a devastating blow to the company's razor-thin margins.

In terms of capital, CVS is pretty tied-up. With the $5.08 generated in earnings per share (EPS) last year, CVS paid $2 per share in dividends. Since many investors are holding the stock purely for the sake of dividend payments, the company can't really eliminate its payouts or put its cash to more competitive use. The company is also very severely leveraged; its debt stack stands at more than twice the amount of its $32 billion in cash and all types of investments.

With over 23.3 million members in its health insurance plan, as well as filling 368.4 million prescriptions per quarter, CVS's core businesses are incredibly susceptible to Amazon's disruptions. Unfortunately, maxing out its expansion potential in the U.S. market has also caused its revenue growth to stall for some time. In fact, CVS stock is down by over 28% over the past five years. This is an abysmal performance, considering the S&P 500 is up over 75% during the same period.

Right now, CVS just doesn't have the margins or the liquidity to compete with tech giants entering the field. Furthermore, it pays a significant portion of its net income in dividends, tying up its cash flow, which could be used to expand the business. Due to all of the reasons above, I think that healthcare investors will be better off avoiding CVS stock.