Please ensure Javascript is enabled for purposes of website accessibility
Free Article Join Over 1 Million Premium Members And Get More In-Depth Stock Guidance and Research
By Will Healy - Dec 3, 2020 at 7:00AM

Should investors buy after the release of Apple's first 5G iPhone?

As Apple ( AAPL 2.02% ) begins sales of 5G devices and ramps up for the holiday season, investors have good reason for optimism. Amid the shifts in workloads brought about by COVID-19, demand for Apple devices has increased on many fronts.

However, the stock has also risen significantly this year, and its earnings multiple has surged to multi-year highs. Such activity could force investors to question whether they should continue to add positions in the tech giant or take some cash off the table.

The struggles of owning Apple

Admittedly, growth investors have good reason to sour on Apple stock at first glance. For one, its mammoth $2 trillion market cap is a limitation in itself.

This means that to achieve double returns, the market cap will have to rise to at least $4 trillion. Logically, growth investors might prefer to buy a mid-cap growth stock that would only need to add $5 billion or $10 billion in market cap to double their investment. 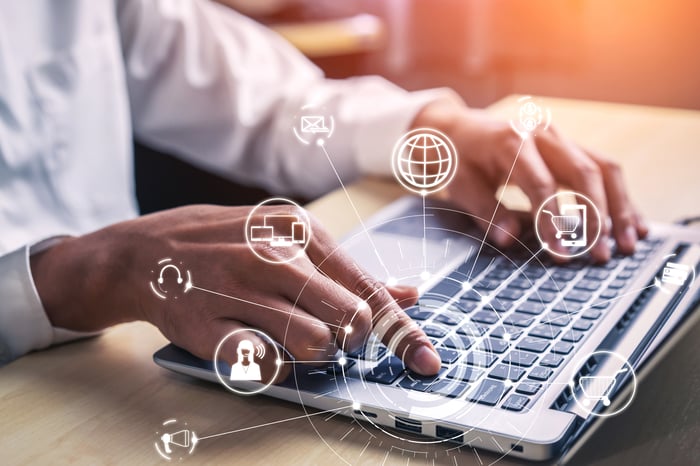 Today's Apple also does not look like a "growth stock." For one, it has become the largest holding of Warren Buffett's Berkshire Hathaway. Although Buffett has turned over more investment decisions to others in his company, such a position arguably points to an endorsement as a value stock.

Second, the dividend probably serves as more of a motivator for longtime shareholders than new investors. Though it has risen annually since payouts resumed in 2012, the $0.82 per share annual payout yields only 0.7%, well below the S&P 500 average of around 1.6%.

Additionally, new investors will have to pay more than 29 times forward earnings for this revenue stream. This multiple has risen dramatically in the last two years, well above the average forward price-to-earnings (P/E) ratio of just under 17. The 55% increase in Apple stock likely explains a significant part of the higher valuation. 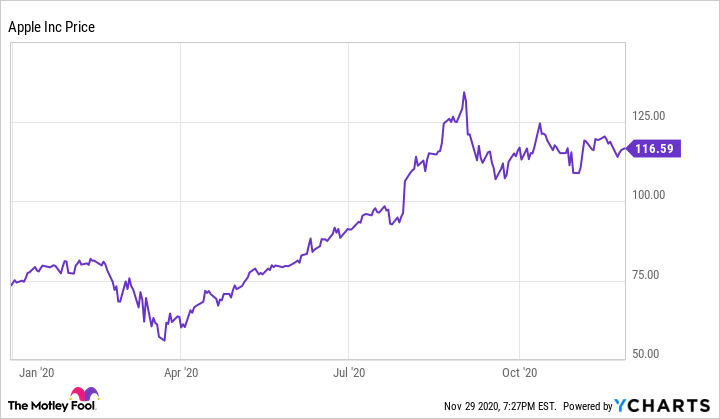 Still, Apple prospers amid the challenges

Nonetheless, the forward multiple is not necessarily a reason to sell. The 29 forward valuation is low when measured against the so-called "FAANG" stocks. Compared with Facebook, Amazon, Netflix, and Alphabet, only Facebook sells for a lower forward P/E ratio.

Moreover, despite some challenges, the last report gave stockholders reason to stay bullish. The most recent quarter brought record revenue of about $64.7 billion, as well as record sales for Macs and services. Revenues in numerous countries ranging from Brazil to Germany to India also surged to all-time highs.

The one negative is that iPhone sales fell by nearly 21%. This made up about 41% of Apple's overall revenue, down from about 50% over the previous nine months.However, that came right before a release of the new iPhone, which the company announced in mid-October.

The new iPhone 12 is Apple's first 5G iPhone, and in many respects, it begins the 5G upgrade cycle in earnest. CEO Tim Cook mentioned that iPhone 12 sales were off to a "great start."

Investors will probably have to wait for the next quarterly report to see the results. Nonetheless, the move to 5G will likely spur further iPhone purchases, particularly in China. It could also mean that the smartphone will again account for the majority of Apple's revenue.

Amid sales of the iPhone and other products, Apple remains a long-term buy. However, new investors may want to wait for the valuation to fall further before adding positions.

For next year, analysts forecast revenue growth will decelerate to 5%, while profits increases could slow to 9% if the predictions prove correct. This comes at a time when the multiple has reached a multi-year high and could point to multiple compressions in the near future.

Apple stock will probably recover eventually. Nonetheless, regardless of whether one is an owner or prospective buyer of Apple stock, waiting seems like the prudent course of action at this time.