China was a soft spot in Apple's (NASDAQ:AAPL) fiscal fourth-quarter earnings release last month: The company posted a 29% drop in sales in its Greater China segment. Apple's iPhone launch timeline was pushed back this year due supply chain complications related to the COVID-19 pandemic, and that weighed on results. CEO Tim Cook said, "Greater China is the region that was most heavily impacted by the absence of the new iPhones during the September quarter."

Now that all iPhone 12 models have been released, can the Mac maker stage a rebound? 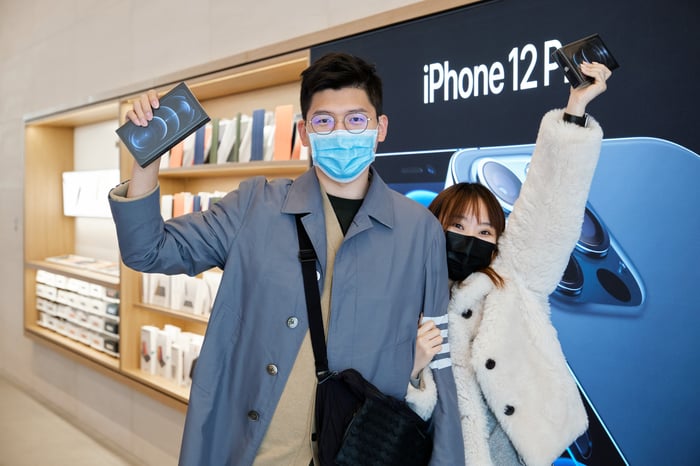 One analyst thinks so

Evercore ISI believes that Apple will now be able to return to growth in the Middle Kingdom, which is the largest smartphone market in the world. The iPhone 12 and 12 Pro launched at the end of October, with the iPhone 12 Mini and 12 Pro Max becoming available last Friday. Chinese consumers have long had a strong preference for large phones, and the iPhone 12 Pro Max is the biggest smartphone that the Cupertino tech giant has made to date.

Analyst Amit Daryanani notes that the broader smartphone market in China was weak in October as consumers anxiously awaited the new handsets. Total unit volumes sank by 28% to 25 million during the month, according to government data. However, international brands saw units climb by a modest 7%, with Apple representing 90% of those volumes, according to Daryanani.

The analyst is optimistic that iPhone launches will spur strong growth in November and that Apple will be able to sustain some momentum heading into the final stretch of 2020.

Bouncing back in China

Apple's financial performance in Greater China last quarter was the worst in several years, with revenue of $7.9 billion. That was better than the company's internal expectations, Cook noted, while highlighting that revenue excluding the iPhone increased by "strong double digits." iPhone demand was also trending higher through mid-September, potentially culminating in pent-up demand once the new models were unveiled. 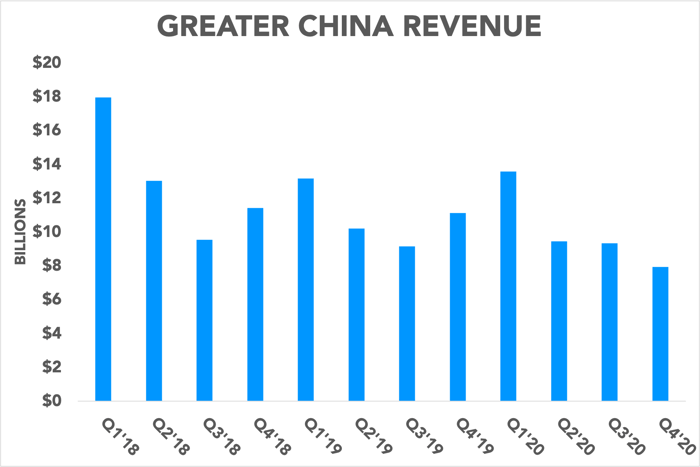 It's also worth noting that the ecosystem around 5G technology -- including cellular networks, 5G-equipped smartphone prices, and overall coverage -- is far more mature and developed in China than in the U.S. Chinese wireless carriers have been aggressively deploying 5G base stations at a faster rate than their U.S. counterparts, making the upgrade to 5G much more compelling to the average consumer in China.

China has also done a good job of containing the coronavirus with extreme lockdown measures and other restrictions, which has allowed the economy to rebound. China's GDP grew by 4.9% in the third quarter, although consumer spending is recovering relatively more slowly. Still, macroeconomic conditions are improving, which may help pave the way for Apple to make a comeback.