Some of the hottest stocks in the market these days aren't cloud stocks, artificial intelligence stocks, or even 5G stocks. Rather, beaten-down travel and other "recovery"-themed stocks have been the ones rocketing in recent weeks.

One of those recent winners has been Royal Caribbean Cruises (NYSE:RCL), which has surged more than 300% off its March lows. Still, Royal Caribbean, which had the best-in-class margins of any cruise line prior to the pandemic, is still trading almost 40% below its pre-COVID levels. Is the stock still worth buying, or has the market already priced in a full recovery? 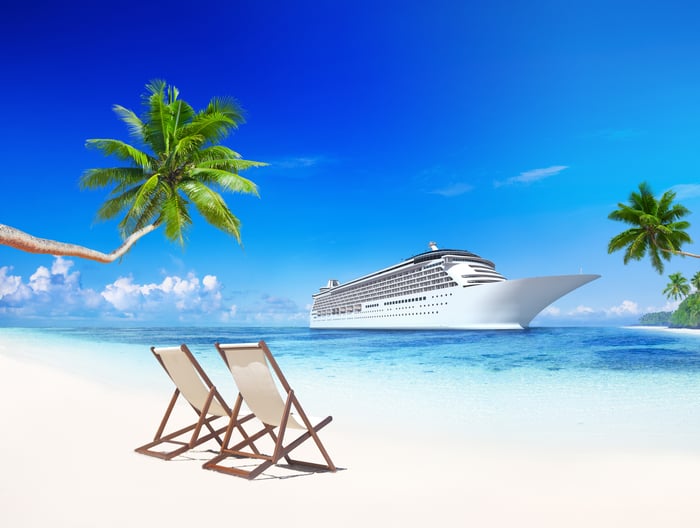 How to look at Royal Caribbean today

Investors should probably think about Royal Caribbean's value based on its getting back to pre-COVID levels of operating income in 2022, then factor in a higher debt load and share count. I've done this before with the company's larger and smaller rivals.

Cruising has been shut down since March, so cruise companies have had to issue billions in debt at high interest rates and issue equity shares at depressed prices just to stay afloat. Since the pandemic, Royal Caribbean has seen its debt surge from $11.2 billion to $19.2 billion and its weighted-average interest rate rise from 3.99% to 6% as of Sept. 30. In October, the company then issued another $575 million in convertible bonds and raised another $575 million via an equity raise.

Back in 2019, Royal Caribbean made about $2.33 billion in operating income, inclusive of profits from a subsidiary. With its current interest burden, the company's baseline net income should therefore be around $1.22 billion. Since Royal Caribbean isn't technically a U.S. company but rather a company of the Republic of Liberia, it pays virtually nothing in taxes. When you divide by the updated share count, Royal Caribbean should therefore earn about $4.93 or so in earnings per share (EPS). That's down from $8.95 last year, showing the severe effects of its higher debt and equity dilution.

Prior to the crisis, Royal Caribbean's price-to-earnings (P/E) ratio hovered in the mid-to-low teens. If you assume a 14 P/E ratio for Royal Caribbean -- which may be generous, given its highly indebted status -- the company could be worth around $70 per share once things get back to "normal."

Pricing in a recovery already

Given that Royal Caribbean is trading back around $84 per share, it appears that the market is already pricing in not only a full recovery, but an even better growth trajectory coming out of the crisis. Apparently, investors are now contemplating explosive pent-up demand for travel and other experience-oriented consumer-discretionary services once a vaccine is widely distributed. They might be right, of course, but at these prices, you're already paying for that rosy scenario.