Please ensure Javascript is enabled for purposes of website accessibility
Free Article Join Over 1 Million Premium Members And Get More In-Depth Stock Guidance and Research
By Alex Carchidi - Dec 6, 2020 at 8:52AM

It's easy to see why these two companies are winners.

Getting started with investing is intimidating for many people. Indeed, beginning investors often face a wall of indecipherable financial lingo in addition to the risk of losing their hard-earned cash on a bad stock. What's more, if you try to learn by cracking open a book on the subject, you're liable to find that many of the examples are out of date or seemingly inapplicable to the current state of the world.

The best trick for new investors is to invest in stocks that you understand. If you can't summarize how a company makes money in one sentence, steer clear. The second trick is to pick companies that have a highly repeatable business model that doesn't require taking the risk of innovation. Let's take a look at two great stocks that illustrate these principles and that you could also feel good about purchasing right now. 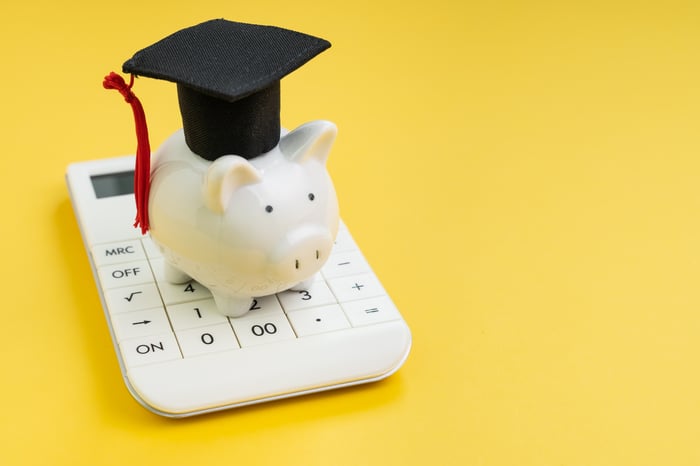 If you're a fan of great deals, you're probably already acquainted with Costco Wholesale ( COST 0.65% ). The company sells groceries and other staple goods in bulk to its customers, who pay a yearly membership fee of around $60 to shop there. Its warehouses don't carry that many different brands of each type of product. However, its prices are tough to beat, even for pricier stuff like electronics or appliances.

Costco has turned a profit this way for decades on end, despite its thin gross margin of 11.2%. It can sell stuff cheaply to consumers because it has tremendous sales volumes, thanks in part to its strong customer-first brand. Furthermore, it doesn't need to spend money on research and development (R&D) to grow. Nor does it need to spend much on marketing to keep its inventory turning. In the last 10 years, it has expanded its quarterly revenue without fail, frequently at a rate exceeding 10%. There isn't any sign that things are slowing down, nor is there any new category of expenses that might start to eat away at earnings.

In short, Costco is a great stock for new investors. It's easy to understand, and it doesn't need to do anything fancy to keep growing. And while it's not a flashy stock, Costco shares have gained 27% year to date. As a bonus, it also has a small and reliable dividend, which is definitely part of the fun factor when you're just getting started with investing.

Alibaba ( BABA -8.23% ) sells bulk goods from Chinese manufacturers to customers around the world. But unlike Costco, its emphasis is on e-commerce rather than retail locations. Plus, bulk sales are only one part of its business, which also includes a cloud computing division and a digital entertainment media division.

Its core e-commerce outlets represent the vast majority of its revenue, so Alibaba's business model is quite repeatable, even though it dabbles in innovation-intensive markets. In the past five years, revenue has grown by more than 30% in nearly every quarter, and Alibaba's net margin is nearly always above 20%. As e-commerce continues to devour brick-and-mortar retail across the world, you can bet that Alibaba will benefit. 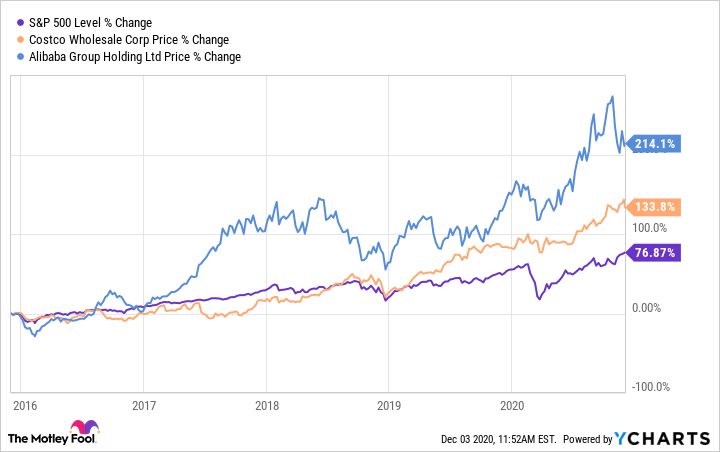 Costco and Alibaba stock price performance vs. the S&P 500, data by YCharts.

Alibaba is worthwhile for beginners because it's still in the midst of its growth journey. Given how quickly it's expanding, new investors won't struggle as much with holding on for the long term. If you bought Alibaba stock five years ago, you'd be up more than 200% -- and no matter how experienced you are, that's a great return.