Shares of Ubiquiti (NYSE:UI) rose 33.7% in the month of November, according to data from S&P Global Market Intelligence. The disruptive networking equipment maker's stock had already been fairly strong coming into the month, with 11.4% gains in October, making the November surge all the more impressive.

That could have something to do with the unprecedented growth surge Ubiquiti posted in its third-quarter earnings report. 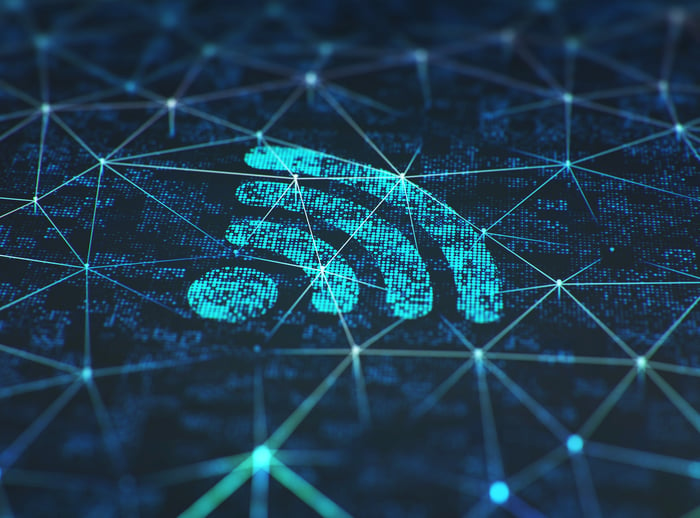 Ubiquiti is nearly 90% owned by its founder and CEO Robert Pera, so it only releases the bare minimum of information to the public, and no longer does earnings conference calls.

Still, those of us holding the remaining 10% of shares, and who have faith in management's big-time skin in the game, have nothing to complain about. Last quarter, Ubiquiti not only reported analyst-destroying revenue growth of 46.5%, its revenue growth reaccelerated to its highest rate since 2014, when the company's revenue was less than a third of what it is today. Earnings per share, benefiting from Ubiquiti's lean cost structure and prior-year share repurchases, rocketed 72% higher. 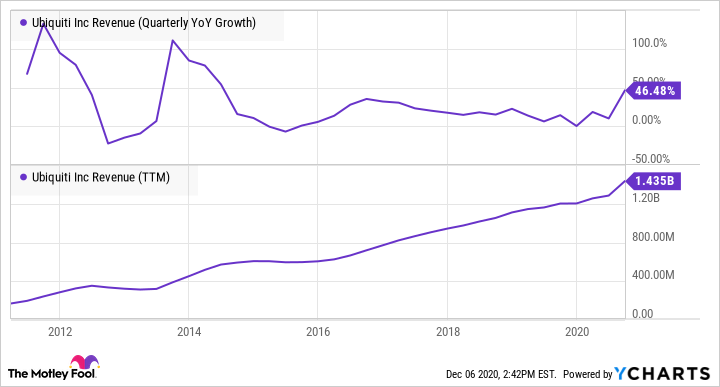 As a company grows larger, it's usually harder to grow at the same rate it did when it is smaller, so the new revenue acceleration was a huge surprise. Since Ubiquiti plays things close to the vest, investors can only guess what may be the cause of its massive reacceleration.

The prior quarter's enterprise sales, which is Ubiquiti's largest segment, was actually somewhat soft in June, likely due to supply chain constraints from to the pandemic. So, there could have been some catch-up there. However, even the smaller and older service provider segment, which provides aerial broadband radios that broadcast over airwaves rather than through wired connections, saw a surge to all-time high revenue numbers the company hasn't seen in years. This likely wasn't merely due to a catch-up, as the prior June quarter was also fairly strong for the service provider segment.

The need for reliable broadband connections in rural areas and developing countries could be a reason for that surge. Additionally, Ubiquiti has refreshed its service provider equipment in recent years, with the official release of its new LTU radio a couple of years ago. It's possible the COVID-19 pandemic is sparking an upgrade cycle among service providers using Ubiquiti's equipment.

Ubiquiti is now near all-time highs and trades at a whopping 37.6 times earnings, as investors seem to be thinking the current growth acceleration is the real deal and not a one-off. Still, long-term investors have been rewarded by hanging on to the secretive Ubiquiti through ups and downs. Every time Ubiquiti has a material pullback, management usually steps in with share repurchases, putting somewhat of a floor under the price. And since Pera owns so much of the stock right now, a take-private buyout could be in the cards.