Please ensure Javascript is enabled for purposes of website accessibility
Free Article Join Over 1 Million Premium Members And Get More In-Depth Stock Guidance and Research
By Keith Speights - Dec 10, 2020 at 6:14AM

Billions of dollars could soon pour into the biotech's coffers.

The countdown is on. One week from today, an FDA advisory committee will review Moderna's ( MRNA 6.42% ) emergency use authorization (EUA) filing for COVID-19 vaccine candidate mRNA-1273. The FDA will then make a final EUA decision soon thereafter, taking the advisory committee's recommendation into consideration.

While anything can happen, it seems highly likely that mRNA-1273 will receive a green light from the FDA. That will pave the way for big bucks to begin flowing into Moderna's coffers. But just how much money will Moderna actually make from its COVID vaccine? 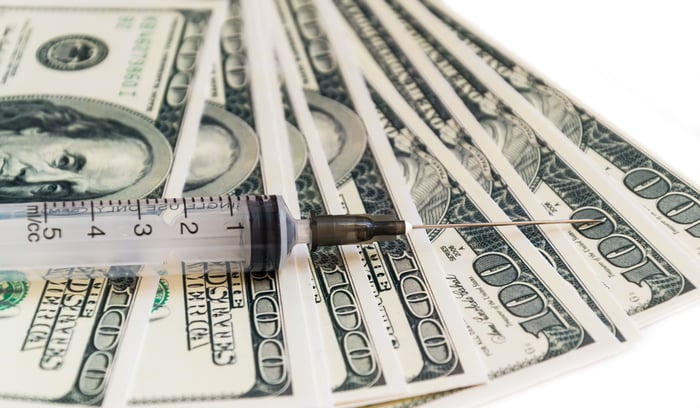 Bernstein analyst Ronny Gal recently stated that he expects the COVID-19 vaccine market will approach $40 billion in 2021. After that, he looks for the market to stabilize at roughly $6 billion per year.

Gal expects that Pfizer and BioNTech will generate the highest revenue with their messenger RNA (mRNA) vaccine BNT162b2. However, he views Moderna as a close No. 2 in the coronavirus vaccine market.

Will Ronny Gal's projection turn out to be right? Maybe. Wall Street analysts get paid to slice and dice all the available data to churn out solid estimates. There's no doubt that the $20 billion figure for Moderna reflects a lot of thought and careful analysis.

However, it's important to understand that any analyst's project makes plenty of assumptions. In this case, for example, Gal assumes that Moderna will be able to produce 750 million doses of mRNA-1273 next year. Moderna has publicly stated that it expects to be able to make 500 million doses and up to 1 billion doses in 2021.

Gal also included an even more critical assumption in his projection. He predicts that booster vaccine shots will only be needed every three years. At this point, though, no one knows for sure how frequently booster shots will be required for COVID-19.

The reality is that there's a wide range of possibilities as to how much money Moderna might generate from mRNA-1273. If COVID vaccine booster shots are required annually rather than every three years, it would make a huge difference.

Let's suppose that annual boosters are needed. Also, assume that Moderna can make 750 million doses per year and sells all of them at the low end of its previously stated price range ($32 per dose). The company could make $24 billion each year in this scenario -- a lot more than Ronny Gal projects Moderna will make over the next five years.

Of course, there are other variables that could cause Moderna's take to be much lower. For example, if a single-dose vaccine with a high efficacy rate is launched, it could capture much of the market share from mRNA-1273. It's even possible (although I suspect unlikely) that Gal's three-year timeframe required for booster shots is overly pessimistic and that vaccines provide immunity for even longer periods.

The late U.S. Senator Everett Dirksen is attributed with saying, "A billion here, a billion there, and pretty soon you're talking real money." Regardless of exactly how much money Moderna makes from mRNA-1273, we'll likely soon be talking about real money for the company.

Probably the most important consequence of the potential cash influx that's on the way for Moderna is that it will be able to invest in its pipeline. Moderna's executives have thought for a long time that if its mRNA technology works with one disease, it will work with lots of diseases.

Moderna's pipeline currently features 12 other mRNA therapeutic and vaccine candidates in clinical testing. With the billions of dollars it could soon receive, the company plans to expand its development to include up to 50 clinical-stage programs.

Over the long run, it matters more what Moderna does with its cash than the specific amount that it makes. The good news for investors is the tremendous gains for the biotech stock could be just the beginning of a multi-year and even multi-decade climb if Moderna's mRNA approach works with other diseases as well as it appears to work with COVID-19.