Please ensure Javascript is enabled for purposes of website accessibility
Free Article Join Over 1 Million Premium Members And Get More In-Depth Stock Guidance and Research
By Keith Speights - Dec 15, 2020 at 6:08AM

And the goodies should keep on coming.

Christmas hasn't arrived yet, even though the Hallmark Channel has been airing Christmas movies since October. You still have a little over a week to finish your shopping.

Some investors have already received a nice present, though. One of the strongest Dividend Aristocrats on the market recently gave shareholders a great early Christmas gift. Abbott Laboratories ( ABT 1.47% ) announced a dividend increase on Dec. 11. There's a lot about this dividend hike for investors to like. 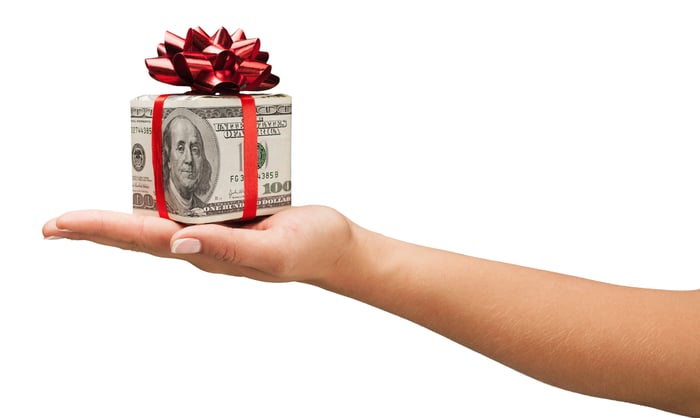 Abbott is boosting its dividend payout by a whopping 25%. The healthcare giant's board of directors approved an increase of its quarterly dividend to $0.45. Based on Abbott's current share price, the move will increase its dividend yield to nearly 1.7%. It's the largest dividend increase for the company since 2013, when Abbott raised its dividend by the same percentage.

What's the third impressive number? 388. It reflects the number of consecutive quarters that Abbott has paid a dividend. The tremendous run began way back in 1924 as Calvin Coolidge was wrapping up his first term as U.S. president.

No company can pay a dividend for 388 quarters in a row and raise its dividend for 49 years in a row without doing an awful lot right. Arguably the biggest key to Abbott's long-term success is the company's ability to innovate and adapt to changes in the healthcare landscape.

It's not surprising in the least that Fast Company magazine named Abbott the "World Changing Company of the Year" for 2020. However, such accolades aren't the best proof of Abbott's innovation. The most compelling evidence is found in the company's market position: Abbott ranks first in practically all of its businesses.

Abbott's lineup includes a wide array of top-selling products and services. Two of them, though, especially stand out as factors behind the company's ability to provide shareholders such a big dividend increase this time around.

The company's FreeStyle Libre continuous glucose monitoring (CGM) system has become an enormous commercial success. Abbott won U.S. Food and Drug Administration (FDA) clearance in June 2020 for its FreeStyle Libre 2 integrated CGM. In September, it picked up a CE mark in Europe for the third version of the device, which offers the smallest glucose sensor of any CGM.

Abbott also quickly emerged as the leader in COVID-19 testing this year. The company now markets seven COVID-19 tests under the FDA's emergency use authorization program. The U.S. government purchased 150 million of Abbott's BinaxNOW COVID-19 Ag Card tests, which can deliver results in only 15 minutes.

An even better present

My view is that Abbott Labs is a screaming buy right now. Investors who scoop up shares by the market close on Jan. 15, 2021, will be eligible to receive the company's bigger dividend to be paid out on Feb. 16. The more important reason why I like Abbott, though, is its growth prospects.

The consensus among Wall Street analysts is that Abbott will be able to deliver average annual earnings growth of more than 13% over the next few years. I think the company will be able to achieve that level of growth with its strong product lineup and investments in research and development. With its ever-increasing dividend, that kind of growth should enable Abbott to generate market-beating total returns.