Amazon (NASDAQ:AMZN) and Nike (NYSE:NKE) have both benefited from shifts in consumer behavior this year.

With many brick-and-mortar stores closed and social distancing a necessity, people increasingly turned to online shopping, which gave the e-commerce leader a boost. Meanwhile, as tens of millions of people shifted to working remotely, and countless folks started spending more time on individual outdoor sports, Nike's sales of athletic gear and clothing grew, and no less aided by a robust digital sales channel.

Both companies' prospects look good as people continue to social distance and shop online due to fears of contracting COVID-19. However, the roll-out of effective vaccines for the virus could lead to a return to more in-store shopping and renewed spending on entertainment and travel. So in light of that outlook, which of these consumer discretionary companies is the better buy right now? 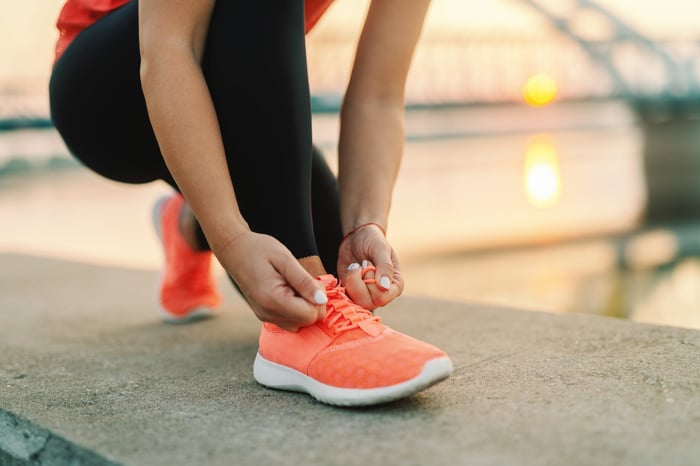 The e-commerce giant's revenue growth has been impressive this year -- up 37% in the third quarter after increases of 40% in the second and 26% in the first.

Recent reports indicate its strength has continued into the holiday season. According to data company Numerator, Amazon outperformed during the Thanksgiving to Cyber Monday period this year, receiving nearly $1 out of every $5 spent. Gen Xers and baby boomers in particular favored Amazon, according to the Numerator data.

This year's Black Friday and Cyber Monday were also the "best ever for independent businesses selling on Amazon -- nearly all of which are small and medium-sized businesses -- with worldwide sales growing over 60% year-over-year," the company noted in a press release.

While the end of the pandemic is likely to lead to a revival for in-store shopping, Amazon has ways to keep up its impressive growth, and among its strongest tools will be its Prime program. CFO Brian Olsavsky said of Prime on the third-quarter earnings call: "The renewal rates are going up, and the engagement is going up. And so people are buying more frequently and across more categories, they're using more of our digital benefits." The company is also investing in top-tier content for its global Prime member base, which it sees as a nice acquisition channel for new Prime members.

Another segment driving Amazon's growth and profitability is Amazon Web Services (AWS). The segment's revenue increased 29% year over year during the third quarter , and Amazon sees the strength continuing as more companies look to AWS to help cut costs. CFO Brian Olsavsky commented on the third quarter earnings call: "We've seen a lot of companies extending their contracts with us. The backlog of multiyear deals has gone up quite a bit. So it's good from a customer connectiveness standpoint."

Nike, the athletic gear and equipment behemoth, has also benefited as people embraced athleisure wear and sports equipment, spurred both by their shifts to remote-worker status and a greater interest in fitness and wellness. However, Nike's business was negatively impacted by store closures and the disruptions of sporting events.

In Nike's fiscal first quarter, which ended Aug. 31, revenue declined 1%, following a fourth-quarter revenue decrease of 36% and a third-quarter increase of 5%. The company pointed to owned and partner store closures for the sharp drop in sales during its fiscal fourth quarter, which covered March, April, and May: 90% of Nike-owned stores were closed for about eight weeks during that quarter.

The sporting goods company is currently getting a boost from stores reopening, the strength of its digital channel, and new product launches. Nike continues to add new styles to its popular footwear brands Air Force 1, Air Jordan 1, and Air Max. In its fiscal first quarter, the company also launched its first maternity line and a new yoga collection. It also debuted a sustainable footwear platform called Space Hippie, which is appealing to younger Gen-Z consumers.

When COVID-19 is brought under control, people will undoubtedly return to live sports and group athletics. In-store shopping should also get a boost. All of these factors should help Nike's business.

While both Amazon and Nike are experiencing tailwinds and appear to be well-positioned for the long term, Amazon is outpacing Nike in terms of growth. While Nike's business should get a big boost when pre-pandemic normalcy returns, Amazon's impressive customer stickiness should drive continued growth irrespective of existing conditions. Despite the recent positive developments on the vaccine front, Amazon still appears to be the less risky choice since its business has not only shown resilience but also witnessed greater growth during the pandemic. It's still too early to predict when conditions will return to the pre-pandemic normal, which means I'll place my bet on Amazon.