Please ensure Javascript is enabled for purposes of website accessibility
Free Article Join Over 1 Million Premium Members And Get More In-Depth Stock Guidance and Research
By Billy Duberstein - Dec 21, 2020 at 8:27AM

What a year it's been for electric vehicle investors. EV leader and first mover Tesla ( TSLA 5.09% ) saw its stock soar during 2020. Unsurprisingly, 2020 then saw more young EV wannabes swept up in the positive momentum, with many upstarts rushing to go public in a flurry of IPOs and SPACs to raise money from an eager public.

Yet while some of these EV stocks could work out in the long run, many have gotten way ahead of themselves. Several now sport market caps in the tens of billions, despite very little revenue to show thus far. 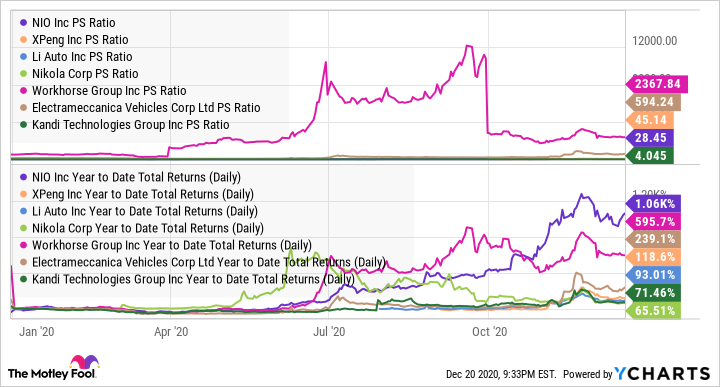 Not only are most of these stocks expensive, but Toyota ( TM -1.31% ) President Akio Toyoda  -- someone who knows a thing or two about the auto industry -- just threw a big pail of cold water on the EV hypergrowth story. 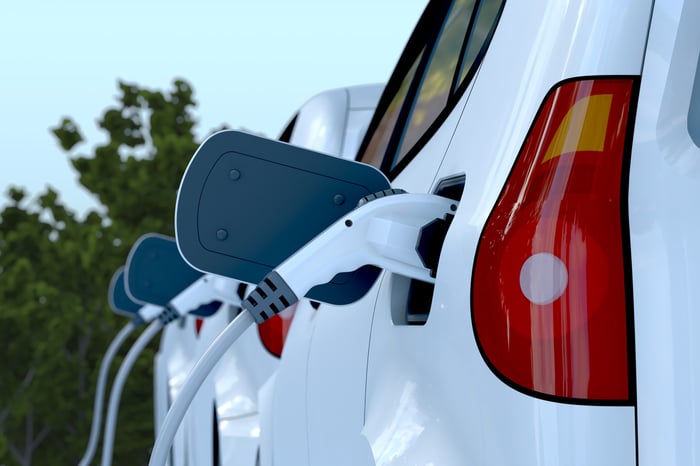 A "flower on a high summit"

Speaking recently at a year-end conference for the Japan Automobile Manufacturers Association, Toyoda voiced his skepticism of the sky-high expectations for a coming EV revolution.

There are two components to his complaints. The first is cost. Toyota is an affordable auto brand, and Toyoda believes the current cost of EVs is too high to achieve true mass-market potential. Even the lowest priced Tesla goes for more than $38,000 without subsidies, and usually much more for anything with decent features. Apparently, Toyoda believes that mandates for all-electric new vehicle sales by 2030 through 2040, such as the ones recently passed by California, Canada, the U.K., and Toyoda's home country of Japan, could force consumers to buy cars that are too expensive for their lifestyle, calling EVs "a flower on a high summit."

In order to get to $25,000, Tesla would have to be successful in lowering not only the cost of the battery, but other features as well. Today, battery packs cost $10,000 to $12,000, and the company is hoping to get that under $6,000 in time. Still, at best, that would only bring down the cost of Model 3s to the low $30,000, so more cost savings would have to come from other design features and technology breakthroughs.

Could Musk and company eventually get there? Never count Tesla out, just keep in mind that a $25,000 EV isn't a done deal; and even if it eventually comes to fruition, it could take much longer than Tesla promises.

"The more EVs we build, the worse carbon dioxide gets"

Toyoda's second point was that even if the world did go all-electric, the current electricity infrastructure is insufficient to meet that massive demand, as the vast majority of electricity today is still generated by fossil fuels such as coal and natural gas. Japan specifically has had to build out more fossil fuel generation after the Fukushima nuclear disaster of 2011. "When politicians are out there saying, 'Let's get rid of all cars using gasoline,' do they understand this?" Toyoda quipped.

While Toyoda has a point, it's also possible much of the developed world will aggressively build out renewable electricity capacity in tandem with the rollout of electric cars. It's also why Tesla is focused on both cars and solar as well as utility-scale battery storage.

Still, there is an awfully long way to go. Even with their impressive growth in recent years, in 2019, renewable sources, including all wind, solar, biomass, and hydropower, combined to only make up 17.6% of U.S. electricity generation. Looking only at wind and solar, that figure drops to just 8.8%. Meanwhile, fossil fuels still generated 62.6% of U.S. electricity, with nuclear generating 19.6%.

Considering that the U.S. is further along than many other developing nations on this front, the task of deploying enough renewable energy to meaningfully displace carbon-producing fossil fuels is truly monumental. Toyoda estimated that in Japan alone, the buildout would require between $135 billion and $358 billion in new infrastructure investment.

Invest in EVs with your eyes open

There's lots of excitement around EV stocks right now, and in part, that's justified. However, as these all-electric vehicle companies come to market, keep in mind that their path to growth could be bumpy indeed. And when growth stocks priced for perfection run into roadblocks, they could have big sell-offs.

At the same time, Toyoda may very well be talking his company's book, at least in part. Toyota is the current leader in hybrid vehicle technology, which is threatened by all-electric vehicles, and it's also pursuing hydrogen fuel cell technology. Of course, Toyota is not completely ignoring all-electric vehicles; the company has unveiled a low-volume all-electric model this year, with plans for two more in the future. Still, that's far below what some other rivals are doing, so Toyota seems to be building toward a more diverse future auto market than the many EV-only proselytizers would have you believe. Toyota is the current world leader in cars sold, so EV bulls should listen.

Keep your eyes on the road and drive carefully with these new-age EV stocks.