Shares of ExxonMobil (NYSE:XOM), ConocoPhillips (NYSE:COP), and Phillips 66 (NYSE:PSX) all were down 5% early Monday morning, before recovering.

Though the first shipments of the Moderna COVID-19 vaccine are being distributed today, the sector is taking a hit from other pandemic news, as well as another asset writedown in the sector.

As has been the case during much of the pandemic, stocks in industries most affected by lockdowns or reopenings are moving in tandem. And today's news of a new viral strain, and subsequent lockdown measures in the U.K., have investors spooked about a recovery in oil. 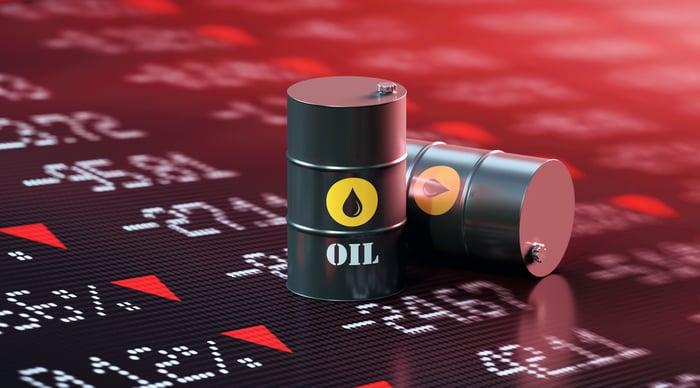 ExxonMobil also recently announced a record writedown of nearly $20 billion and capital spending cuts. It said it will prioritize and focus investments on "advantaged assets with the highest potential future value," in an announcement released Nov. 30.

The companies are reacting to a setback in a demand recovery for oil, due to the resurgence of COVID-19 cases in many places around the world. OPEC recently revised its demand estimates, lowering its forecast for next year. Phillips 66 put out a $1.7 billion 2021 capital spending budget last week. That is almost 50% lower than what it had set for its 2020 spending plans.

The recent resurgence in the pandemic is being exacerbated today by news of a new, more contagious strain in the U.K. New lockdown measures are being put in place, and other European countries are shutting down travel from the U.K. Mobility accounts for 57% of global oil demand, according to the International Energy Agency (IEA). ConocoPhillips is trying to take advantage of lower valuations in the sector, and announced it was acquiring oil and gas exploration and production company Concho Resources for about $10 billion in October.

Oil prices had been climbing recently, nearing $50 per barrel for the first time since February. But investors are putting the recovery on hold today with the realization that the end of the pandemic is still months away. Investors in the oil industry will have to be patient and expect some ups and downs before global economies bring demand levels back near pre-pandemic levels.