If you purchased just $10,000 in shares of vaccine drugmaker Novavax (NASDAQ:NVAX) at the beginning of the year, your investment would be worth a stunning $304,000 in less than 12 months. That kind of performance is wild, considering a $10,000 investment in its peers, Moderna and BioNTech, would be up only 617% and 208%, respectively.

Many investors are now skeptical of Novavax, as it can be very difficult to buy stocks after they breach new records. After all, shares are down over 30% from all-time highs after its progress fell behind its competitors.

However, ample signals are pointing to a sharp rebound in Novavax stock in the next year. Today, let's look at why the company's momentum is about to pick up exactly where it left off. 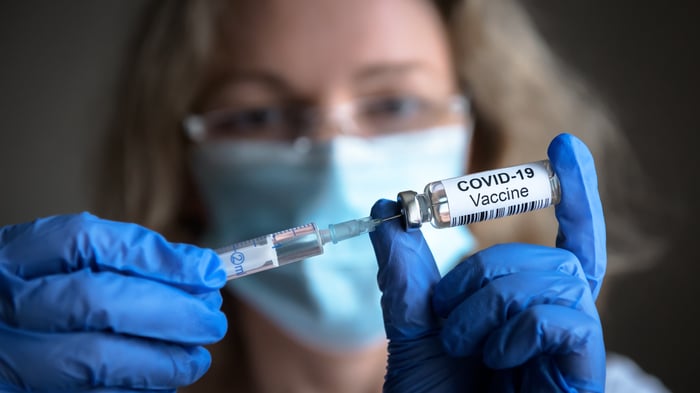 Novavax's protein subunit coronavirus vaccine NVX-CoV2373 is in the final stages of phase 3 clinical trials, with interim data expected by January or February of next year. Protein-based vaccines feature fragments of live proteins instead of messenger RNA strands that encode for it or injecting patients with a similar but harmless virus to induce immunity.

Like the coronavirus vaccines that made it to market, patients who took Novavax's experimental vaccine developed strong neutralizing antibodies and T-cell responses in phase 1 without experiencing serious adverse events. T-cells recognize virus-infected cells and tell those cells to self-destruct, preventing the virus from spreading throughout the body. They can form memories of pathogens for months or years. NVX-CoV2373 is also simple to transport from a logistical perspective, as it only requires refrigeration instead of freezing temperatures.

Since the pandemic began, Novavax has received over $2 billion in funding from government and private organizations to advance NVX-CoV2373 to commercialization. The company is also part of Operation Warp Speed, having received $1.6 billion from the initiative.

Business is about to take off

Even before the clinical data are out, there is a lot of faith placed in Novavax's vaccine candidate. As of this writing, the company has secured 286.7 million pre-orders of NVX-CoV2373 from the U.S., U.K., Canadian, New Zealander, and Australian governments. For a price of $16 per dose, that's potentially $4.6 billion of revenue in the bag for Novavax should its vaccine candidate make it to regulatory approval. If that's not enough, the company is also closing in on a deal with the E.U. to supply the supranational organization with 100 million doses of its experimental vaccine.

Novavax has plans to expand the number of orders and keep up with the demand. It signed agreements with various contract manufacturing organizations, such as the Serum Institute of India, the largest producer of vaccines globally. Through these deals, the company estimates it can deliver two billion doses of its experimental vaccine by the end of 2021.

Due to a high likelihood of clinical trial success and the ability to scale its production, Novavax is heavily undervalued compared to its potential. The company has a market cap of just $7.95 billion. Its enterprise value is even less, considering it has over $572 million in cash on its balance sheet.

Since the company just might see revenue of more than $10 billion next year, the mid-cap biotech is still relatively cheap. It's still not too late for investors who missed out on the monstrous rally in coronavirus vaccine drugmaker stocks this year to give Novavax a chance.