Please ensure Javascript is enabled for purposes of website accessibility
Free Article Join Over 1 Million Premium Members And Get More In-Depth Stock Guidance and Research
By Sushree Mohanty - Dec 29, 2020 at 7:40AM

Its better-than-expected third-quarter results give you all the reasons you need to buy this pot stock.

U.S. cannabis stocks often get overlooked in favor of popular Canadian players like Aurora Cannabis and Canopy Growth. But if you look at their revenue growth even in a limited legal market, you will understand why U.S. stocks are actually the better options. While marijuana is still illegal at a federal level in the U.S., more states made cannabis legal in the November 2020 elections, presenting more opportunities for expansion. Currently, 35 states and the District of Colombia allow the medical use of cannabis, while 15 states and D.C. allow recreational use of marijuana.

Massachusetts-based Curaleaf Holdings ( CURLF -0.67% ) had a marvelous 2020. It reported consistent revenue growth and positive EBITDA (which stands for earnings before income, tax, depreciation, and amortization). Its outstanding performance continued into the third quarter of fiscal 2020, which was reported on Nov. 17. Its stock has gained 97% so far this year, while the industry benchmark, the Horizons Marijuana Life Sciences ETF, is down 4% over the same period. Here are three reasons why this pot stock is an excellent buy after its Q3 results. 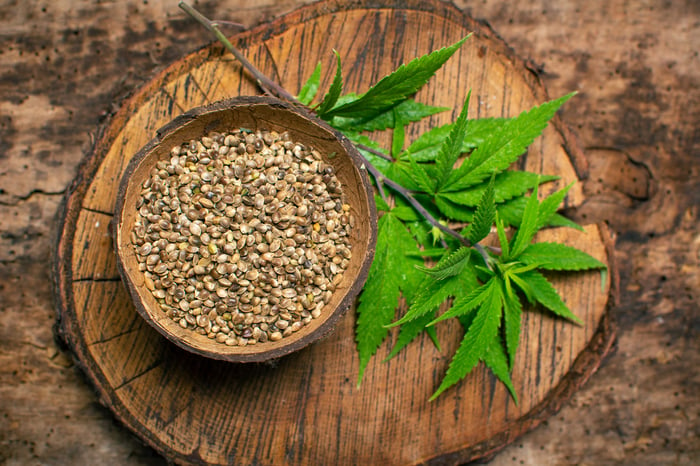 Despite the strong demand for cannabis, Canadian marijuana companies have always struggled to generate the revenue required to be profitable. It is mostly because of the challenging regulatory environment in Canada -- this delays the opening of legal stores, pushing consumers toward the black market.

Meanwhile, U.S. cannabis companies saw drastic revenue growth, especially when marijuana sales started soaring during the pandemic. Curaleaf is a vertically integrated cannabis company, which allows it to control its supply chain. It sells its medical and recreational marijuana products in 23 U.S. states. Because it controls all steps of production, Curaleaf could avoid major production disruption and maintain efficiencies amid the pandemic.

The excellent top-line increase in the quarter drove adjusted EBITDA to $42 million, up from an EBITDA of $10.4 million in Q3 2019. The company reported positive EBITDA in the first two quarters of fiscal 2020 as well. EBITDA also jumped 51% from $27 million in the second quarter, reflecting the rate at which the company grew its sales amid the crisis. If EBITDA grows at this rate, it won't be too far along when Curaleaf starts making profits.

Acquisitions have always been a driving factor for Curaleaf's revenue growth. The company stated in its Q3 results that the Grassroots, Curaleaf NJ, and Arrow acquisitions in 2020 drove the retail revenue jump.

The Grassroots acquisition, in particular, has proven very fruitful for Curaleaf. And why wouldn't it? With the acquisition of the hemp cannabidiol (CBD) oil company, Curaleaf now has 135 operating dispensaries with a stunning 1.6 million square feet of cultivation capacity. This will allow the company to meet growing national demand.

More growth prospects ahead in 2021

I find Curaleaf's bold strategy of expanding amid a global pandemic impressive. And I don't see any reason for it to stop. Its revenue growth is sky-high and its consistent positive EBITDA and stable balance sheet allow it to spread its roots in more legal markets. It ended the quarter with $84.6 million of cash on hand and $280 million of outstanding debt, net of unamortized debt discounts.

Management believes the election results showed the support the American people have toward cannabis. A Gallup poll prior to the election showed around 68% of Americans support cannabis legalization. The company discussed in the Q3 earnings call its plans to double its capacity in key states, including Arizona, Illinois, Massachusetts, Maryland, Florida, and Pennsylvania -- where it believes demand exceeds supply. Florida, New Jersey, Pennsylvania, and Arizona can also expect additional dispensaries to open.

Curaleaf expects to end fiscal 2020 on a high note, planning to bring in managed revenue of around $240 million and pro forma revenue of $250 million in the fourth quarter. Furthermore, management stated BDS Analytics estimates that Curaleaf could generate close to $30 billion in revenue by 2025. Note that this current estimate is based on its operations in 23 states. Imagine the growth when more states legalize marijuana, or if marijuana becomes federally legal by 2022. 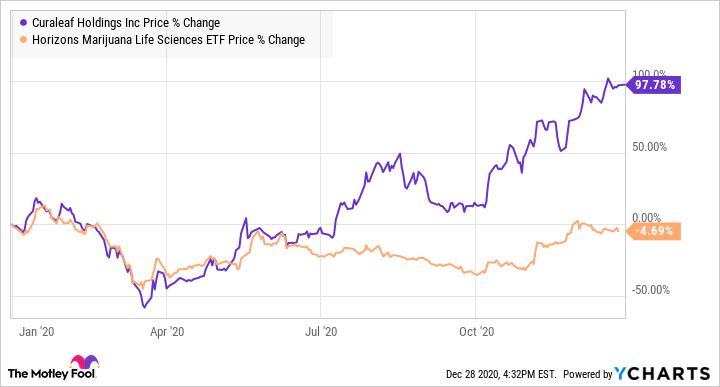 At the rate that Curaleaf is multiplying its revenue, the company could easily achieve consistent profitability. Increased sales will also help the company continue its expansion into new state markets. With solid financials and a stable position amid an ongoing crisis, this cannabis stock is as close as you can get to a sure thing.

Is Curaleaf in Trouble?

This Troubling News Could Send Pot Stocks Crashing This Week

2 Growth Stocks I'd Load Up On if the Market Crashes

Why Cannabis Stocks Could Take Off Soon