Social media has been one of the most disruptive forces in the world over the past decade, and billions of people are now engaged on social platforms. Facebook (which includes Facebook, WhatsApp, and Instagram), Alphabet's YouTube, Tiktok, and even Microsoft's LinkedIn are engaging billions of eyeballs every day and generating billions of dollars, which is why they're some of the biggest tech stocks on the market.

The forgotten social network has long been Snap Inc's (NYSE:SNAP) Snapchat. The company isn't as highly valued as the companies I listed above, and has fewer users. But it has a core user base that's the envy of the social networking industry, and technology that could change how we interact with each other and our devices. Other social networks are well established today, but it's Snapchat that could be the disruptive social network of the future, which is why it's my top stock to buy in January. 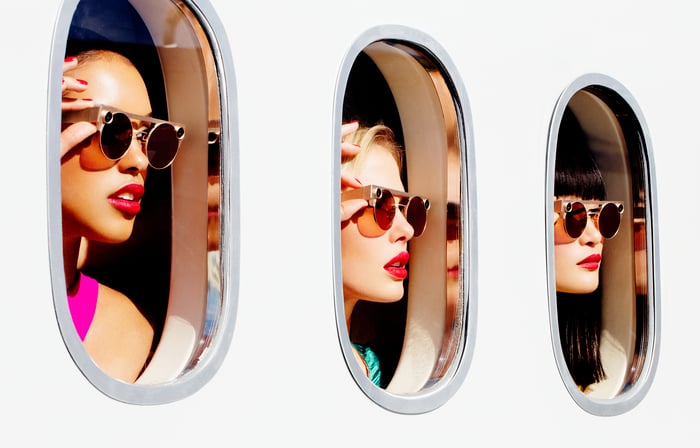 The social network of the future

Other networks may reach more people, but Snap's social network isn't small at 249 million daily active users, and it reaches a coveted youth demographic. In the U.S., the company reaches 90% of the 13-to-24-year-old demographic, and 75% of those age 13 to 34.

Long-term, this demographic is key to Snap's advertising business. Companies are typically willing to pay more to reach young consumers who can make lifelong customers. And young people are also early adopters of technology, so it's a great foundation to build on.

Snap's management leads nearly every investor presentation with a line like this: "Snap Inc. Is a Camera Company".

If you look at Snap's products, the positioning makes sense. The only hardware it makes is Spectacles, the glasses with two cameras for capturing the world as you see it. Within the Snapchat app, a very commonly used feature is face filters. These products may not seem like they're tied closely together, but they are -- they're both part of Snap's augmented reality (AR) technology strategy. And I think it's AR that defines the company's future.

Snap has already released an AR studio called Lens Studio that allows creators to use Spectacles to create custom images within Snapchat. But it's the company's Local Lenses, which allows users to view and interact with an AR overlay in a real-world location, that's really revolutionary. What's potentially game-changing is that this technology allows you to interact with an environment live, and share your interactions with others on Snapchat.

Snap is arguably the most advanced augmented reality company in the world today. When you think about how young people could leverage AR to interact with art and advertisements or what AR could look like on glasses in the future, Snap has a lot of optionality.

Snap might change a lot a year from now

Right now, Snap's AR products are contained within the Snapchat app on a smartphone. But that may not be the case forever.

Facebook has announced that it is developing AR glasses, and hopes to launch them as soon as this year. Apple has long been rumored to be working on AR glasses as well. Snap could have an app within those glasses, providing users the ability to view AR content through the app. This could open up user functionality and advertising content that has built-in AR based on your network and location.

Then there are Spectacles, which have been getting more advanced since they were first introduced. The latest spectacles capture two images to create a 3D image, but the future could be glasses with a camera and the ability to view live AR content. Given the developments in Lens Studio and Local Lenses, this could open up a world of possibilities for Snap.

If we view Snap as a camera (and AR) company, it opens up a lot of options long-term. Maybe the company simply advances its app and continues to generate more revenue per user while improving face filters. Or maybe the app and face filters are just the start of a much bigger vision to use AR as an everyday technology that's more accessible than even our smartphones, because it's integrated into glasses that are always on our face. The possibilities are both exciting and potentially disruptive.

One of the stronger narratives behind Snap's stock has long been that the company hasn't been able to turn its user base into revenue. But that's changing quickly. 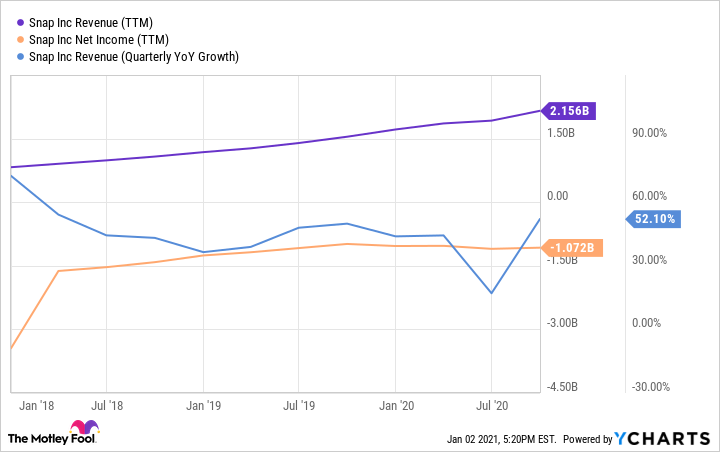 To be fair, Snap continues to lose money, and I don't see that changing soon given what it's investing in new technology today. But that cash burn hasn't seemed to matter, and with a market cap around $75 billion the company can always sell some stock to fund its growth initiatives.

Snap has a lot going for it, and I think it could be one of the most influential technology companies over the next decade as AR becomes more commonplace. It's starting with an incredible demographic of users, brings some of the best AR content to the table (with the potential to advance that dramatically as AR glasses are introduced), and has improving fundamentals from its core business. That's a lot to like, and gives the company multiple avenues for growth -- which is why this is my top stock to buy in January.