Shares of Apartment Investment and Management Co. (NYSE:AIV) sank 86% in December, according to data from YCharts. The stock plunged after the company officially separated its business and stock into two distinct units on Dec. 15. 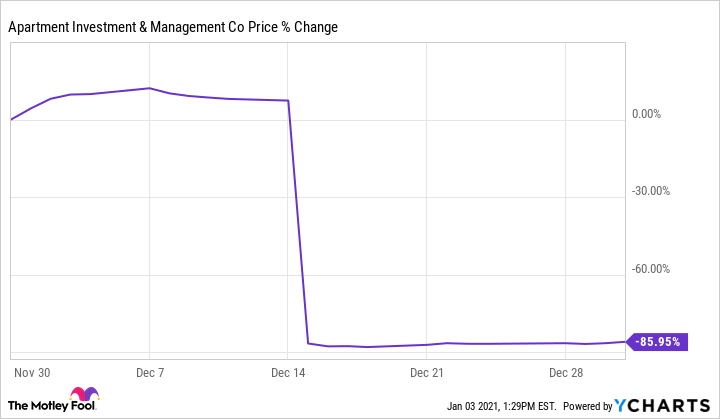 Apartment Investment and Management Co (Aimco) announced in September that it would be splitting into two separately run, publicly traded companies. The split resulted in Aimco being dropped from the S&P 500 index; Tesla was added as its replacement soon after.

Shareholders of record as of Dec. 5 received one share of Apartment Income REIT for each Aimco share they owned. Roughly 90% of Aimco's properties were spun off to the real estate investment trust (REIT), which crushed the former's share price.

Aimco will remain focused on developing and redeveloping apartment communities, while Apartment Income REIT stands as a pure play in the existing apartment rental market. American Income's REIT status means it is required by law to return at least 90% of its pre-tax income to shareholders in the form of cash dividends, and the trust looks like the more dependable of the two companies.

Following the separation, some investors and analysts believe Aimco is in position to be acquired or taken private. The company received a non-binding acquisition offer from Westdale Partners prior to its separation from American Income REIT last month, though no potential buyout price was mentioned. Aimco's management rejected the offer and went ahead with its planned separation, stating that the buyout proposal significantly undervalued the company.

Aimco's December stock collapse also isn't what it looks like at first glance. But Investors looking for a dependable income generator in the apartment property space will be best served by American Income REIT.