The last few years have been a mixed bag for investors in the nascent marijuana industry. The investor euphoria of 2017 and 2018 was followed by a crash in 2019 as expected profits didn't materialize.

2020 has been a different story. Profits are still a rarity in the industry, but companies in some segments -- particularly the multistate operators in the U.S. -- are generating healthy sales growth that could turn into positive earnings in 2021.

One company that's already well in the green and growing rapidly is Innovative Investment Properties (NYSE:IIPR), the only real estate investment trust (REIT) that specializes in leasing properties to those rapidly growing cannabis operators. IIP stock rose 151% in 2020. Is that kind of performance sustainable? 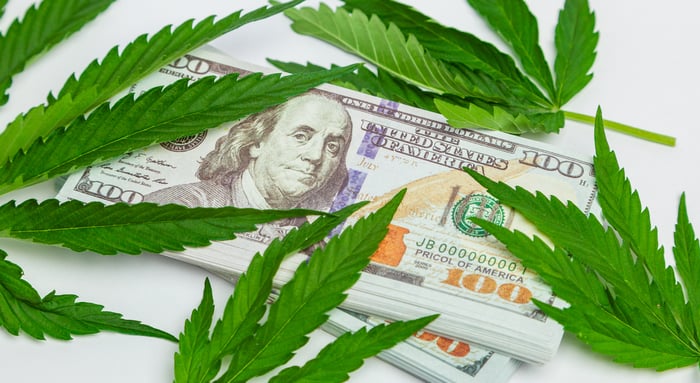 IIP is in the real estate business, but what it really does is provide capital to an industry that's starved for it. Marijuana is still illegal at the federal level, so companies involved in its production have a hard time getting loans from banks, which are subject to federal regulation. IIP will typically buy a marijuana operator's production facility and lease it back to them, freeing up millions of dollars that the operator can tap for expansion.

The combination of high demand for capital in the rapidly expanding cannabis and limited competition from traditional sources has been golden for IIP. Revenue in the third quarter was up 41% from Q2 and 197% from the quarter a year ago. The company's investment in its portfolio has tripled over the last year, from $410 million in Q3 of 2019 to $1.2 billion as of November. The quarterly dividend has risen 50% over the last four quarters and now yields 2.7%.

Next year should be strong as well. The company owns properties in 16 states, or less than half of the 35 states where medical marijuana is legal. That gives it plenty of room for expansion through acquiring new properties. IIP also grows by providing new capital for expansion of existing facilities, so its relationships with the biggest multistate operators will continue to generate growth even without moving into new states. Analysts expect 2021 revenue to jump 71% from this year and earnings per share to grow 70%.

Next year looks solid, but will the demand for IIP's services support growth for the next five years? The underlying driver is the growth of legal marijuana production in the U.S., and that seems set on an upward trajectory. Cannabis legalization initiatives were on the ballot in five states in November, and all passed. The company cites market research that suggests U.S. regulated cannabis sales will grow 174% from $12.4 billion in 2019 to $34 billion in 2024, a 22% compound annual growth rate, and that all states will have medical cannabis by 2025.

Whether IIP can continue to find opportunities at the same rate is another question. The company's new investments have declined for three straight quarters:

The decline may be a temporary phenomenon, and the company is optimistic that opportunities are plentiful. If we assume that IIP can continue to invest $180 million per quarter for the next five years, we can get a rough idea of where the company could be at the end of 2025.

Five years of investments at that rate would amount to a commitment of $3.6 billion in new capital. Historically, IIP generates yield on invested capital of about 13%, meaning that these investments over the next five years could generate $468 million in new annual rent and fee income. The company's contracted rent today stands at $157 million per year, so new investments could bring IIP's contractual income to $625 million five years from now, a fourfold increase and an annual growth rate of 32%.

The capital to fund these investments isn't free. IIP generally raises it by issuing new shares of its stock. That $3.6 billion is just under the company's current market capitalization, so if the share price didn't rise, it would have to roughly double the number of shares outstanding to finance growth. If the shares continue to appreciate, the dilution would be less. I think that if rental income grows at 32%, per-share measures such as earnings and the dividend could sustain an annual growth rate in the range of 20% to 25% over the next five years, tripling these metrics.

One of the worst things that could happen to Innovative Investment Properties would be federal marijuana legalization. That would open up new and competing sources of capital for cannabis producers. Legalized interstate marijuana commerce also would allow the multistate operators to consolidate operations in fewer locations, rather than needing production facilities in every state where cannabis is legal. Federal legalization could also open the door to U.S. corporations buying up marijuana producers and funding growth out of their corporate resources.

Fortunately for IIP, federal legalization probably isn't on the immediate horizon. A new bull market in marijuana stocks may continue to boost the shares of the multistate operators, making it easier for them to raise capital from investors. But these companies are more interested in fueling growth from acquisitions, and I think leasing their facilities will continue to be an attractive proposition to them.

Finally, even though all indications are that the cannabis industry has plenty of growth ahead of it, the market is still in its infancy, so any investments in this space involve the risk that the story doesn't play out as smoothly as investors hope.

The stock's a buy even with slower growth

Growth by Innovative Investment Properties over the next five years won't be anywhere near the scorching rate of the last two years, but it doesn't have to be for investors to profit. The 2.7% yield would make it attractive even if it were growing in single digits, given that the cash flow that supports that dividend is coming from leases with an average length of 16 years to tenants in a booming industry.

IIP's business is capable of growing enough to triple the value of its shares in the next five years. That assessment is based on plenty of assumptions in a rapidly changing industry, making it highly uncertain. Still, this top marijuana stock could still beat the market even with much slower growth. Risk-tolerant investors could collect a generous dividend as the story plays out.