Shares of Cleveland-Cliffs (NYSE:CLF) rose 32.2% in December, according to data provided by S&P Global Market Intelligence.

It's been a wild end of the year for Cleveland-Cliffs, which saw a 29% rise in October and then a 33% rise in November before increasing yet another 32.2% in December. It turns out the bold bets Cliffs has made in the steel segment over the past year were incredibly well timed. 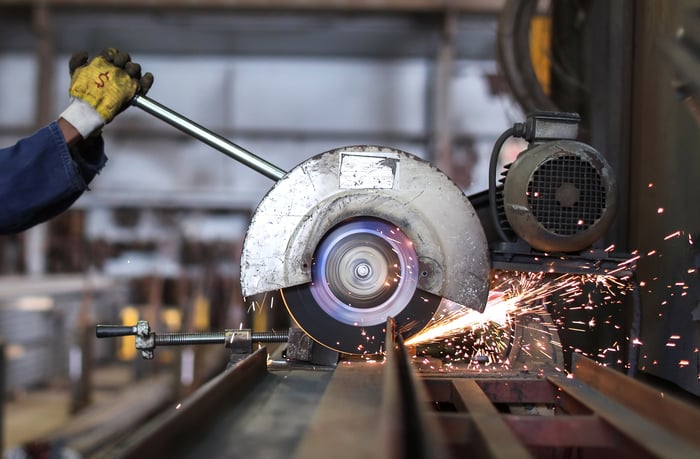 In December, Cleveland-Cliffs officially closed on its acquisition of the U.S. operations of international steelmaker AlcelorMittal (NYSE:MT). That acquisition, which was announced back in September, followed on Cliffs' acquisition of AK Steel earlier in 2020. The two massive steel acquisitions have transformed Cliffs from just an iron ore miner into the largest integrated steel manufacturer in the U.S., with a particular emphasis on automotive steels.

That turned out to be great timing, as the price of steel has surged in recent months. After supply cutbacks and limiting capacity due to the COVID-19 pandemic, the steel industry has undershot demand, which has surprised to the upside as automobile buying has come back stronger than many thought.

In fact, the company raised prices on plate steel to $900 per short ton mid-month, only eight days after raising them to $800 per short ton earlier in the month. Remember, the steel industry is cyclical, and after two years of oversupply, the cycle now appears to be turning around, remarkably, in the middle of a pandemic.

Cleveland-Cliffs has only recently closed on both of its steel acquisitions, and the current environment is anything but normal. Yet based on 2019 numbers, Cleveland-Cliffs said the combined companies would generate $17 billion in revenue and $1.7 billion in adjusted EBITDA, including synergies.

However, 2019 was a recessionary year for the steel business in the U.S., as tax cuts and tariffs led to oversupply while the trade war dampened demand. Therefore, expect the combined companies to be even more profitable going forward, should the industry recover and the U.S. government protect U.S. steel manufacturing from low-cost foreign imports.