Shares of integrated steel producer Cleveland-Cliffs (NYSE:CLF) rose 33% in the month of November, according to data from S&P Global Market Intelligence. Cleveland-Cliffs is closing in on its acquisition of AlcelorMittal (NYSE:MT) U.S. operations, which would make Cleveland-Cliffs the largest U.S. flat-rolled steel operator in the U.S.

As such, Cleveland-Cliffs rose on an increase in domestic steel prices and anticipation for further commodity strength in the wake of the November elections. 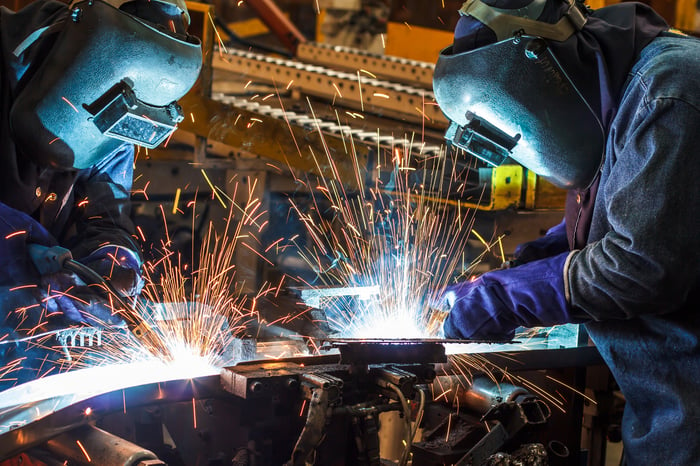 The election of Joe Biden in November lit a fire under many cyclical stocks, as investors anticipated stimulus policies that might benefit the economy. Not only has Biden advocated for economic stimulus, which would lift commodity stocks, but Biden's economic plan also includes a "Buy America" initiative that would steer spending toward domestic manufacturers. As the largest U.S. iron ore miner and integrated steel producer, those policies should benefit Cleveland-Cliffs.

Steel prices have also been surging already, as recovering demand has outstripped constrained supply. Auto demand is recovering from the coronavirus downturn, and steel producers have been cautious about ramping up capacity, both out of safety concerns and fears of over-supplying the market in case there is a "double dip" recession. During the middle of the month, GLJ analyst Gordon Johnson upgraded all names in the steel sector, reacting to surging steel prices in a "reflation trade" he believes will continue.

Cleveland Cliffs has had an epic surge after gaining 29% in October and 33% in November. Investors looking to buy shares now should have a positive view on U.S. steel prices going into 2021. That will likely depend on the actual implementation of policies that encourage domestic auto buying, or those that curtail foreign competition, and/or subsidize domestic steel production.

Of course, long-term buyers should likely hold a positive view of the "new" Cleveland Cliffs, which will come out of this crisis completely transformed by the acquisitions of AK Steel last year and AlcelorMittal USA this year. Merger synergies and consolidation could make the industry more profitable over the longer-term, which should help all steel players' bottom lines.