If Democrats take the House, Senate, and presidency, the following five stocks stand to benefit from new stimulus legislation proposed by the Biden-Harris campaign.

Three weeks from Election Day, investors should be preparing for a possible "blue wave" this November.  A political "wave" occurs when one party takes the White House, House of Representatives, and the Senate, allowing that party to steer the direction of the country for the next two to four years.

With little time left, polls have consistently shown Joe Biden with a solid lead, not only nationally but also within key swing states. Meanwhile, Democrats already control the House of Representatives, and there is a high probability Democrats will also take back control of the Senate. Polling data site 538.com currently gives Democrats a 72% chance of winning a majority in the Senate and Joe Biden an 87% chance of winning the presidency.

While Biden's economic plan does call for a marginal increase to the corporate tax rate, research firm Moody's models that it would also create 7 million more jobs, and lower the unemployment rate to 4% one year ahead of the baseline scenario. That's because the Biden plan also includes stimulative investments in targeted sectors to boost economic growth. Oxford Economics estimates 2021 GDP growth will reach 5.8% under the Biden plan, versus 3.7% growth under the baseline.

If the Biden plan gets adopted in something close to its current form, the following five stocks could all stand to benefit handsomely. 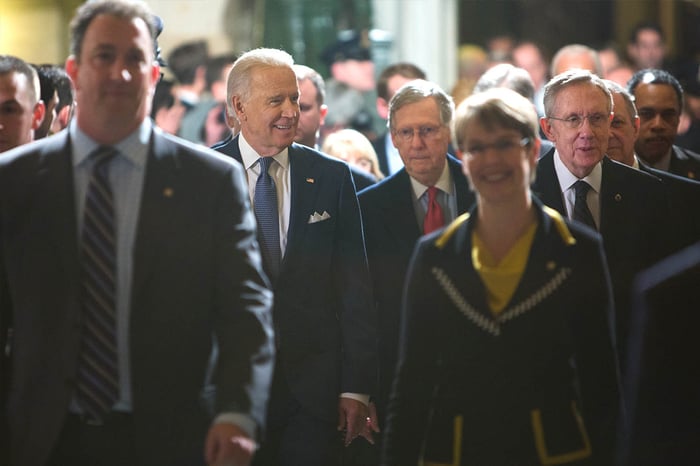 Both Brookfield Infrastructure Partners (BIP -2.23%) (BIPC -1.91%) and Brookfield Renewable Partners (BEP 0.07%) (BEPC 0.32%) are two of the four listed companies under Brookfield Asset Management (BN 0.78%), one of the largest alternative asset managers in the world.

Brookfield Infrastructure owns assets across utilities, midstream energy, transportation, water distribution, and data centers around the world, which could benefit from increased infrastructure spending. Meanwhile, Brookfield Renewable Energy owns hydroelectric, wind, solar, and storage assets all over the world as well, and it stands to benefit from the long-term growth trend in renewable energy ascendance.

Both companies would be likely to benefit under the Biden plan, which includes market-oriented incentives for private companies to build more renewable wind and energy plants and modernize America's infrastructure and electrical grid. The Biden plan also includes $300 billion in research and development incentives, with a specific mention of battery technology. That could not only help BEP's storage segment but also make wind and solar even more cost-effective, since power could be stored even when the wind isn't blowing or the sun isn't shining.

For Brookfield Renewable Partners in particular, renewable incentives could turbocharge its solar growth. In its second-quarter letter to shareholders, CEO Sachin Shah outlined a very favorable outlook for solar energy, noting that solar installation costs had fallen more than 75% in just the past five years and is now the most cost-competitive energy alternative, even without subsidies. With Biden Plan incentives, Brookfield Renewable's goal of having the majority of its power assets coming from solar within 10 years could be accelerated even more quickly.

In addition, as one of the largest-scale renewable-energy asset managers and a with long track record of operational excellence, BEP and BIP would be prime candidates for any sort of public-private partnerships on large-scale clean energy infrastructure projects under a Biden administration.

One year ago, Cleveland-Cliffs (CLF 1.60%) was the United States' largest independent iron ore miner, with operations in Wisconsin, Michigan, and Ohio. Fast-forward to today, and Cleveland Cliffs is now the largest integrated steel producer in the U.S. after its dual acquisitions of AK Steel and the U.S. operations of international steelmaker ArcelorMittal.

The Biden plan should benefit U.S. materials stocks in general and the "new" Cleveland-Cliffs in particular in not one but several ways.

Biden's plan includes a $400 billion "Buy American" provision for federal purchases, which includes not only finished goods but also input materials such as steel. Biden's proposal points out that in 2018 alone, the U.S. Department of Defense spent $3 billion on foreign construction contracts and $300 million on foreign engines and vehicles that could have gone to American companies. By mandating those purchases go to U.S. companies, it could give Cleveland-Cliffs a leg up in being able to sell to the U.S. government without having to cut prices to match cheap foreign imports.

In addition, the AK Steel acquisition gave Cleveland-Cliffs leadership in selling advanced steel products to America's auto manufacturers, especially the ultra-strength steels to create lightweight vehicles and make them more energy-efficient. The Biden plan mentions lightweight materials as a targeted category for the aforementioned $300 billion in research and development incentives. That means Cleveland-Cliffs could potentially receive government incentives for the research and development it is already doing in this sector.

Finally, AK Steel is also the only U.S. company to make electrical steels used in the country's electricity grid. That particular segment has been hurt by lower-cost foreign imports, so the "Buy America" mandate combined with increased infrastructure spending would especially help Cleveland-Cliffs in that end market.

Another feature of Biden's economic proposal is a $15,000 first-time homebuyer tax credit, aimed at enabling homeownership for millennials and families that struggle to save enough for a down payment. As a bonus, the credit would apply when homebuyers make the purchase, so they won't have to wait to claim the credit when they file their taxes later that year.

The policy would enable lower-income families to begin building wealth by owning a home, while also receiving other benefits of homeownership such as the mortgage interest deduction. That increased wealth would benefit not only those individuals, but also the economy as a whole.

Realogy took a hit last quarter during the pandemic, with closed home sales down 21% in its franchise group and 25% in its in-house brokerage group. However, an economic recovery combined with a greater ability for Americans to buy and sell homes would lead to a big-time rebound for the sector overall and Realogy in particular.

The aforementioned $300 billion research and development incentives under the Biden plan also targets 5G and artificial intelligence technology, which could benefit Applied Materials (AMAT -2.67%). As the world's leading semiconductor equipment machine vendor by revenue, Applied Materials is one of the best-equipped American manufacturers to pioneer breakthrough technologies in semiconductors and semiconductor manufacturing. Applied should already benefit from a new U.S. plant being constructed by chip foundry Taiwan Semiconductor Manufacturing (TSM -0.16%), which announced in June it will build a $12 billion project in Arizona with the help of government incentives.

However, those incentives could offset a potential cutoff of Applied's business with China, where it made 33% of its revenue last quarter. The Trump administration recently threatened to cut off equipment sales to Semiconductor Manufacturing International Corp. (SMIC.Y), or SMIC, which is China's largest foundry. In the near term, Applied and other equipment makers will have to apply for a license to supply SMIC. For its part, SMIC has denied it supplies China's military and insists it only makes consumer and commercial products.

However, while Biden and Democrats have also made it clear they will be tough on China, a Biden administration could set a friendlier tone and perhaps take a more lenient stance in supplying Chinese foundries.