It's easy to overlook that plenty of great businesses were born elsewhere. Some of the best get missed because they operate in the background.

A 2017 study found that Americans were among the least likely people to travel beyond their own nation's borders. That could be due to lack of interest, the long distances involved in traversing oceans, or a number of other reasons. But it certainly doesn't stop what's produced by international companies from coming to the U.S.

Many Americans likely use these products and services without even realizing where they originated. But it's staying under the radar and making other brands successful that has helped Diageo ( DEO -0.30% ), Shopify ( SHOP -2.57% ), and ASML Holding ( ASML -2.26% ) all grow into respected businesses (at least by investors).

These three companies may not get a lot of public notice, but are they great investments today? Let's explore a bit more and try to find the answer. 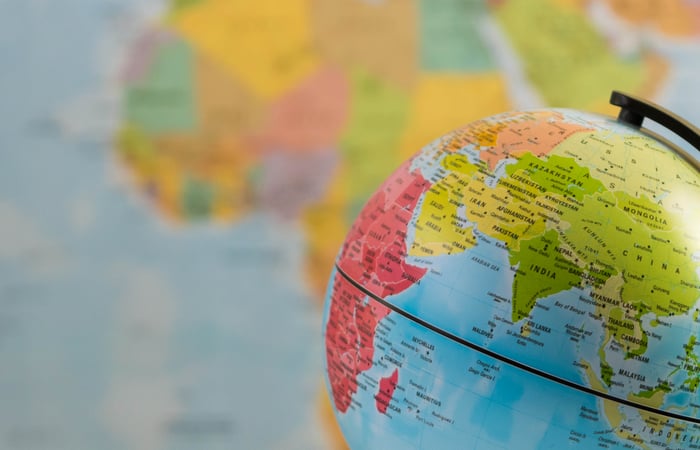 The U.K.-based spirits producer owns a wide portfolio of beverage brands including Guinness, Johnnie Walker, and Smirnoff, and those names are far better known than that of the company that produces them. Still, having a slew of popular alcohol brands can only help a company so much when the restaurants and bars that sell them are closed or operating at a reduced capacity. Diageo's sales declined 8.7% year over year to 11.75 billion pounds (about $14.6 billion) for the fiscal year that ended June 30. The company guided for lower year-over-year revenue for the first half of its fiscal 2021 (July through December) but it is seeing a sales resurgence, particularly in the U.S. U.S. competitor Brown-Forman ( BF.A 0.30% )( BF.B 0.82% ) confirmed the trend, reporting 9% year-over-year sales growth in the May to October period, led by strong demand for Jack Daniels in the U.S. Investors seem to expect Diageo's business to be back on track shortly, as the stock price sits almost exactly where it began 2020.

The company may have weathered the pandemic, but longer-term headwinds could prove more challenging. The percentage of college-age Americans who said they abstain from alcohol grew from 20% in 2002 to 28% in 2018. The trends are similar in the U.K. Of course, every generation has its vice, and a study of Americans ages 30 to 80 found they have been drinking 14% more often during the pandemic.

Also worth noting: Now that 15 states and the District of Columbia have legalized recreational marijuana, demand for alcoholic beverages could sink further. A 2017 county-level study found that following the legalization of cannabis for medical purposes in a locale, sales of alcohol were reduced by an average of 12%.

With dozens of brands, Diageo will be well-positioned to capitalize on whatever drinking trends emerge post-pandemic as consumer tastes invariably change, but it's a slow-growth company. With the stock currently trading at 31.5 times its pre-pandemic full-year earnings -- 30% higher than its five-year average -- investors may be better served to wait for a more opportune moment to buy shares of Diageo.

This fast-growing Canadian software-as-a-service player provides merchants with an easy-to-use platform for launching and operating online storefronts. It offers an array of integrated tools for e-commerce, marketing, handling payments, and fulfilling orders. During a December virtual presentation, management described what it does as "arm[ing] the rebels." Unlike Amazon, which commoditizes its merchants into a list under a search box, Shopify has established an ecosystem that facilitates commerce without getting in between businesses and their customers. As a result, most customers will have no idea if an e-commerce site they are visiting is a Shopify client.

When brick-and-mortar businesses found themselves compelled to rapidly shift online to survive during the pandemic, many picked Shopify to assist them. Its revenue for the third quarter rose 96% year over year to $767.4 million. Similarly, gross merchandise value -- the value of all sales on the platform -- rose 109%. Those aren't the only numbers that indicate the platform is adding value for business owners. Merchants continued adopting the company's offerings -- like cash advances and loans from Shopify Capital, logistics from Shopify Shipping, and the checkout experience or installment plans from Shopify Pay -- at a higher rate in the third quarter. Also, the number of partners who made a referral was up 63% to 37,400 in the 12-month period ending Sept. 30.

This Dutch maker of lithography systems used to create microchips calls itself "the most important tech company you've never heard of." It's hard to argue with that. Virtually every device that has a chip in it relies on ASML's technology. Its machines use light to print patterns on silicon wafers, but that doesn't begin to describe the complexity of the company's latest extreme ultraviolet (EUV) lithography machines. These utilize droplets of molten tin, vaporized by lasers into plasma, emitting radiation which is bounced off mirrors so smooth that if they were the size of Montana, no bump on them would be more than 1 millimeter high.

These chip-fabricating machines, which are the size of a double-decker bus, cost about $120 million apiece. And they're back-ordered for two years.

ASML has about a 62% share in the lithography market, but it's the only maker of cutting-edge EUV machines. Originally, EUV lithography technology was expected to be deployed commercially in 2007, but it wasn't until 2018 that the first customer was using it. Now that it's here, ASML's sales are taking off. For the past four reported quarters, the company's sales rose 26% year over year to 13.76 billion euros, and net income climbed by 49% to 3.34 billion euros. The company will need to keep growing at a similar pace if its shares are going to outperform from here. Based on the 9.55 euros per share that analysts estimate it will earn next year, its forward P/E ratio will be 20% above its five-year average. ASML is the kind of stock that investors can feel safe buying during a pullback, but it will take one to bring shares back in line with their historical valuations.