When it comes to bitcoin, I'm kind of like Switzerland. I'm not on either side in the war over the popular cryptocurrency.

Even if you're a huge fan of bitcoin, though, you might want to consider another alternative. There's a stock that's a better buy: Novavax (NASDAQ:NVAX). 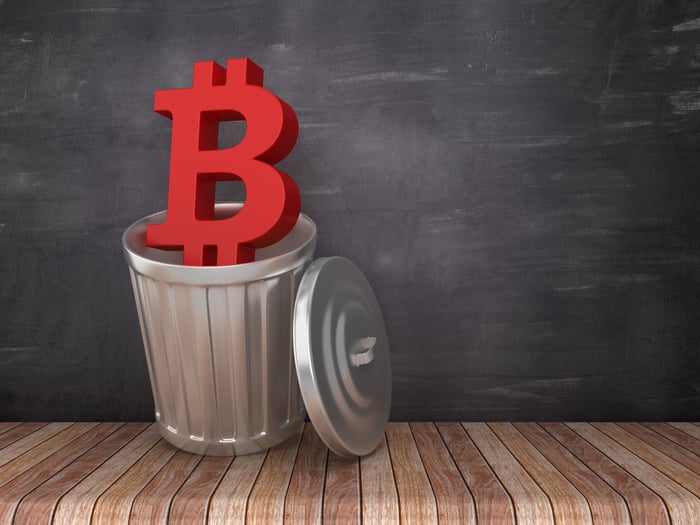 Most people who buy bitcoin aren't doing anything sophisticated like hedging against inflation or betting on the decline of the U.S. dollar. They're in it simply to make a huge return on the coin's momentum. There's also a fear of missing out. You might call these individuals "MOMO/FOMO" investors.

But if you wanted to make a massive gain and didn't want to miss out in 2020, Novavax was a much bigger winner than bitcoin. Don't believe me? Here's the tale of the tape: 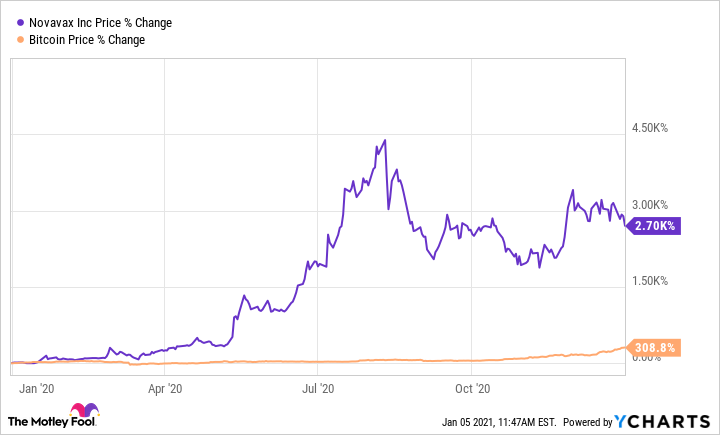 Novavax didn't just outperform bitcoin last year; it absolutely trounced the cryptocurrency. Why? Investors were fired up early in 2020 about the potential for the biotech's flu vaccine candidate NanoFlu. Novavax reported stellar results for NanoFlu in March in a head-to-head study against Sanofi's market-leading flu vaccine FluZone Quadrivalent.

Investors' enthusiasm went through the roof when Novavax announced in July that it was receiving $1.6 billion in funding for its COVID-19 vaccine program from the U.S. government's Operation Warp Speed. Its momentum continued after the biotech reported encouraging results for its experimental coronavirus vaccine the following month.

Of course, you shouldn't buy bitcoin, biotech stocks, or anything else only because of their previous performance. The future is much more important than the past.

I won't pretend to claim I know what the future holds for bitcoin or Novavax. I do think, though, that the factors driving Novavax's prospects are clear-cut. That's not necessarily the case with bitcoin or any other cryptocurrency.

If Novavax's coronavirus vaccine NVX-CoV2373 delivers high efficacy along with a solid safety profile, the stock should soar again in 2021. If it doesn't, the biotech's share price will likely sink. It's that simple.

There's a good reason to be optimistic about Novavax's chances. The earlier results for NVX-CoV2373 were so good that several analysts referred to the experimental vaccine as potentially best-in-class. Novavax has already lined up multiple supply deals for its COVID-19 vaccine. If all goes well, the company stands to make a lot of money in a short period of time.

We won't have to wait very long to find out how NVX-CoV2373 fared, either. Novavax expects to report initial results from a U.K. late-stage study of the vaccine soon. It also began a late-stage study in the U.S. and Mexico at the end of 2020. Results from this study should be on the way in just a few months.

In some ways, Novavax and bitcoin are similar. They're both speculative assets that could skyrocket or sink. They're attractive to aggressive investors who want to win big and aren't afraid to take on risks.

But with Novavax, it's easier to understand exactly why it might move higher or lower. The potential drivers behind its success or failure are less cryptic than those behind cryptocurrency.

Make no mistake about it: The potential growth drivers for Novavax are compelling. The company has a market cap of less than $8 billion and could have two blockbuster vaccines on the way with NVX-CoV2373 and NanoFlu. Not everyone will agree with me, and that's fine, but I think the case for Novavax over the next year is stronger than the case for bitcoin.