2021 has started out well for the stock market, but Monday brought a brief pause in the upward moves of many market benchmarks. Market participants appear to be slightly more realistic about how long it could take for the global economy to recover from the damage done by the COVID-19 pandemic, with prolonged high levels of unemployment creating challenges for millions of Americans. As of 11:30 a.m. EST, the Dow Jones Industrial Average (DJINDICES:^DJI) was down 65 points to 31,033. The S&P 500 (SNPINDEX:^GSPC) had fallen 14 points to 3,811, and the Nasdaq Composite (NASDAQINDEX:^IXIC) had lost 93 points to 13,109.

Auto stocks are once again in the headlines, and the biggest news came out of China over the weekend. There, NIO (NYSE:NIO) made a big announcement that helped stoke excitement about its future. Meanwhile, Twitter (NYSE:TWTR) wasn't as fortunate, as investors wondered about the potential impact of a controversial move involving one of its most popular accounts.

Shares of NIO were up 8% on Monday morning. Investors reacted favorably to the company's annual NIO Day event, at which it unveiled a new vehicle that will break new ground for the Chinese electric vehicle specialist.

The most important piece of news coming from the event was the unveiling of the ET7 sedan. Until now, NIO has concentrated on SUVs, with three different models targeting that segment of the market. The ET7, however, will resemble Tesla's (NASDAQ:TSLA) Model 3 to a much greater extent, although the NIO vehicle aims to set a standard of luxury above its rival's. 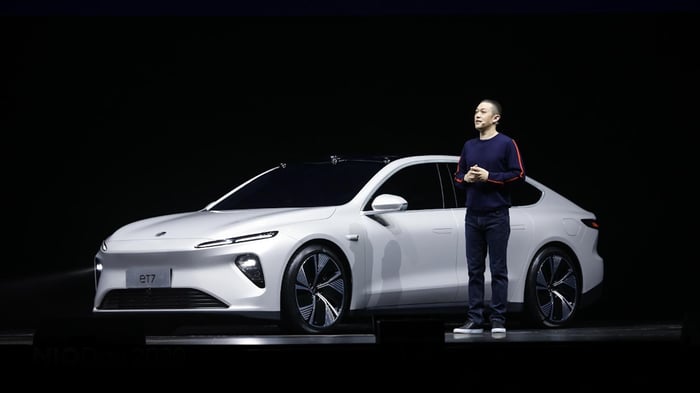 NIO is pricing the ET7 at almost $70,000, which is substantially higher than the Model 3. However, that price includes an upgraded battery pack that features improved driving range. Even more impressively, the ET7 boasts lidar sensors that allow for autonomous driving.

Investors have hoped that NIO would be able to take this key step toward broadening its product line. Going forward, it'll be interesting to see how NIO fares, especially in its home Chinese market as Tesla ramps up production capacity there.

Meanwhile, Twitter shares were down almost 6% on Monday morning. The social media company is facing strong opinions on both sides of an issue that has faced Twitter for a long time.

Twitter said late Friday that it would enforce its "glorification of violence" policy by permanently banning the personal account of President Trump. An explanation in a Twitter blog post showed how the company approached the issue, taking two tweets and seeking to put them into a broader context that included the violence at the Capitol last week.

Yet stock analysts worry that Twitter might see significant fallout as a result of the move. Even before the decision, Twitter had seen some difficulty in growing its user counts. Many find it likely that Trump supporters will leave the service en masse, especially if a rival social media presence arises to serve that audience more directly. At least some advertisers could also shift away from Twitter in the short run.

Twitter had been on a nice run in 2020 as its stock climbed to record highs. Now, though, investors will want to see what impact the growing discord over social media could have on its business in the months to come.