Shares of SolarEdge Technologies (NASDAQ:SEDG) have tanked today, down by 11% as of 11:05 a.m. EST, after Tesla (NASDAQ:TSLA) quietly launched its own solar inverter. That news represents a major threat to both SolarEdge and Enphase Energy, the two companies that currently dominate the market for solar inverters.

Electrek reports that Tesla has started to offer its own inverter, which was one of the few components that the electric-car maker was still sourcing from third-party suppliers. Tesla expanded into the solar energy market with its controversial 2016 acquisition of then-sister company SolarCity, which Elon Musk co-founded with his cousins. 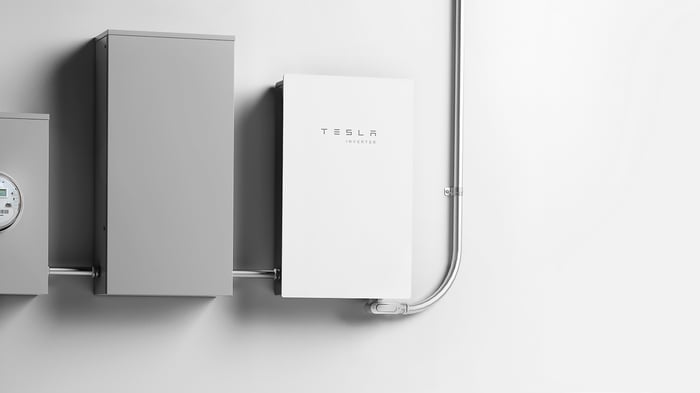 Generally speaking, Tesla aggressively pursues vertical integration strategies that give it greater control of its value chain, so the move comes as little surprise, especially since the company has strengths in developing power electronics. Its vehicles also include inverters that can convert electricity from direct current (DC) to alternating current (AC).

SolarEdge partnered with Tesla back in 2015 to provide inverters for its solar installations, and the company introduced an inverter designed to integrate with Tesla's Powerwall in 2016.

Tesla transitioning to an in-house solution represents a clear threat to that relationship, although it's unclear how long it may take Tesla to make the switch, or whether it intends to potentially dual-source inverters and keep SolarEdge in the mix. Additionally, Tesla's market share of U.S. solar installations has been steadily declining for years as the company focuses more heavily on its core automotive business.

SolarEdge shares gained a whopping 236% in 2020 and popped earlier this month when Democrats won the Georgia election runoffs and control of the U.S. Senate. Investors are optimistic that an incoming Biden administration with full Democratic control of Congress will result in climate policies that support renewable energy like solar.