Please ensure Javascript is enabled for purposes of website accessibility
Log In Help Join The Motley Fool
Free Article Join Over 1 Million Premium Members And Get More In-Depth Stock Guidance and Research
By Taylor Carmichael - Jan 16, 2021 at 6:25AM

There are some warning signs around this vaccine-maker that investors should take seriously.

Vaxart (VXRT 2.44%) had an amazing run in 2020. The tiny biotech started off the year as a micro-cap stock, but when the COVID-19 pandemic struck, it -- like many vaccine-related stocks -- took off. Vaxart jumped out of obscurity and delivered one of the market's top performances of the year, rising by more than 1,530%.

Wall Street was particularly excited about Vaxart's coronavirus vaccine candidate, because it is delivered in the form of an oral tablet. All of the leaders in this vaccine race -- including those that have already crossed the finish line and earned approval -- are injections. So, the theory goes, if Vaxart's pill is successful, the company will have an opportunity to take a significant market share because pills are far more popular and easier to distribute than shots. Its pills can be stored at room temperature, giving them a big advantage over the COVID-19 vaccines being sent around the world right now. (The mRNA vaccines from Pfizer and Moderna must be shipped and stored at extremely cold temperatures.)

So there's a clear bull case for the stock. What about the bear case? 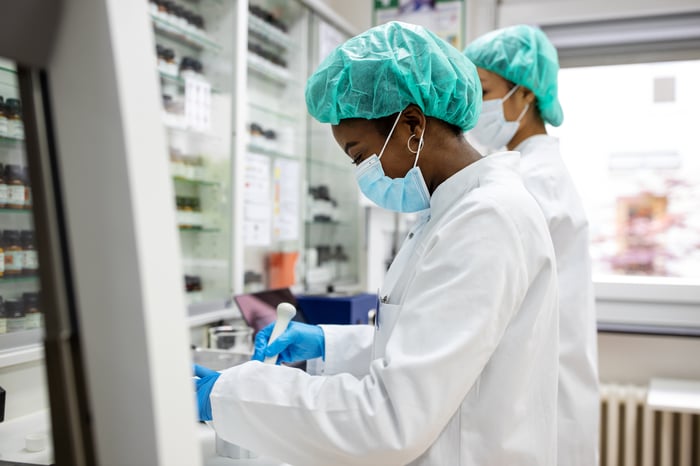 There are no trial guarantees

The big risk for Vaxart is one that plagues biotechs in general. Until the results of all the clinical studies are in, we can't know whether its COVID-19 vaccine candidate works, or how well. If the candidate's efficacy is not high enough to earn it FDA approval, expect Vaxart's stock to get obliterated. In fact, that could happen to the stock long before we hear the final word from a phase 3 trial. I suspect bad news from a phase 1 trial would clobber the stock as well. And here's why I think that might happen.

What happened with the OWS animal study?

On June 26, Vaxart issued a press release stating that its vaccine candidate had been "selected for the U.S. Government's Operation Warp Speed (OWS)." Not surprisingly, the market reacted strongly to the news. On June 25, the stock closed at $3.61 a share. By June 26, it had jumped to $14.30, before falling back to $8. That was one heck of a daily swing. And in retrospect, all the excitement was unjustified.

At the time, OWS was writing a lot of large checks to biotech companies to help them speed up the development and production of their coronavirus vaccine candidates. Moderna, for example, received $483 million. AstraZeneca was given $1.2 billion. In early July, another tiny biotech, Novavax, was granted $1.6 billion. While there are no outright false statements in the Vaxart press release, in many ways, it was misleading. The primary OWS selection process involved finding companies with potential vaccines that looked promising in the lab, and giving them money in order to speed up clinical trials and get a jump on building out their manufacturing and distribution infrastructure.

None of that happened with Vaxart. The company received no federal cash. What OWS actually did was ask for samples of the vaccine so that the government could test it in primates. Yes, OWS was interested in Vaxart's drug candidate (because it was a pill). But there was no validation of the science. Indeed, OWS wanted to perform a primate test precisely because it deemed Vaxart's animal data to be insufficient.

It has been six months, so one might ask: What was the result of those primate tests? Answer: We don't know. There's been little to no news. And six months is plenty of time for an animal test to produce results  -- particularly in the realm of COVID-19 vaccines, where all the trials are operating at an accelerated pace.

If the animal trial data was positive, I think we would have heard news by now. And OWS would have routed some money to Vaxart to support its efforts to get the pill into human trials faster.

Instead, it's as if this OWS study -- which was huge news back in June -- simply went down a rabbit hole and never came out. Another red flag for me is that when Vaxart talks about its animal data today, it talks about its hamster data. While of course it's nice to have any sort of new data, OWS scientists deemed that hamster study data was insufficient.

Both the DOJ and the SEC have opened investigations

In July, Vaxart was served with subpoenas from the U.S. Attorney's Office in the Northern District of California. The company reported that the subpoena was in regard to "the Company's participation in, and disclosure of, an Operation Warp Speed-funded nonhuman primate study, and option grants, warrant transactions, and other corporate and financing matters disclosed since March 2020."

In August, the Securities and Exchange Commission (SEC) opened up an "informal inquiry" into the same issue, and wanted to see the same documents. Also in August, some class action lawsuits were filed alleging "breach of fiduciary duty" and "unjust enrichment." An insider, Armistice Capital -- which has two executives on Vaxart's board -- sold 27 million Vaxart shares in the days following the June 26 memo. The hedge fund's ownership in Vaxart dropped from 29% to 0.2%, according to one of the lawsuits.

The company's COVID-19 vaccine candidate is currently in phase 1 human trials. We should have a data readout from them sometime in the first quarter. But given the lack of news in regard to the primate study, and the way it was hyped up right before massive insider sales, I would avoid this stock.