Please ensure Javascript is enabled for purposes of website accessibility
Log In Help Join The Motley Fool
Free Article Join Over 1 Million Premium Members And Get More In-Depth Stock Guidance and Research
By Brett Schafer - Jan 18, 2021 at 9:05AM

The at-home exercise brand has many copycats. But can it differentiate itself?

Peloton (PTON 6.51%) stock has had a phenomenal run over the last 12 months. The shares have gained 412% over that period, as demand for the company's exercise bikes and digital subscriptions soared due to stay-at-home orders.

However, Peloton's success has attracted a horde of new competitors who want a piece of the booming at-home exercise market. Companies like NordicTrack offer Peloton-esque bikes, while lululemon athletica's (LULU 10.29%) Mirror competes directly with Peloton's new non-cardio offerings. Can these companies steal market share? Or does Peloton have a business model that separates it from the pack? 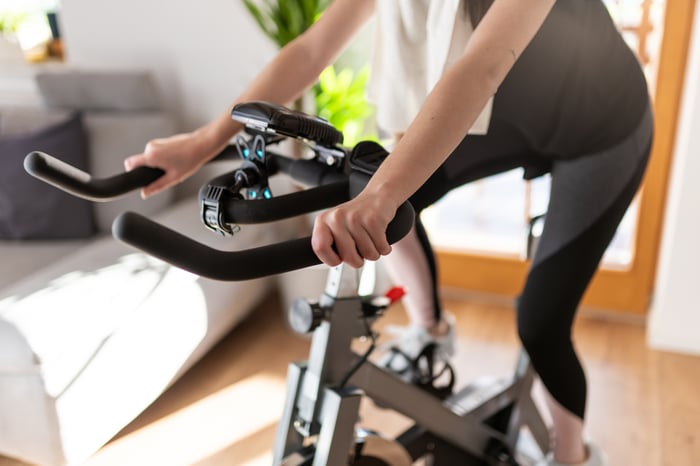 What the competition is offering

Peloton pioneered technology-enabled fitness equipment and remains the market leader. However, NordicTrack -- which is owned by Icon Health & Fitness (a private company) -- recently upped its game and essentially built a Peloton Bike copycat. The S22i Studio Cycle costs $1,999, can be financed at 0% APR for 39 months, and has a 360-degree rotating HD screen, live workouts, and community leaderboards. Sound familiar? Peloton thought so as well -- enough that it decided to sue Icon Health last May for copying its live streams and leaderboard format.

NordicTrack has also tried to beat Peloton on pricing. It is currently offering one year free for its iFit membership (which gives users access to live classes) with the purchase of an S22i Studio Cycle. Peloton owners have to pay an extra $39 a month for a similar offering. This undercutting may be why Peloton dropped the price of its Bike from $2,245 to $1,895, making it cheaper than the S22i.

On the non-cardio front, which Peloton is really leaning into (strength workouts were up 500% last quarter), Mirror is its largest competitor. Mirror sells a 40-inch wall-mounted "mirror" that can also display video. It costs $1,495 (or $42 a month for 36 months) and also has a $39 monthly subscription to access live classes from 50 different workout genres.

Mirror is reportedly on pace for $150 million in revenue in 2020. That is small compared to Peloton's $2.3 billion in sales over the last 12 months. However, Lululemon recently bought the company for $500 million and plans to invest aggressively in the Mirror brand this year.

Many investors think Peloton has a moat, or competitive advantage, versus competitors like NordicTrack. The two main arguments are:

Brand strength is hard to quantify and rather subjective. Historically, only a few mass-market companies like Apple have convinced customers to pay up for their product when competitors offer similar features at a lower price. Can Peloton do the same relative to its exercise bike competitors? It has a net promoter score of 94, one of the highest of any company in the world, an example of how loyal Peloton customers are to the brand.

Investors should also track the rollout of the Bike+: Peloton's premium offering, which has a price tag of $2,500. If that product succeeds in a major way, the company may have more pricing power than some investors think. So while any competitor like the S22i can copy Peloton's hardware (there's nothing proprietary about an exercise bike) -- theoretically making it a commodity product -- customers right now value the Peloton brand above all else.

Peloton may have an advantage at scale with its digital subscription offering, too. As more users subscribe to the service, the company gets cash that it can invest in instructors. That improves the value proposition of the service, hopefully reducing churn and attracting even more users to sign up. However, with only 1.33 million connected-fitness subscribers at the end of last quarter, Peloton is likely still far away from achieving meaningful economies of scale. It could definitely get there eventually, though.

Right now, Peloton trades at almost 20 times its trailing-12-month sales, and over 260 times its projected earnings for the next 12 months, making it one of the most expensive stocks on the market. However, if you believe the company has established a moat and is on its way to dominating the at-home exercise market, it is likely worth it to pay up for shares here. Just know that at these levels, a lot of future growth is likely already priced in.