Please ensure Javascript is enabled for purposes of website accessibility
Log In Help Join The Motley Fool
Free Article Join Over 1 Million Premium Members And Get More In-Depth Stock Guidance and Research
By Nicholas Rossolillo - Jan 19, 2021 at 10:10AM

Disney's content creation technology puts it far ahead of its peers in the battle for streaming TV dominance.

It's no secret that the movie industry is facing unprecedented upheaval. The global box office is on partial lockdown because of the pandemic, and there's no telling what consumer demand for trips to the cinema will look like once COVID-19 has been beaten.

Swooping in to fill the entertainment void has been streaming TV content. But monetizing and profiting from content via subscription is a totally different game from the high-stakes, high-reward game of theatrical releases. Someone needs to rewrite the script.

What is this "secret" weapon?

Specifically, I'm talking about a segment over at Lucasfilm, the Star Wars parent Disney acquired for a $4 billion song in 2012. It isn't the Death Star's destructive powers, but rather the creative power of the company's "StageCraft" tech -- via Lucasfilm subsidiary Industrial Light & Magic (ILM). 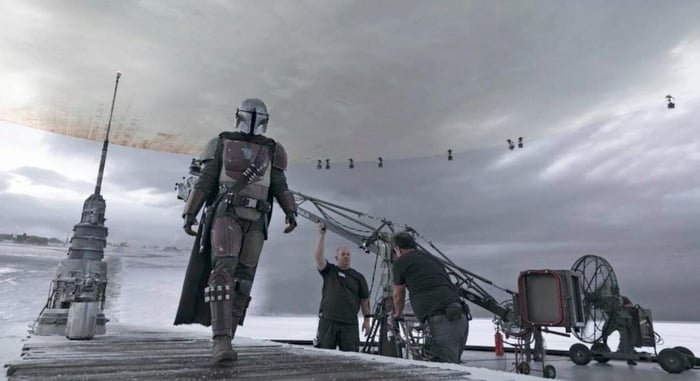 The StageCraft studio is put to use during the production of The Mandalorian. Image source: ILM.

In simple terms, StageCraft is a virtual production setup. Giant LED screens (or sometimes small ones, depending on a production crew's needs) display a virtual environment in which the stars of the film or show can perform. The tech also combines elements of pre- and post-film production and accompanying software, and because it's essentially a large TV, multiple sets can be swapped in and out on the same day of filming if necessary. Disney fans have been treated to the final product already, with writer-director Jon Favreau making use of StageCraft on The Lion King and both seasons of The Mandalorian. George Clooney's Netflix (NFLX 1.90%) film The Midnight Sky also tapped ILM for its StageCraft tech. And Warner Media (part of AT&T (T 0.09%)) is reportedly using StageCraft in the filming of The Batman.

Virtual production sets like this have been instrumental for filmmakers managing the effects of the pandemic. It reduces or eliminates the need for travel. Crew sizes are smaller. Production time is accelerated. Disney may have set off a revolution. At the virtual Consumer Electronics Show (CES), Sony (SONY 2.55%) unveiled its own version of the tech featuring big LED screens and software. But paired with its extensive library of popular franchises and an incredibly fast-growing subscription service in Disney+, Disney holds a powerful hand here in a new age favoring at-home entertainment.

How to pay for more with less

The trick with streaming TV, though, is that consumers want quantity. And a low-cost monthly subscription isn't exactly conducive to turning a profit if big-budget projects are the norm. Just look at the estimated production cost (excluding marketing expense) of recent films like Warner Media-produced Tenet (estimated at $205 million). With a worldwide box office haul of just $363 million as of this writing, the film has been a financial flop. Blame the pandemic, sure, but with stay-at-home entertainment now firmly entrenched as part of the "new normal," theaters' slice of the entertainment pie is likely going to be skinnier than in times past.

Tenet writer-director Christopher Nolan has been critical of Warner Media's decision to debut all its 2021 films on its HBO Max streaming service concurrent with their theatrical release, claiming it's a short-sighted decision that discards a massive profit generator. But the reasons for Warner Media and parent AT&T's decision make sense to me. It may lead to a loss in the year ahead, but accumulating subscribers to pay for expensive content is the name of the game right now, and is likely the best long-term decision media companies have right now. Unless, of course, you're Disney, armed with high tech from ILM. Rather than simply playing the subscriber accumulation game, Disney can use StageCraft to increase its number of quality productions and save a lot of coin. Eight episodes of The Mandalorian reportedly cost "over $100 million" to produce. But compare that to the cost of a single episodic film like Star Wars: The Rise of Skywalker at a whopping $275 million -- what many would argue was not of the same high quality as the Star Wars TV show spinoff. Sure, the promise of a $1 billion-plus global box office haul is no longer a possible payoff with streaming, but the big upside is traded for consistent and predictable revenue and a subscriber base Disney thinks can reach a few hundred million worldwide in a few years' time.

Basically, this is an exchange of profit-now for a bigger-profit-later scenario. And Disney can use its weapon to simultaneously fulfill multiple needs: More content, higher quality, and at a lower cost. Plus, ILM does other work besides creating films for Disney. It charges for its services when other production studios are in need of help (like Netflix, for example, mentioned above). This kind of vertical integration with multiple ways to generate income is unmatched in the entertainment world.

Disney is an antifragile business. The pandemic is putting stress on Mickey and company, but the challenges are making it an even stronger business set for years of growth via a new market. Rather than Netflix or any other stock, Disney deserves to be at the top of investors' lists of entertainment and media investments.