Please ensure Javascript is enabled for purposes of website accessibility
Log In Help Join The Motley Fool
Free Article Join Over 1 Million Premium Members And Get More In-Depth Stock Guidance and Research
By Keith Speights - Updated Jan 20, 2021 at 9:38AM

Each of them should win in different ways with Joe Biden in the White House.

Today marks the beginning of the presidential administration of Joe Biden. But it doesn't mark the beginning of the stock market's run in anticipation of the transition in power. That arguably began after Election Day. Since Nov. 3, 2020, the S&P 500 index has jumped by a double-digit percentage.

Many stocks have delivered solid gains over the last couple of months. Some, though, are in a better position than others to outperform the overall market over the next few years. Here are three unbeatable stocks for a Biden bull market. 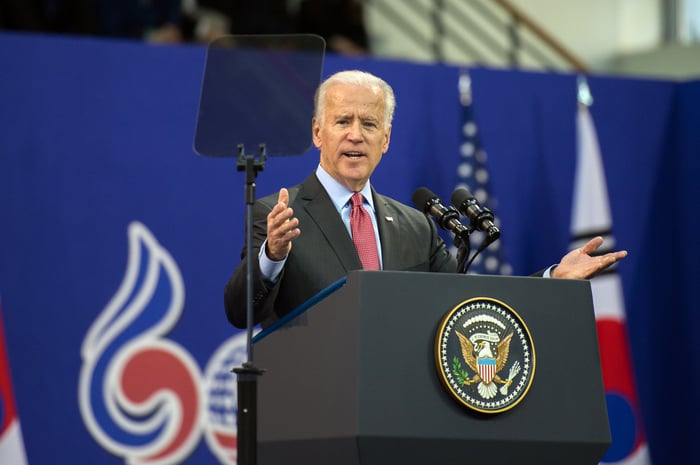 Last year, then-candidate Biden stated, "I know that climate change is the challenge that's going to define our American future." Unsurprisingly, addressing climate change ranks as one of the top priorities for the Biden administration. High among the goals to rise to this challenge is to transition to carbon-free power production by 2035. That aspiration is great news for Brookfield Renewable (BEP -0.20%) (BEPC -0.34%). The company operates hydroelectric, wind, and solar power facilities across four continents.

Brookfield Renewable has been a great stock to own for quite a while now. Over the last two decades, it's delivered an average annual total return of over 18%. Last year, the renewable energy stock soared 74%.

Even if the Biden White House didn't prioritize renewable energy, Brookfield Renewable would be on track to keep up its momentum. Many other countries as well as several big U.S. states have set ambitious carbon-reduction goals. Perhaps even more important, wind and solar are now the lowest-cost sources of energy production.

The company anticipates that it will be able to generate long-term returns of close to 15% annually. With a development pipeline that nearly doubles its current production capacity, that seems quite attainable.

It's true that Biden hasn't been a big fan of marijuana legalization. But the prospects of federal decriminalization of marijuana and major banking reform to help the U.S. cannabis industry appear to be greater than ever with Biden as president and his fellow Democrats in control of both the Senate and the House of Representatives. Multistate cannabis operator Cresco Labs (CRLBF 2.00%) should be one of the key beneficiaries if cannabis reform is indeed on the way.

To be sure, Cresco hasn't had any problems delivering strong growth even with cannabis illegal at the federal level in the U.S. The pot stock vaulted 44% higher in 2020. Cresco's revenue more than quadrupled year over year in the third quarter and soared 63% quarter over quarter.

The company has a clear path to sustained growth in its current markets, which will soon include seven of the top 10 most-populated states that have legalized either medical or recreational marijuana. With Arizona and New Jersey residents voting in November to legalize recreational marijuana, Cresco's growth opportunities will increase even more.

For now, American investors can buy Cresco Labs stock only over the counter. But if marijuana is decriminalized at the federal level, that will pave the way for Cresco to list its shares on a major U.S. stock exchange -- and provide another key catalyst for this high-flying pot stock.

Biden's top healthcare priority will be to more effectively marshal the country's resources to fight COVID-19. He also wants to strengthen the Affordable Care Act (ACA) as well as enable Americans to buy a public health insurance plan similar to Medicare. Both of these should be great for UnitedHealth Group (UNH 0.05%), the nation's largest health insurer.

Strengthening the ACA would likely mean additional support for Medicaid expansion. Medicaid accounts for over 13% of UnitedHealth Group's total medical membership. The company's Medicaid business will likely grow even more.

But a public Medicare option could be the real game-changer for UnitedHealth Group. The company already has a large Medicare business, including Medicare Advantage, Medicare Supplement, and Medicare Part D prescription drug plans. If the Biden White House can cajole the Congress to pass an expansion of Medicare (or a similar program) to serve more Americans, UnitedHealth Group's potential market will dramatically increase.

The company's biggest growth driver right now is its Optum unit, which provides pharmacy benefits management, data analytics, technology, and other services to the healthcare sector. UnitedHealth's planned acquisition of Change Healthcare will make Optum an even more important component of its business. With this deal and the positive prospects that a Biden presidency offers, UnitedHealth Group appears to be an unbeatable stock right now.