Please ensure Javascript is enabled for purposes of website accessibility
Log In Help Join The Motley Fool
Free Article Join Over 1 Million Premium Members And Get More In-Depth Stock Guidance and Research
By Rick Munarriz - Jan 21, 2021 at 10:25AM

After a month of streaming availability HBO Max's biggest movie to date is going away on Sunday.

Your days of catching Wonder Woman 1984 for nothing more than an HBO Max subscription are numbered. The latest film from the iconic DC Comics franchise was released by AT&T's (T 0.09%) Warner Bros. on Christmas Day, making the head-turning move of debuting at local movie theaters and the nascent premium streaming service at the same time. It's a pretty big deal, as AT&T plans to do this with all of its 2021 slated theatrical releases.

Buried beneath all of last month's headlines surrounding the potential blockbuster is that it wasn't going to be on HBO Max forever. Wonder Woman 1984 was only going to be setting up camp on HBO Max for a month. It will leave the platform on Sunday. 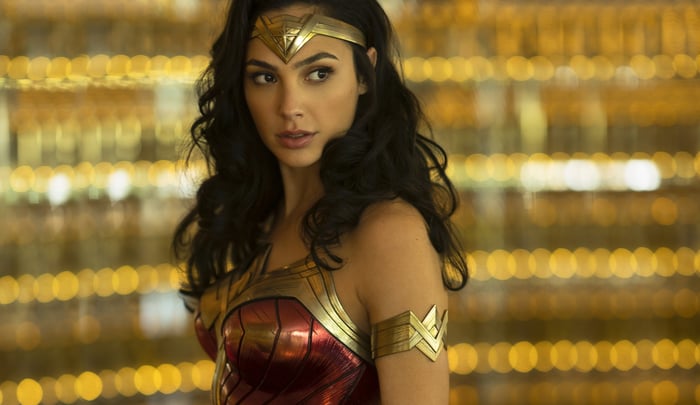 Wonder Woman 1984 will probably come back to HBO Max at some point, but for now it will continue to play at a multiplex near you. As early as March it will probably roll out on DVD and premium video on demand. It's probably after exhausting all of those outlets that the film will come to rest on AT&T's HBO Max for more than just a month.

It's not necessarily a bad strategy. Screening simultaneously on the silver screen for paying customers and in your living room at no additional cost to existing HBO Max subscribers didn't seem to eat into its box office success. The film has generated $35.8 million domestically and a heartier $142.5 million worldwide. A year ago this is the kind of haul that would've seemed catastrophic, but in the new normal the superhero flick's stateside take is the third-highest gross since the pandemic paralyzed the country 10 months ago. Only Tenet -- another AT&T release -- and The Croods: A New Age have had better luck at the movie house.

There's also a chance that ticket sales pick up for Wonder Woman 1984 next week once the HBO Max spigot is shut off. It could pass The Croods: A New Age to take the silver medal before its theatrical run is done.

Given the circumstances it will be hard to view Wonder Woman 1984 as a flop. Despite receiving less favorable reviews than its predecessor -- just 60% of film critics tracked by Rotten Tomatoes recommend the film compared to 93% for 2017's Wonder Woman -- it did what it had to do. It was able to cover stiff distribution costs on the theatrical front. It helped give HBO Max a boost when it needed it the most after a slow start to the platform. Toss in the potential trickle of home video releases in a couple of months and one can even say that AT&T's strategy may be the one for other studios to follow.

We'll get a better feel for AT&T's studio approach as 2021 plays out. Some of its more notable releases that will hit theaters the same day as HBO Max later this year include Dune, In The Heights, and The Matrix 4. A game plan that seemed recklessly brazen two months ago could be exactly what AT&T needed to stand out in the cutthroat space of media stocks. If it works you won't need Wonder Woman's golden lasso to get the competition to fess up and admit that AT&T was right. They'll just follow its lead.