Please ensure Javascript is enabled for purposes of website accessibility
Log In Help Join The Motley Fool
Free Article Join Over 1 Million Premium Members And Get More In-Depth Stock Guidance and Research
By David Jagielski - Jan 21, 2021 at 6:25AM

The company recently announced it would be selling off the bulk of its wholesale business.

Competition is growing in the healthcare industry, and a pharmacy retailer like Walgreens Boots Alliance (WBA -1.36%) needs to adapt. Tech giant Amazon launched Amazon Pharmacy late last year as it looks to win over customers on price and convenience, utilizing its Prime service. Walmart, which already offers pharmacy services, is expanding further into the industry and will offer low-cost healthcare services at 22 of its stores by the end of this year.

In addition, Walgreens also has to worry about longtime competition from Rite Aid and CVS Health, as both companies are revamping and modernizing their stores. To help free up resources and focus more on its pharmacy business, the Illinois-based company announced this month that it was selling off a big part of its wholesale operations. But does the move put Walgreens in a better position to compete with these companies, or is it a riskier buy? 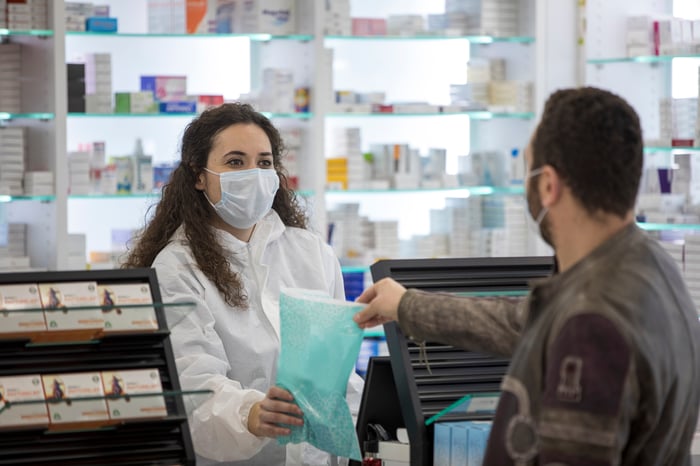 Why the move could be a good one

On Jan. 6, Walgreens announced the $6.5 billion sale of most of its Alliance Healthcare business to AmerisourceBergen (ABC -1.15%). The deal includes an influx of cash -- $6.27 billion and the rest in shares. That's a big bump up from the $1.1 billion in cash and cash equivalents that Walgreens reported when it released its first-quarter results on Jan. 7, for the period ending Nov. 30, 2020.

Although Walgreens didn't specify in the press release announcing the sale what exactly it would be doing with all that cash, it did say the deal would allow it "to increase its focus on growing and transforming its core retail pharmacy and healthcare businesses."

One likely area where Walgreens will spend the money is in primary care and offering more services for its customers. Last year, the company announced it was partnering with VillageMD to open up to 700 Village Medical locations in Walgreens locations over the next five years in an investment that would cost the company $1 billion through a combination of equity and convertible debt. It's a move that's part of a larger trend in the industry.

For instance, rivals Rite Aid and CVS are both making changes to their stores that involve offering more healthcare services rather than just selling products. Rite Aid plans to free up pharmacists' time to make them more accessible to customers. It's not unlike what CVS is doing in providing more services at new HealthHub locations where patients can get help from medical professionals to treat many conditions, including high blood pressure and sleep apnea. Pharmacy retailers know they need to offer more of an incentive to customers rather than just pharmaceutical products, especially if they're competing with Amazon.

But a focus more on pharmacy retail doesn't mean Walgreens is completely out of the wholesale business. Under the deal, Walgreens will continue to own Alliance's Chinese, Italian, and German operations. It also owns a near-30% stake in AmerisourceBergen and is its largest shareholder. Walgreens also announced that its U.S. strategic partnership with AmerisourceBergen would now extend into 2029. Together, the companies anticipate achieving synergies of $150 million in approximately four years -- savings that both businesses will share.

Why the deal might not be a good one for Walgreens

The best part of the deal is that Walgreens gets an influx of cash, which can open up many opportunities for the company, potentially even acquisitions. However, the big problem is that all this competition could further cripple the company's top line. Even before the pandemic, Walgreens wasn't a highly profitable business.

Despite reporting a mammoth $139.5 billion in revenue in fiscal 2020, the company's net income was just $456 million that year. Although impairment charges related to Boots UK of more than $2 billion weighed down its bottom line, even if you add that back, you're still looking at a profit margin of just 1.8%. And in the previous fiscal year, net earnings of $4 billion remained a relatively modest 2.9% of revenue.

In the first quarter of this year, sales totaled $36.3 billion and rose 5.7% year over year. But the company still reported a $308 million loss as a $1.4 billion loss related to its investment in AmerisourceBergen pulled its bottom line into the red. Whether it is impairment or investment losses, with low margins, just about any unusual or nonrecurring item can keep Walgreens' bottom line in the red.

While Walgreens will have more money to spend from this recent sale, that doesn't mean that it will result in larger profits for investors. On the contrary, with competition likely to be more fierce in the near future, that could destroy profitability even further as Walgreens and its rivals compete to offer more for less.

Should you buy Walgreens stock?

In the past year, shares of the healthcare stock have fallen by 12% while the S&P 500 has risen 15%. But there's just not much of a reason to be bullish on the stock right now and that a turnaround will happen as it faces a tough, uncertain road ahead amid all this growing competition. Although COVID-19 vaccinations are helping to bring more business for the pharmacy retailer, the company says that lockdowns related to the pandemic will keep foot traffic low and likely offset any of those gains.

With low profit margins and growth likely hard to come by in the future, it wouldn't be surprising to see Walgreens stock continue to fall in the year ahead. The best reason to buy the stock would be for its dividend, which currently yields 3.8%. That's significantly higher than the 1.6% that the average stock on the S&P 500 pays. And with billions more in cash coming from the AmerisourceBergen deal, investors don't have to worry about this Dividend Aristocrat suddenly halting its payout streak of 45 years anytime soon.