Please ensure Javascript is enabled for purposes of website accessibility
Log In Help Join The Motley Fool
Free Article Join Over 1 Million Premium Members And Get More In-Depth Stock Guidance and Research
By Joe Tenebruso - Jan 22, 2021 at 5:02AM

The COVID-19 pandemic can't stop these companies from making investors richer in 2021.

The pandemic is taking a brutal toll on huge swaths of the economy -- but not all of it. Some businesses have grown stronger over the past year.

If you're searching for investments that can guard your portfolio's value and grow your wealth as the COVID-19 crisis continues, these three competitively well-positioned companies could help. 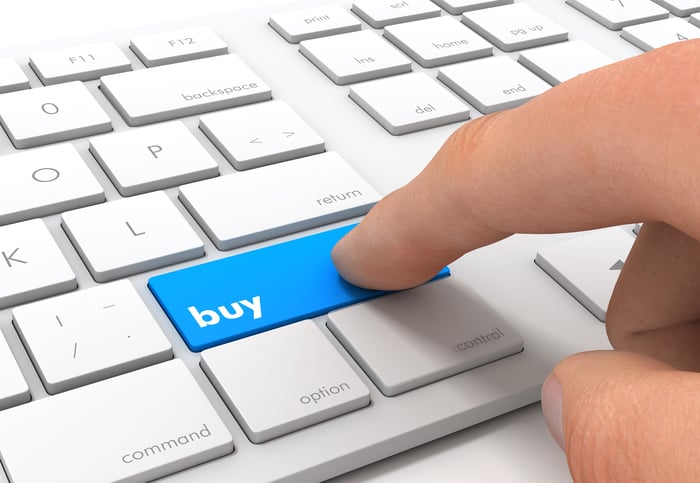 Pet ownership has surged during the pandemic as people have sought animal companionship. And more folks than ever are treating their furry friends like family, so they are increasingly willing to pay up for healthier, more natural food like Freshpet (FRPT 3.79%) provides.

Its broad and steadily expanding retail distribution network places it in a strong competitive position. Its branded refrigerators can be found in more than 22,000 supermarkets and other retailers. Retail space is a valuable commodity, and once a chain installs Freshpet's refrigerators, it's less likely to give dedicated space for a similar product to one of its competitors.

Freshpet is thus well-situated to profit from a booming market. Americans spent $99 billion on their pets last year, according to the American Pet Products Association. Within this massive market, premium pet food is one of the fastest-growing segments.

Management recently issued guidance that Freshpet's sales for 2020 would come in at $318.8 million -- a rise of 30% year over year -- and forecast that revenue would more than triple from there to $1 billion by 2025. Investors who buy shares in Freshpet could enjoy handsome gains in the years ahead.

Target (TGT 2.46%) is serving as a lifeline for many people during the COVID-19 crisis. Its heavy investments in its e-commerce operations are allowing it to provide much-needed pickup and delivery services. These, in turn, are driving the discount retailer's sales and profits higher.

Target spent billions of dollars in recent years to upgrade its stores. Now, those locations also serve as fulfillment centers for online orders, shortening delivery times and reducing the company's shipping costs. Target also made the prescient decision to purchase Shipt for $550 million in 2017 to bolster its same-day delivery capabilities.

The results of these decisions are evident in Target's financial results. Its comparable digital sales soared by 102% during the November and December holiday shopping period, fueled by a 193% surge in sales from same-day services such as curbside and in-store pickup.

Shipt was also a powerful growth driver, with holiday sales growth of more than 300%. Based on its rapid expansion and the market valuations of comparable delivery networks, analysts at UBS say Shipt could be worth as much as $14 billion today -- or about 25 times what Target paid for it.

Better still, Target's soaring digital sales are helping it become far more profitable. Its adjusted earnings per share skyrocketed 105% to $2.79 in its fiscal third quarter, which ended Oct. 31. As its profits grow, Target is poised to reward its shareholders with larger dividends and continued stock price gains.

CVS Health's (CVS 2.33%) acquisition strategy has made it a powerful force in the healthcare industry. From insurance to pharmacy benefit management, drug stores to clinics, CVS has many ways to profit.

CVS's purchase of Caremark for roughly $21 billion in 2006 made it a leading manager of pharmacy benefits, while its $69 billion acquisition of Aetna in 2018 made it a giant in the health insurance arena. Additionally, CVS is a titan in the drug store industry with nearly 10,000 retail locations, as well as an increasingly important player in the medical care market, with approximately 1,100 MinuteClinics and 450 HealthHub locations nationwide.

The company now plays a key role in COVID-19 testing, conducting roughly 70% of the tests done at retail settings in the U.S. through the third quarter. CVS will also have a major part in the country's coronavirus vaccination effort. Analysts at Jefferies estimate that the company could generate an additional $1 billion in gross profit from COVID-19 immunizations, which should help to boost store traffic and sales.

Coronavirus vaccinations should also help to enhance the company's already-strong cash flow production. CVS generated $12.3 billion in operating cash flow through the first three quarters of 2020. Some of that is being used to pay down debt, while some is being distributed to shareholders via a solid dividend that at the current share price yields 2.6%. For investors seeking a way to generate a reliable income stream, CVS is a great stock to buy today.