Please ensure Javascript is enabled for purposes of website accessibility
Log In Help Join The Motley Fool
Free Article Join Over 1 Million Premium Members And Get More In-Depth Stock Guidance and Research
By Dan Caplinger - Jan 24, 2021 at 5:06AM

Find out what one of the most popular active investment managers likes right now.

When you think of exciting investments, exchange-traded funds  might be the last thing that comes to mind. But while most ETFs simply track indexes, the active ETFs offered by red-hot investment company ARK Invest have gotten a lot of attention.

That makes sense when you look at the returns that ARK's funds have earned recently. All five of its actively managed ETFs have more than doubled in the past 12 months, with ARK Genomic Revolution ETF (ARKG 3.68%) leading the pack and tripling since this time last year. ARK Innovation ETF (ARKK 6.00%) and ARK Next Generation Internet (ARKW 5.78%) aren't too far behind. 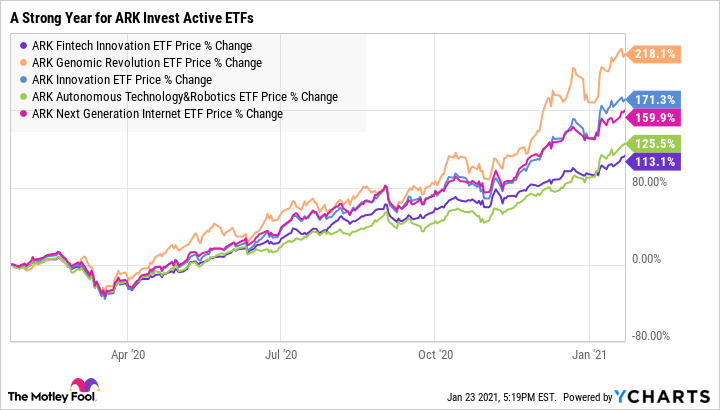 Smart investors want to know which stocks ARK Invest Chief Investment Officer Cathie Wood is looking at. Fortunately, ARK discloses all of its moves every day, and you can see what it's done with only a short delay.

To save you the trouble of looking yourself, below are three of the stocks that various ARK ETFs invested more money in over the course of the past week.

The biggest buy that ARK Fintech Innovation ETF (ARKF 6.96%) made last week was Opendoor Technologies (OPEN 3.65%). The fund made purchases not once but twice during the week, adding a total of more than 406,000 shares. That boosted Opendoor's share of the fund's overall assets by nearly half a percentage point, giving it a 1.79% weighting in the ETF at the week's end. 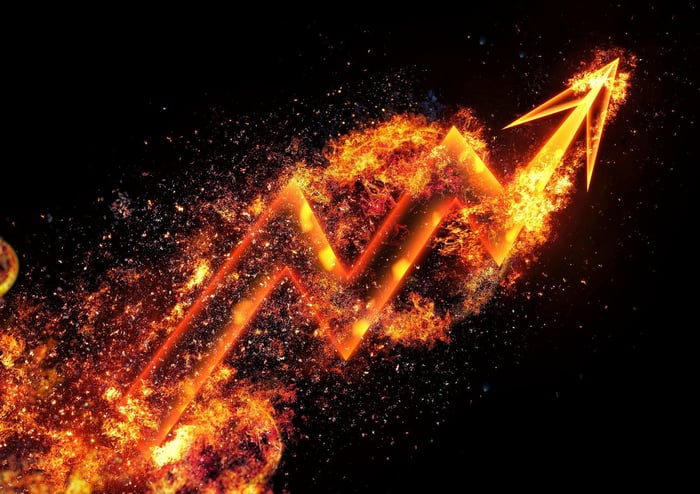 Opendoor just came public last month through a merger with a special purpose acquisition company run by SPAC pioneer Chamath Palihapitiya's Social Capital Hedosophia Holdings. The company is looking to disrupt the entire real estate market by offering a lightning-fast "iBuyer" alternative to the months-long process of listing a home, taking offers, and waiting months for buyers to get financing and finally close the deal. Instead, Opendoor can make its own offer within days in several major markets, and the company hopes to grow to serve other areas as well.

Some aren't convinced of Opendoor's superiority, noting that it has plenty of competition and that the run-up both before and after the SPAC merger went final makes the stock look expensive. However, ARK Fintech Innovation seems to disagree, and it'll be interesting to see if the position keeps getting larger.

ARK Innovation made some big buys during the week, and one of the biggest targets of the ETF was Pinterest (PINS 4.25%). Two purchases added more than 613,000 shares, boosting ARK Innovation's holdings of the social media company by more than a quarter and raising its allocation to nearly 1%.

Pinterest is just one of many social media companies, and it's certainly not the largest. But Pinterest stands out because of its positive and supportive user base, defying many of the stereotypes about the destructive qualities that many social media platforms have.

One criticism of Pinterest has been that it hasn't done as good a job as some of its peers in turning its audience's attention into cold hard cash. Still, Pinterest has plans to boost monetization in the coming year by looking for more from its international participants and using more video content for advertising. The company has to walk a fine line to avoid ruining its positive vibe, but ARK Invest is just one of many investors who think Pinterest can get the job done.

Finally, ARK Next Generation Internet made several moves, and one of the most interesting was adding to its small position in Skillz (SKLZ 10.59%). A big buy of 429,000 shares nearly doubled the ETF's position in the esports mobile game platform provider to 0.40% of the portfolio, and it appears as though Wood might be building a more substantial stake slowly.

Skillz is also newly public through a SPAC combination, and investors are excited about just how many mobile game creators are using its platform to bring their products to market. With Skillz getting a cut of every transaction that players make, the revenue possibilities are nearly endless.

There's still plenty of room for growth, though, as Skillz has only about one in every 1,000 players among its monthly active users. But ARK Invest seems to agree with the company's strategy of investing heavily toward customer acquisition and marketing, and if it can bring even a small fraction of the world's gamers to its platform, the stock could pay off.

Keep your eye on ARK

ARK Invest definitely has tapped into some of the most exciting themes in the market over the past year. Whether that success continues remains to be seen, but one thing is certain: People are taking notice of the stocks in which the company's ETFs choose to invest.