Please ensure Javascript is enabled for purposes of website accessibility
Log In Help Join The Motley Fool
Free Article Join Over 1 Million Premium Members And Get More In-Depth Stock Guidance and Research
By Luis Sanchez CFA - Jan 21, 2021 at 6:12AM

People like to use websites that inspire them to do the things they love. Pinterest (PINS -3.45%) believes that being a beacon of positivity on the internet can be a huge advantage -- and advertisers agree!

Pinterest is a social media platform where people post pictures of the things they love including fashion, cooking recipes, and how they remodeled their kitchens (to name a few examples). It is a highly visual website that is chock-full of information while being highly entertaining. What makes it stand out from competitors like Facebook and Twitter is that it is focused on the finer things in life while avoiding hot button issues like politics or news stories. This makes using Pinterest fun for users and "brand safe" for advertisers.

A source of inspiration on the internet

As it turns out, being a source of positivity and inspiration on the internet is a good business. The company has reported strong revenue growth over the past year and in the third quarter of 2020, Pinterest reported revenue growth of 58% year over year: a dramatic acceleration compared to the 4% growth rate it recorded in the second quarter.

While Pinterest is a fun website to browse, it had some positive impacts from the events of 2020. The Covid-19 pandemic forced millions of people to stay at home which caused a barrage of traffic on Pinterest. In fact, the company's monthly active users (MAUs) soared to over 442 million (as of the most recent quarter). People have flocked to Pinterest in order to discover new ideas such as how to redecorate their kitchen or new cooking recipes. With little else to do in the world, why not jump on Pinterest to find inspiration for a new project?

As Pinterest has seen its user count increase, it has invested in more tools for creators to post engaging content. One recent priority has been to make it easier for users to post video content through a new upload tool. As a result, the company saw video uploads increase by seven times in the third quarter compared to the prior year.

Pinterest has also invested in better tools for brands including a tool that enables advertisers to automatically bid on ads based on dynamic pricing. Another long term goal is to make the website "more shoppable" so that brands can directly sell products to interested browsers. These initiatives demonstrate how Pinterest continues to invest in building upon its platform to enable more content creation and better monetization. 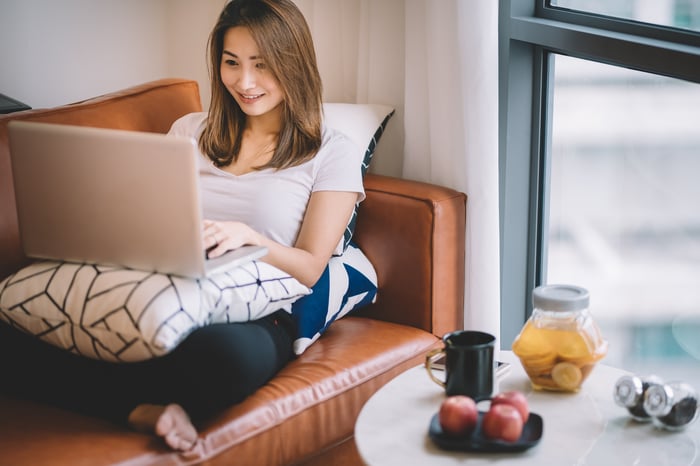 Controversy on other social media platforms

To put Pinterest's story of "positivity on the web" into context, it is helpful to contrast it with competing social media websites.

Facebook came under fire last summer when more than 1,000 brands paused advertising spending on its website until the website addressed better moderating its platform for hate speech. The 'Stop Hate for Profit' campaign was able to successfully pressure Facebook to make changes to its moderation policy which included establishing a new VP of Civil rights to oversee changes.

Twitter was also targeted by the 'Stop Hate for Profit' campaign but has also come under the spotlight for its banning of Donald Trump and thousands of other users who posted misinformation about the 2020 presidential election after the US capital was stormed by a mob of protesters on January 6. Twitter is now dealing with the issue of balancing free speech on its platform and maintaining the health of its platform.

Why does the controversy at other social media websites impact Pinterest? Because Pinterest's lack of controversy makes the website relatively more attractive for advertisers. During Pinterest's Q3 2020 earnings call, management noted that advertisers that boycotted other websites during the summer of 2020 increased their spending on Pinterest.

The hope is that advertisers continue spending on Pinterest but there is a risk that advertisers return to Facebook and Twitter now that they have made changes to improve the health of their platforms.

With all of the controversy surrounding social media websites such as Facebook and Twitter, Pinterest stands out as one of the most brand-safe websites for advertisers. This is because the content on Pinterest is focused on topics such as how to remodel your kitchen, how to dress your dog, or chocolate chip cookie recipes -- not sharing links to news articles or election results.

In fact, according to Pinterest research, 85% of users go to Pinterest when they want to start a new project and 98% of users try new things they find on the website. Therefore, not only is Pinterest's audience large but it is ripe for advertisers to target because the users are very interested in shopping and trying new products.

Brands don't have to worry about positioning their products next to political bickering or hate speech. This reduces a lot of the risk associated with advertising online. In turn, brands have increased their spending with Pinterest (sometimes at the expense of other social media platforms). This trend has led to solid financial results and could continue to boost Pinterest in the future.