Please ensure Javascript is enabled for purposes of website accessibility
Log In Help Join The Motley Fool
Free Article Join Over 1 Million Premium Members And Get More In-Depth Stock Guidance and Research
By Rich Duprey - Jan 24, 2021 at 9:30AM

The convenience store chain has a loyal customer following that can support its growth.

Investors don't have many options when it comes to publicly-traded convenience stores, and arguably, the one c-store many would want to invest in is Wawa -- but it remains steadfastly private.

Yet the cult-like following the combination convenience store, sandwich shop, and gas station chain has developed over the 156 years of its existence helped build the company into a business with over $13 billion in annual revenue. If it went public, it would undoubtedly gain institutional as well as retail investor support. 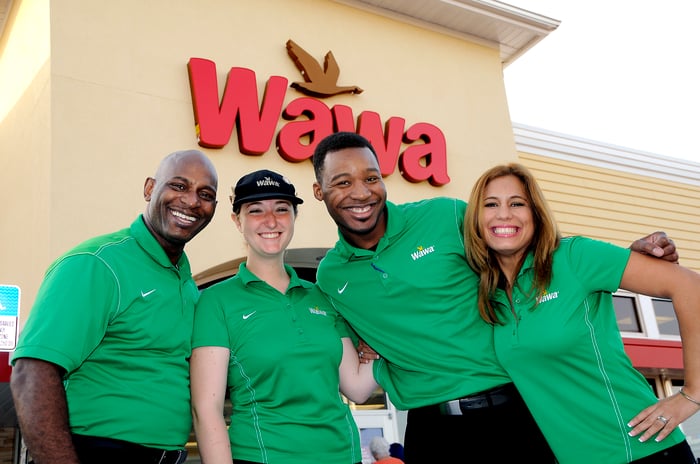 An IPO waiting to happen?

Despite company denials, many believe Wawa's 2014 change from a C-corporation to a closely held S-corporation, and the subsequent consolidation of employee-owned stock into the hands of the founding Wood family, was a prelude to an eventual sale of the company or an initial public offering.

Considering the popularity that special purpose acquisition companies (SPACs) have gained in the past year, if Wawa was to go public, this might be the vehicle to use.

SPACs have been around for decades, but they really took off in 2020 with 237 businesses raising a record $80 billion and accounting for the majority of IPO activity. One of the notable companies using an SPAC last year was DraftKings, the fantasy sports and sports betting leader. C-store chain Arko Corp (ARKO -5.69%) also went public with the help of an SPAC and began trading just before last Christmas.

One of the biggest proponents for SPACs has been former Facebook executive Chamath Palihapitiya, the founder of venture capital firm Social Capital, who has made something of a cottage industry out of the investment vehicle.

Palihapitiya believes SPACs empower company owners, unlike the traditional IPO route in which financial institutions control much of the decision-making process. He would be a great champion of Wawa's family-controlled business, though he prefers tech stocks and the c-store might not enough of a "big ideas" company to fall on his radar. Still, an SPAC could be the right choice for Wawa.

A growing fish in a shrinking pond

There are over 150,000 convenience stores in the U.S., slightly fewer than there were at the end of 2019. The segment has felt the same sort of ill effects from the growth of online shopping as the broader retail sector.

The greatest decline, though, was experienced by single-store operators whose number contracted 3.1% in 2020. They account for 61% of all c-stores in operation. It's the third straight year of declines for this industry, and the Association for Convenience and Fuel Retailing says the last time the industry experienced a multiyear drop was coming out of the Great Recession in 2009 and 2010.

That makes Wawa's purposeful, slow-growth approach to expansion a wise strategy. Despite over a century of business, it has just 880 stores in six states (and Washington, D.C.), primarily located around its Wawa, Pennsylvania headquarters. More than 600 of the stores sell gasoline, a key component of all c-store operations as consumers can fill their vehicles while also doing fill-in shopping. In addition to sandwiches, Wawa sells a variety of fresh foods and beverages.

Wawa is the 10th largest convenience store chain in the country, behind the likes of industry giants such as 7-Eleven, Circle K, and Casey's General Stores (CASY -6.03%).

The chain is not without controversy, however. In 2018, without admitting guilt, it settled a lawsuit by former employees for $25 million that accused the company of cheating employees out of company stock they were promised would be theirs until retirement. It settled a second similar lawsuit last summer for another $22 million.

The lawsuits contend that by consolidating ownership and control of the company within the Wood family, they would be in a better position to sell the company or pursue an IPO.

Wawa denies going public is its intention with a spokesman telling The Philadelphia Inquirer last year, "To be clear, we are committed to remaining privately held and to sharing ownership with our associates through our ESOP. We believe our ownership structure between the founding family and our associates is the foundation of our culture and our ongoing success."

A steady performer like Wawa with a strong brand and plenty of room for expansion could certainly make for a winning stock. Maybe the Woods family is correct that going public would force it to focus on what Wall Street wants rather than the gradual approach the company has taken up to this point.

But Wawa going public, either through a traditional IPO or via an SPAC, would also allow the convenience store's legions of loyal fans to benefit from its success as well.