Please ensure Javascript is enabled for purposes of website accessibility
Log In Help Join The Motley Fool
Free Article Join Over 1 Million Premium Members And Get More In-Depth Stock Guidance and Research
By Courtney Carlsen - Jan 26, 2021 at 6:00AM

Regional banks have outperformed the S&P 500 since November. Here are three regional banks whose earnings have my attention.

Bank stocks were beaten up for the better part of 2020, and for good reason. The global pandemic, low interest rates, restrictions on share repurchases, and general economic uncertainty put pressure on the banking sector.

As economic uncertainties slowly but surely resolve, regional banks have fared well in recent months. The SPDR S&P Regional Banking ETF is up almost 40% since the beginning of November, compared with the SPDR S&P 500 ETF Trust, which has advanced 18% during that same time.

For this reason, I think certain regional banks present a good opportunity for value investors. While the big dogs in the banking sector announced earnings in the past few days, there are many regional banks that have yet to announce. Three I'm watching in the coming days are Axos Financial (AX 3.13%), United Bankshares (UBSI 1.15%), and Glacier Bancorp (GBCI 1.97%). 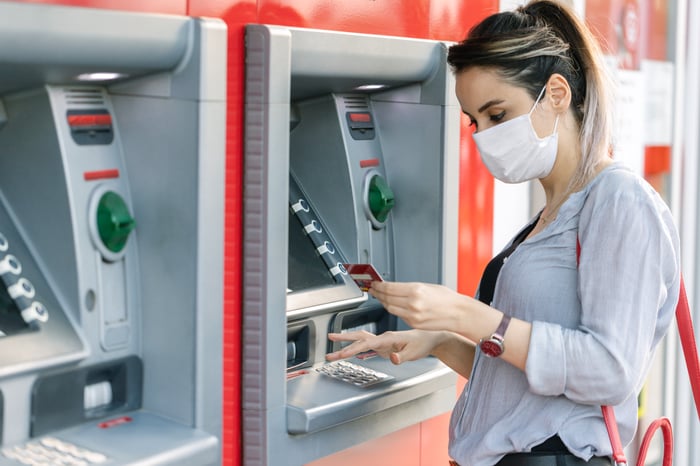 First known as Bank of Internet USA, Axos was recently named America's best online bank for the third year in a row, according to the independent financial comparison site MyBankTracker.com.

Awards are nice and all, but as investors we care about the bottom line. Fortunately, Axos shines in this area as well. The last quarterly earnings period saw loans and leases grow 5.6% to $141 million, interest expense related to deposits drop nearly 50% due to lower interest rates, and mortgage banking income grow to $19.5 million, or 600% compared to the same quarter last year. Taken together, all of these helped net income increase by $12 million, a 30% increase compared to the same quarter last year.

The bank's growth has come while maintaining solid financial metrics. Return on equity for the quarter was 17% (above 10% is considered good). In addition, its efficiency ratio was 46%, meaning noninterest expenses came in at less than half of revenue (below 50% is considered good). Finally, its loan-to-value ratio is promising as well, at 60% (anything under 80% is preferable).

Earnings will be announced on Jan. 28, and analysts are expecting earnings per share (EPS) of $0.82 and revenue of $155.68 million, representing a 22% and 20% growth in those areas, respectively. Investors will want to keep a close eye on the growth of loans and leases as well as mortgage banking income to see if the bank can keep up the stellar growth in these areas.

United Bankshares has branches in the mid-Atlantic region, with a presence as the No. 1 community bank in Washington D.C. and the No. 2 bank in West Virginia based on total deposits. Management is also optimistic about newly expanded operations into South Carolina and North Carolina, which represent the sixth- and 11th-fastest-growing states in the United States in the past year, according to the 2020 U.S. Census.

In the recent quarterly earnings, the bank grew interest income to $210 million, up 10% from the prior year quarter. It was also helped by a drastic reduction in interest expense, which boosted net interest income after loss provisions by 23%. While the bank did see 22% of commercial loans in deferral at one point in 2020, this dropped to 7% as of its earnings from Sept. 30.

The company is also an attractive option for dividend investors. The bank prides itself on its ever-increasing dividend -- which has gone up 47 years straight, and currently yields 3.9%.

United Bancorp announces earnings on Feb. 3, with analysts estimating EPS of $0.61 and revenue of $251.09 million. These estimates would mean EPS remained flat year over year, but they represent a growth rate of 40% in total revenue. One thing I'm looking for is continued growth in net interest income, as well as a continued reduction in commercial loans in deferral, as well as continued growth in the Carolinas.

Glacier Bancorp is a regional bank with locations in the Rocky Mountains and the Southwest. In the past two years, the bank has made strategic acquisitions to expand its presence in Utah and Arizona, as well as establishing a new presence in Nevada with its purchase of Heritage Bank of Nevada.

The bank focuses on serving individuals, small to medium-size businesses, and community organizations, with a focus on lending first mortgage, conventional loans secured by residential properties.

A few things attract me to this bank. The most recent quarterly earnings reported in October showed positive results. Increased deposits, the issuance of $1.5 billion worth of Paycheck Protection Program loans (which brought in 3,000 new customers), and a reduction in interest expense all helped boost earnings. The bank saw net interest income jump 13% due to an uptick in commercial loans, and another 25% jump in non-interest income thanks to the gain on sale of loans. For this reason, EPS was up 42% during that period. It's also another bank paying out good dividends -- yielding 2.3% at Monday's prices.

What I find especially interesting for this bank is that it is in a geographically advantageous area of the United States. Its presence coincides with some of the fastest growing states in the U.S. according to the 2020 Census. In fact, in 2020 the four fastest-growing states were Idaho, Arizona, Nevada, and Utah, all of which are covered by Glacier Bancorp.

The company reports earnings on Jan. 28. Analysts expect EPS to come in around $0.75 and revenue at $199.34 million, which would represent growth of 21% for each of those metrics. As Americans continue to pick up and move to geographic areas covered by Glacier, I'm looking for a continued pickup in residential and commercial loan activity to make this an attractive buy.