Please ensure Javascript is enabled for purposes of website accessibility
Log In Help Join The Motley Fool
Free Article Join Over 1 Million Premium Members And Get More In-Depth Stock Guidance and Research
By Zhiyuan Sun - Jan 26, 2021 at 6:30AM

Could this maverick biotech discover the cure for several debilitating rare diseases?

Editas Medicine (EDIT -4.94%) is quickly becoming one of the hottest biotech and gene therapy stocks on the market. Over the past year, it has more than doubled investors' money. Meanwhile, the industry indicator, iShares NASDAQ Biotechnology Index (IBB -1.50%), only returned a total of 41%.

The most mind-boggling aspect of Editas is that the company already has a staggering $4.1 billion market cap -- despite having no therapies out on the market. Its gene-editing candidates are just in the early stages of clinical testing. So is the company on track to eradicate several uncommon genetic disorders? Or does is its stock's rise an example of investors' sometimes irrational exuberance? 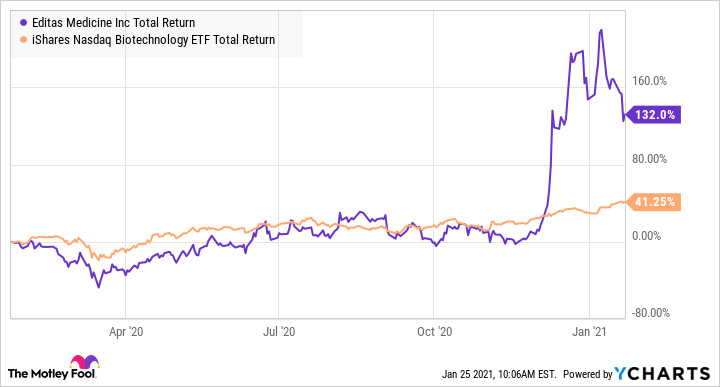 Editas currently has 220 patents protecting its genetic engineering technology, with an additional 800 patents pending review. Its most promising candidates are EDIT-101 for the treatment of Leber congenital amaurosis (LCA) and EDIT-301 to treat sickle cell disease (SCD) and beta thalassemia.

LCA stems from a mutation in the CEP290 gene and causes degeneration of ocular photoreceptor cells, leading to blindness in infants. There are currently 4,000 patients in the U.S. and E.U. and over 30,000 patients in the rest of the world with the condition. EDIT-101 is a subretinal injection that seeks to remove the CEP290 mutation from chromosome 12, restoring the protein responsible for sight. Right now, the phase 1/2 clinical trial for EDIT-101 is enrolling. Editas expects to dose the first patient this quarter, and have clinical data by the end of the year.

The company's new investigation is not without basis. There is already an approved gene therapy for treating LCA and other types of retinal dystrophy called Luxturna. It is marketed by Spark Therapeutics, and it too is a subretinal injection.

Next up is EDIT-301, a potential treatment for two hereditary blood disorders. Severe geometric deformities in the red blood cells characterize SCD, while the reduced production of oxygen-carrying hemoglobin is present in patients with beta thalassemia. There are approximately 180,000 people with the two conditions in the U.S. and E.U. Current treatments can only marginally improve patients' hemoglobin count or reduce the occurrence of life-threatening clotting of irregular blood cells.

EDIT-301 seeks to change this. It is a blood transfusion consisting of genetically modified blood collected directly from patients. The edits occur at the gene cluster located on chromosome 11, which is responsible for creating hemoglobin. The company is seeking to begin dosing for the SCD portion of EDIT-301's phase 1/2 clinical trial this year. It is working toward receiving the regulatory green light for an Investigational New Drug (IND) application for the beta thalassemia portion.

This is very similar to the approach that its competitor, CRISPR Therapeutics (CRSP -4.92%), has taken. In another article, I discussed how SCD patients receiving the company's gene therapy, CTX001, had their hemoglobin levels nearly match those of healthy individuals. 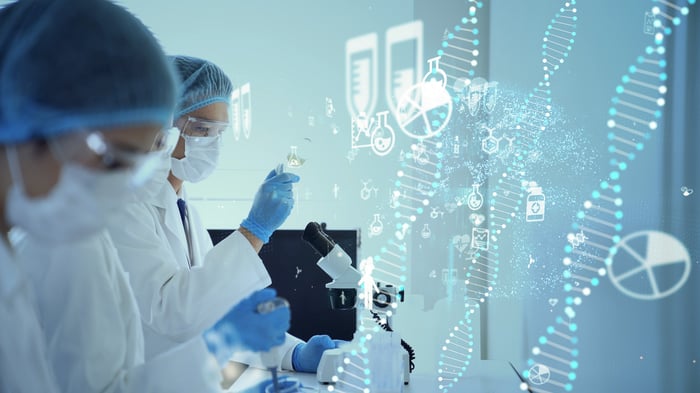 Given the prior successes of CRISPR and Spark Therapeutics in treating hereditary retinal and blood disorders with gene therapy, Editas's candidates seem very promising. Indeed, if it can advance them to approval, it will have huge market opportunities ahead. For example, Spark Therapeutics' Luxturna costs $425,000 per eye treated. Meanwhile, novel drugs for SCD sell for between $7,000 to $15,000 per course of therapy.

Editas is in an excellent financial position with $500 million in cash and equivalents and no debt whatsoever. However, it will likely need a few years to advance EDIT-101 and EDIT-301 to later stages. Luckily, the company has $62.8 million in collaboration revenues as of the third quarter of 2020 and is breaking even in terms of operating income. Recently, it raised an additional $231 million via stock offering for research and development costs.

However, investors should be aware that Editas has lost a cumulative $603 million since its inception in 2013. From 2016 to now, the company's shares outstanding more than doubled to 62.7 million. For now, expect Editas to continue raising cash at the expense of diluting investors.

Astonishingly enough, institutional investors own approximately 87% of all Editas's shares outstanding. Large investment firms usually have dedicated teams of analysts and medical experts who conduct ample due diligence on whether a firm's experimental drug can make it to approval before initiating a position. The company's most famous bull is Ark Investment Management LLC, a prominent early investor of Tesla (TSLA -8.96%). The firm now owns a $681 million stake in Editas.

Overall, given the vast institutional interest, its stable financial position, and the success of similar gene therapeutics in the industry, Editas is a risky but high-reward stock to buy. If you are a biotech investor who is interested in development-stage gene-editing firms and doesn't mind holding their stock for a few years for clinical data, then Editas might be the right pick for you.