Please ensure Javascript is enabled for purposes of website accessibility
Log In Help Join The Motley Fool
Free Article Join Over 1 Million Premium Members And Get More In-Depth Stock Guidance and Research
By Keith Speights - Jan 28, 2021 at 6:10AM

Which stock will be the bigger winner between these two COVID-19 vaccine partners?

Pfizer (PFE 0.50%) and BioNTech (BNTX 6.88%) together pulled off one of the greatest accomplishments in medical history by developing a safe and highly effective COVID-19 vaccine in only a matter of months. That vaccine has already been given to millions of people in multiple countries.

To call what Pfizer and BioNTech achieved a success is an understatement. However, the immediate outcomes of that success have been quite different for the two drugmakers' stocks. BioNTech's shares have more than tripled since the beginning of 2020, while Pfizer stock is basically flat.

Which of these partners' stocks is the better buy going forward? Here's how Pfizer and BioNTech stack up against each other. 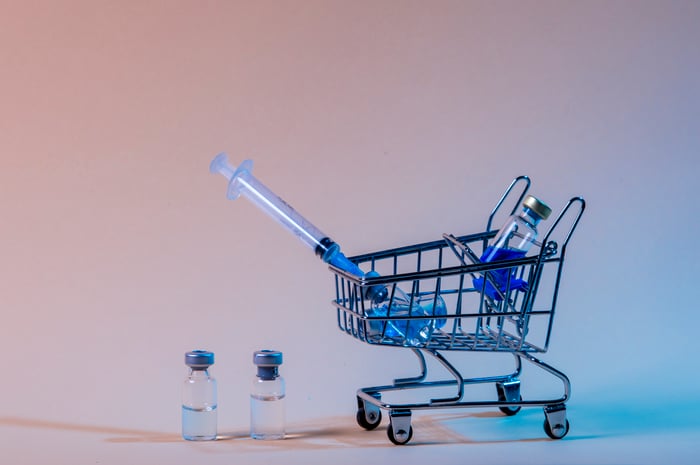 We obviously have to put COVID-19 vaccine Comirnaty (BNT162b2) at the top of the list for why investors would want to consider buying Pfizer stock. Pfizer and BioNTech expect to produce up to 2 billion doses of the vaccine this year. They'll almost certainly sell every dose they make.

Pfizer's pipeline is set to deliver additional growth drivers in the not-too-distant future. The company has 92 programs in clinical development. Six of those are currently awaiting regulatory approval, with another 21 programs in late-stage testing. Pfizer plans to launch 25 new products by 2025.

The company expects to deliver average annual adjusted earnings-per-share growth of around 10% over the next few years. Pfizer's actual growth should be even higher, though, since its projection doesn't include the impact of Comirnaty. Pfizer CEO Albert Bourla has also stated that the company will continue to look for the right kinds of deals to bolster its pipeline, which could boost its growth even more over the long run.

Pfizer also offers an attractive dividend that income investors will probably like. Its yield currently stands at close to 4.2%.

The case for BioNTech

BioNTech doesn't claim a multibillion-dollar product lineup as Pfizer does. It doesn't offer a dividend. It's unprofitable. So what does the German biotech have that Pfizer doesn't? Its relatively small size should give it more room to grow.

Everything good about how Comirnaty will help Pfizer can be cranked up several levels with BioNTech. The much smaller drugmaker will benefit more from the aforementioned nearly $9.5 billion projected revenue this year than Pfizer will. That money will likely vault BioNTech into profitability in short order.

Despite its big gains last year, BioNTech's market cap remains below $30 billion. That reflects a share price of only around three times expected sales -- a really low level for a biotech stock.

Comirnaty is currently BioNTech's only late-stage program. However, the company is working with Roche to evaluate messenger RNA (mRNA) therapy BNT122 in a phase 2 study as a first-line treatment for melanoma.

BioNTech's pipeline primarily features early stage programs. The biotech is evaluating 11 candidates in phase 1 studies for treating various types of cancer. In addition, BioNTech has multiple preclinical programs, including an experimental mRNA flu vaccine it's developing with Pfizer and a promising experimental multiple sclerosis vaccine. It seems likely that BioNTech will use its newfound wealth from Comirnaty to advance more preclinical programs into clinical studies.

My view is that BioNTech could emerge as a major drugmaker over the long run. The problem, though, is that its pipeline is heavily weighted with very early stage programs. There won't be many catalysts in the relatively near future for the biotech other than Comirnaty.

I think that Pfizer is the better overall pick right now. The company is set to deliver stronger growth than it has in years. Its dividend remains very attractive. With Pfizer's shares trading at less than 11.5 times expected earnings, the stock looks like a bargain. Pfizer offers something for nearly any investor.