Please ensure Javascript is enabled for purposes of website accessibility
Log In Help Join The Motley Fool
Free Article Join Over 1 Million Premium Members And Get More In-Depth Stock Guidance and Research
By Jim Crumly – Jan 28, 2021 at 6:04AM

Strong interim trial data boosts the prospects for a treatment already worth billions.

While the world focuses on the rollout of COVID-19 vaccines, antibody treatments that can be given to patients after they've contracted the disease haven't been in the spotlight. New data from Regeneron Pharmaceuticals (REGN 1.32%) suggests that investors might do well to sit up and listen.

Regeneron's cocktail of two monoclonal antibodies synthesized to block the SARS-CoV-2 virus got plenty of press when it was given to President Trump, who subsequently recovered from COVID-19. In November 2020, Regeneron won emergency use authorization from the Food and Drug Administration for the cocktail, called REGN-COV2, in treating patients with mild to moderate cases of the disease. It also scored a contract with the U.S. government to supply 300,000 doses. That deal was just the beginning. 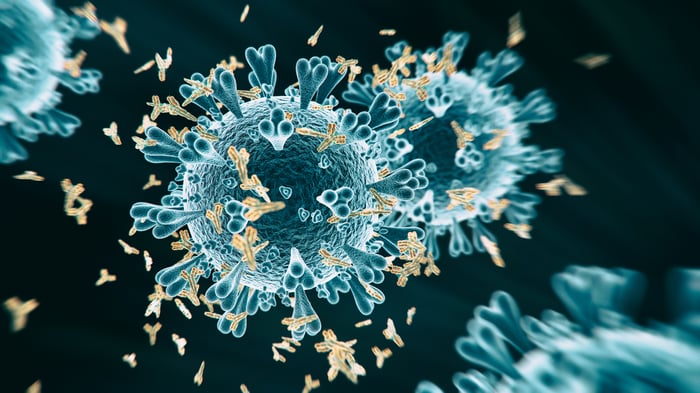 Regeneron is conducting a trial to evaluate the usefulness of REGN-COV2 in preventing infection in the first place. This type of prevention is called "passive immunization," a process that confers short-term immunity immediately, instead of taking weeks like vaccines. The company released interim results from the trial this week. The data so far is stunning.

So far, 409 patients have been evaluated. Subjects are randomized to get either REGN-COV2 or a placebo. The participants were selected from people at high risk of infection due to being exposed to a household member diagnosed with COVID-19. The antibody cocktail was administered as a simple injection, rather than via IV infusion as required in the current authorization.

The trial is far from over, having enrolled over 2,000 participants. That perfect record against symptomatic disease probably won't hold. Still, a successful trial could result in authorization for using the treatment to prevent the disease in people known to be exposed to the virus, potentially opening huge demand.

Regeneron is also testing the use of REGN-COV2 in hospitalized patients who aren't sick enough to need a ventilator. Data released in December was encouraging, with the treatment lowering the risk of ventilation or death by 22%. The treatment also seems to be effective against both the U.K. and South African variants.

But the best news for investors in recent weeks is that the U.S. government has significantly upped its purchases of the antibody cocktail. Operation Warp Speed has agreed to buy as many doses as Regeneron can make before June 30, 2021, up 1.25 billion more than the original agreement. If the company succeeds in getting authorization for a lower dose than was specified in the original authorization, it expects it will be able to manufacture all the 1.25 billion new doses. If it hits that target, the new deal is worth $2.65 billion, thanks to a price tag of over $2,000 per dose. That's a huge boost to the company's results, with analysts expecting 2020 revenue to come in at only $8.5 billion.

Investors don't seem to be giving Regeneron much credit for its COVID-19 efforts despite the obvious success. Shares are selling for roughly the same multiple of forward earnings as they did when the pandemic began. 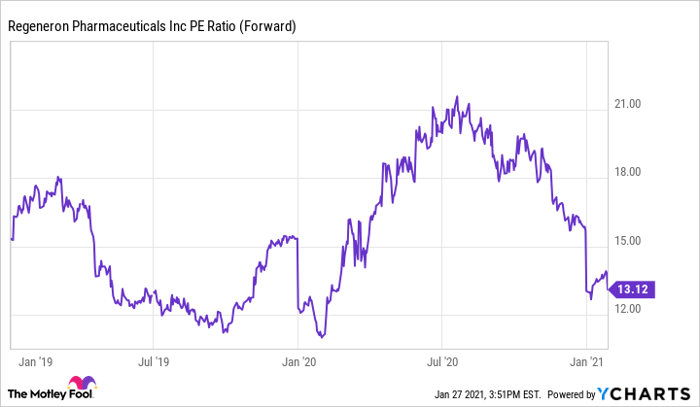 Meanwhile, Regeneron has a healthy pipeline of new drugs in its core cancer, inflammatory disease, and eye disease businesses. The company has six phase 3 programs, 13 of which are in phase 2. It could make six regulatory submissions in 2021. Its four core drugs generated 29% revenue growth in the first nine months of 2020.

I think investors are overly focused on vaccine stocks and not recognizing the pile of money Regeneron will almost certainly make from its antibody cocktail, especially in light of recent news. Even without the pandemic, the company would be a promising pick for biotech investors looking for long-term growth.