Please ensure Javascript is enabled for purposes of website accessibility
Log In Help Join The Motley Fool
Free Article Join Over 1 Million Premium Members And Get More In-Depth Stock Guidance and Research
By Alex Carchidi - Jan 29, 2021 at 6:56AM

Time will always be on the investor's side.

Are you the type of investor who patiently plays the long game, or are you the more impulsive type? While it's easy to give in to the temptation to buy and sell your stocks based on short-term price movements, you'll see the largest gains when you buckle up for the long haul. Five years might seem like a long time to wait for your purchases to pay off, but when it comes to biotech stocks, practiced patience can pay off big.

All of the stocks below have recently met key milestones in their drug development efforts. More importantly, each is planning on making even bigger breakthroughs on the five-year horizon, so they're worth buying and holding until then. Given that these companies are still relatively early-stage and the risks of failure remain high, it'll be prudent for investors to diversify across all five rather than going all-in on any single stock. 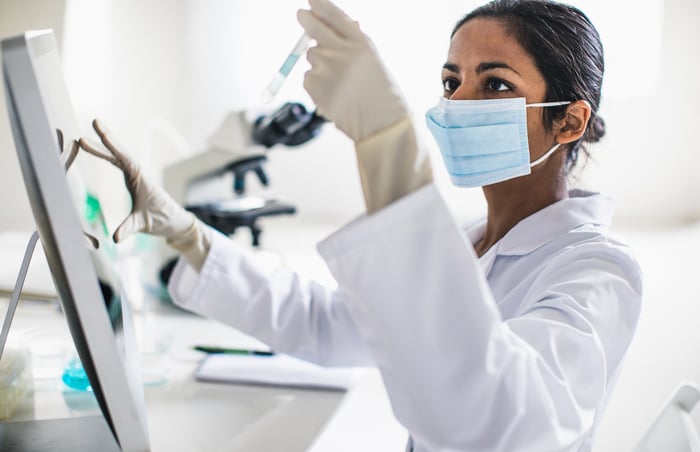 The same may be true for four of its immuno-oncology programs that are currently in clinical development. Elsewhere in the pipeline, its regenerative gene therapy for diabetes mellitus will enter its phase 1/2 clinical trials in 2021, and potentially conclude them in the following years. It needs that time to prove that its products are safe and effective.

Lexicon Pharmaceuticals (LXRX 4.30%) makes sotagliflozin, which is currently approved to treat type 1 diabetes in the EU. Soon, it will likely conclude its registration with U.S.-based regulators and initiate sales shortly thereafter. The company is also conducting phase 3 clinical trials for the drug to see if it's effective at treating heart failure. If successful, Lexicon will have a steady stream of revenue, and it could reach profitability in the next few years. Its project for diabetic peripheral neuropathic pain in phase 2 clinical trials could also drive shareholder returns even further, assuming it too gets approved.

Fate Therapeutics (FATE 1.45%) may not have any products approved for sale, but its collection of immuno-oncology treatments derived from pluripotent stem cells has already made its stock a high performer over the last year. While the stock is doubtlessly a bit expensive at the moment considering how far away the company is from recurring revenue, the company is establishing itself as a leader in the stem cell-derived therapeutics space, which will pay off down the line.

Fate currently has seven projects that are currently in phase 1 clinical trials, which means that it'll likely have at least one of those advancing into the final stages of the process by 2026. 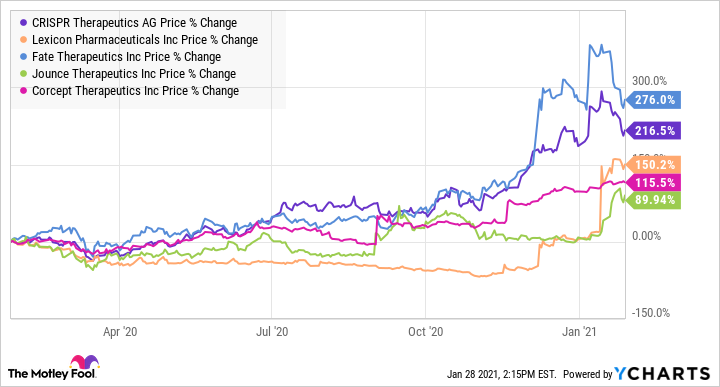 Jounce Therapeutics (JNCE -0.33%) focuses on developing cancer immunotherapies that address underserved patient populations, and it's been a great stock to own over the last year. It'll report two sets of data from a pair of its clinical trials in the second half of 2021, which could bolster a higher stock price.

Through the next few years, Jounce plans to submit an Investigational New Drug (IND) filing to regulators every 12 to 18 months, paving the way for new early-stage clinical trials. With innovation at such a rapid pace, investors will have plenty of growth catalysts to look forward to, assuming Jounce's projects continue to mature.

Corcept Therapeutics (CORT 6.98%) is special because it's already profitable, and it has a larger and more advanced pipeline than the other companies listed here. It makes the drug Korlym, a treatment for Cushing syndrome, and it's also exploring in phase 3 trials another drug for the same indication. The company also has a late-stage pancreatic cancer therapy in development, not to mention a handful of other mid-stage oncology and metabolic disease projects.

If you're a bit worried that the other biotechs on this list might not pay off, you can take heart in that Corcept is considerably safer. Though there's still no guarantee that its pipeline projects will turn into new revenue streams anytime soon, its quarterly revenue is growing by 6% year over year. And it barely has any debt, with a scant $3.03 million owed. In other words, this company's story over the next five years will be about using its proceeds from drug sales to invest heavily in its future opportunities for growth. For a biotech investor, there's no better position to be in.