Please ensure Javascript is enabled for purposes of website accessibility
Log In Help Join The Motley Fool
Free Article Join Over 1 Million Premium Members And Get More In-Depth Stock Guidance and Research
By Zhiyuan Sun - Jan 30, 2021 at 5:35AM

With a mouth-watering return of 1,770% in the past year, Novavax (NVAX -0.27%) is undoubtedly the best-performing coronavirus stock on the market. The company total return growth was nearly triple competitor Moderna's, which already has a vaccine on the market, over the same period.

On Jan. 28, Novavax announced efficacy data in two late-stage trials for its protein-based coronavirus vaccine candidate, NVX-CoV2373. This is just what the company needed to keep its momentum going. Here's how it could reach new all-time highs. During an interim U.K. phase 3 clinical data release, NVX-CoV2373 demonstrated 96% immune protection against COVID-19 and 86% efficacy vs. the mutant, more infectious, U.K. strain of SARS-CoV-2. Together, its effectiveness averages to 89.3%. The vaccine was well-tolerated, with a slightly higher occurrence of severe side effects among those who took the vaccine (1.1%) compared to placebo (0.7%).

During another phase 2b clinical trial in South Africa, NVX-CoV2373 demonstrated only 49% efficacy against the mutated and more resistant South Africa coronavirus strain. However, its immune protection went up to 60% for patients who were HIV-negative. South Africa has one of the highest rates of HIV infection in the world.

The vaccine data is spectacular when combating the coronavirus' original strain, slightly less so against the U.K. strain,and rather abysmal against the South Africa strain. However, nearly one in three patients enrolled in Novavax's South Africa investigation had a previous COVID-19 infection.

More or less, the data illustrates that naturally occurring neutralizing antibodies are not as effective against the South African strain, and that patients who received NVX-CoV2373 have superior results. It leaves the possibility for the company to investigate the use of booster shots, or different types of adjuvants, to take its results up a notch.

Given the results, regulatory approval could come as early as the second quarter of 2021. Right now, Novavax has more than 246.7 million doses of government preorders from the U.S., U.K., Canada, Australia, and New Zealand. Assuming a price tag of $10 per dose, the company could have close to $2.5 billion in revenue (almost) in the bag. That is quite significant, considering the company's market cap is close to $11 billion. 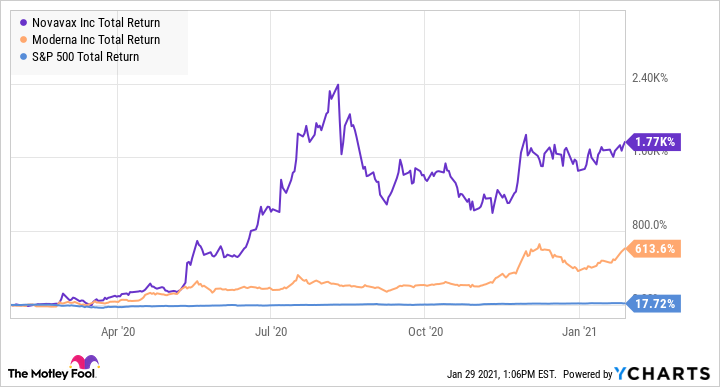 By the second half of this year, Novavax should have secured the capacity to manufacture 2 billion doses of its experimental vaccine per year. Also, this recent data release came in the nick of time. Novavax has already spent much of the $2 billion it received in grant funding from Operation Warp Speed initiatives.

Novavax has less than $600 million in cash and equivalents left to fund its research and development expenses. Commercial revenues will finally be able to counteract the company's net losses.

Even after a huge run-up, Novavax could still be undervalued if it can indeed fulfill more than 2 billion vaccine orders of NVX-CoV2373 per year. Given its data release, the company is one step closer to that goal. If you are on the lookout for solid biotech or coronavirus stocks, it'd be a crime not to consider Novavax.