Please ensure Javascript is enabled for purposes of website accessibility
Log In Help Join The Motley Fool
Free Article Join Over 1 Million Premium Members And Get More In-Depth Stock Guidance and Research
By Taylor Carmichael - Feb 3, 2021 at 8:05AM

Glu Mobile (GLUU) is an interesting small-cap in the world of free video games for cellphones. It's actually a high-growth business -- a growth not different from what we witnessed in  Activision Blizzard's(ATVI 0.33%) acquisition of King Entertainment, maker of Candy Crush Saga, for $5.9 billion.

How do mobile companies make money when the games are free to play? Companies like Glu are adept at creating addictive games that are fun. You are encouraged in various ways to drop a dime and buy additional powers, unlock a new weapon, or purchase a beloved character. I am currently addicted to Disney Sorcerer's Arena, my favorite Glu game by far. I suspect I will never get Donald Duck unless I pay a little money. I might have to, I really like that angry duck.

Glu had $158 million in revenue in the third quarter, with profit margins over 8%. And the company's a cash machine, generating $31 million in free cash flow in the quarter. Disney Sorcerer's Arena is actually a minor title for the company, akin to Diner Dash Adventures or Kim Kardashian: Hollywood. CFO Eric Ludwig refers to these titles using the baseball lingo "singles," as each one brings in $25 million to $75 million a year in revenue. More important titles are Covet Fashion and Tap Sports Baseball -- "doubles" that make $75 million to $150 million a year in sales. And Glu's most important title is a "triple," Design Home, which is expected to bring in $210 million in revenue for 2020.

In 2021, Glu is introducing a new game, Table & Taste. This game is from its Crowdstar studio, the people responsible for Design Home and Covet Fashion. Glu's acquisition of Crowdstar in 2016 for $45 million was a brilliant move.

As a matter of fact, all of Glu's acquisitions have been fantastic. The company has acquired a multitude of tiny game studios: Blammo Games in 2011, Pick 6 Studios in 2013, Playfirst in 2014, and Crowdster in 2016. Glu also bought the rights to the Deer Hunter game from Atari. What was the purchase price of all these acquisitions? $79 million. And how much revenue has the company earned from these acquisitions? $2.2 billion. That's a 27-bagger in 10 years.

Yet Glu's stock has been a loser since its IPO

If you bought shares of Glu back at its initial public offering in 2007, you've been underwater for a long time. This is an ugly chart. 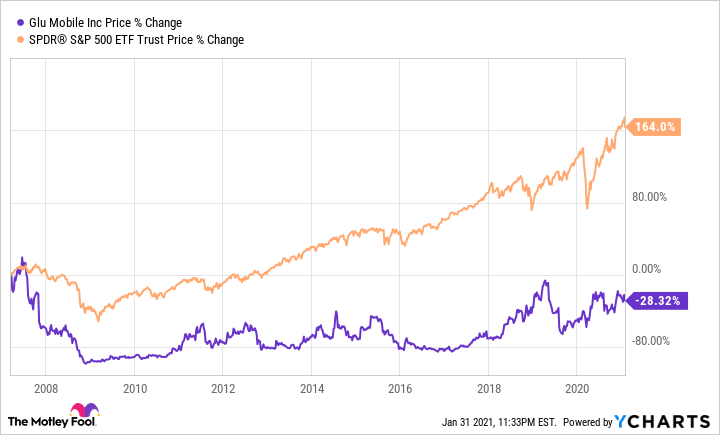 That's some long-suffering shareholders. On the other hand, if you bought your shares five years ago, you've quadrupled your money and stomped the market. Perceptions shift, and with it valuations. When Glu went public in 2007, its mobile games included Deer Hunter, Diner Dash, Monopoly, and World Series of Poker. Now Glu has an entirely different set of games, and has proven itself adept at spotting talent and acquiring it. The company is growing nicely and has achieved profitability.

In my view, the collaboration with Disney (DIS -2.00%) is a major coup. Disney has worked with Entertainment Arts (EA 1.96%) for a long time, and has recently announced a collaboration with Ubisoft (UBSFY 1.71%). Yet when developing a mobile game for its animated universe, the House of Mouse selected the tiny Glu.

While it's not a major financial win for Glu (yet), Disney Sorcerer's Arena a fantastic mobile game. I'm impressed with the software and how beautiful the game is. It would not shock me if Disney were to expand this partnership, if and when the company decides to develop a Star Wars game, or an Avatar game, for cellphones.

The mobile market is a key driver in the video game industry. For instance, when Activision introduced a free version of Call of Duty for cellphones (Call of Duty: Warzone) the game was downloaded 300 million times. Mobile companies like Glu are highly valuable not only because of their ability to create fun games for a small screen, but also their knowledge of how to monetize them.

It's entirely possible that one of the larger players will want to acquire Glu for that very reason. Glu is still quite small, with a $1.5 billion market cap. And it's positively cheap, with a price-to-sales ratio of three and a forward P/E of 17. Glu has 48% revenue growth and is printing cash right now. I'm bullish on this name, and I expect the stock to go a lot higher from here.