Some of the hottest retail concepts could be a bargain for investors.

Shopping may be the last thing on people's minds as some are possibly still paying down holiday sprees, but it's always the right time to shop for retail stocks. These are interesting times as e-commerce threatens traditional retail, yet some chains are finding ways to thrive in this challenging climate.

Five Below (FIVE -0.39%), Costco (COST 1.35%), and Tanger Factory Outlet Centers (SKT 1.69%) are three of the best-positioned retailers in 2021. One's a deep discounter. One's the leading warehouse club operator. One's a factory outlet mall operator. The businesses differ, but momentum appears to be on their side this year. 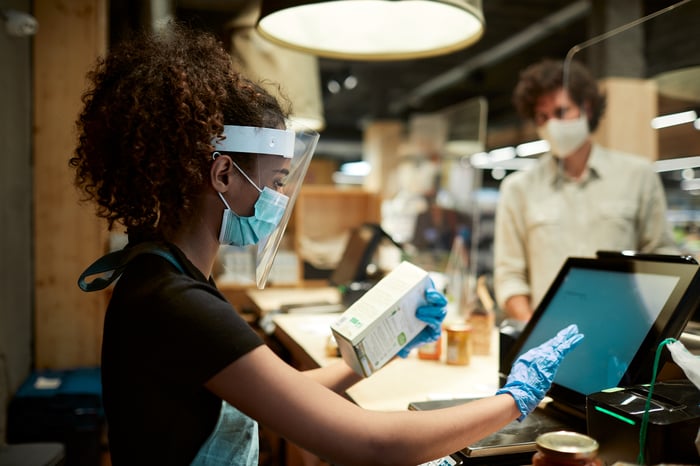 There aren't too many brick-and-mortar chains that are in better shape now than they were a year ago, and Five Below is on that thin list. The deep discounter that, true to its name, primarily stocks items at a $5 price point or below has bounced back after having to temporarily close its stores during the early weeks of the pandemic.

Net sales climbed 26% to $476.6 million in its latest quarter, the fiscal third quarter that concluded at the end of October. Expansion is a part of that growth -- as Five Below now has more than 1,000 locations across the country -- but comps rose a mind-blowing 12.8% for the period. Think about what that means. This isn't a nearly 13% increase in sales at the individual store level relative to the spring or early summer period, when pandemic lockdowns gripped the country. This is double-digit improvement from the early fall of 2019, when COVID-19 wasn't even a thing and the economy was booming.

Five Below, which appeals to a young crowd of deal seekers, is also killing it on the bottom line. Net income doubled to $0.36 a share in the fiscal third quarter, again pitted against its performance a year ago when everything was humming along nicely. Five Below's bounce has come mostly from its physical stores, but it's just starting to scratch the surface in e-commerce.

Costco has been a rock star in the new normal. Unlike many traditional retailers, the warehouse club operator remained open when the COVID-19 crisis hit, selling essential items to keep homes well stocked with food, cleaning supplies, and toilet paper. (Do you remember those crazy toilet paper shortage times?)

However, now that the playing field is level, with most concepts fully or close to fully open, Costco is still rising above. The chain turned heads earlier this week by posting a stunning 15.7% increase in adjusted comps for the month of January, but those heads never should've turned away. This has been the eighth consecutive month of double-digit comps growth at Costco.

The membership model works. Costco's low overhead and shrewd purchasing deliver the strong value points that shoppers crave. However, the company showed that even an old warehouse club operator can learn some new economy tricks as e-commerce sales more than doubled last month.

One of the more unusual names to get caught up in the short squeeze of late January was Tanger Factory Outlet Centers. Shares had a wild run, nearly doubling from less than $13 in mid-January within 10 trading days. Most of that speculative uptick has reversed, and you're going to like what you can buy these days.

Tanger, a real estate investment trust (REIT) that operates 38 upscale outlet shopping centers, suspended its quarterly distributions in early 2020, as the pandemic first struck. Now that it's profitable, the payouts are back. The new yield of 5.4% is solid in today's interest rate climate, but the dividend is just half of what Tanger was shelling out a year ago. If the business is able to get back to year-ago levels -- and it's getting there with shopper traffic at 90% of where it was and a tenant occupancy rate of nearly 92% -- the dividend could double by the end of this year.

E-commerce will eventually take a bite out of Tanger. An online angle is a possibility for Five Below and already a reality for Costco, but it's not in the cards here. However, it's hard not to like what Tanger brings to the table right now. Its open-air outlet centers are widely perceived to be safer than enclosed shopping malls, and offering brand-name goods at big discounts hits the right notes in a recession.